1917 is the powerful new World War I drama from Skyfall's Sam Mendes. Remarkably, it plays out in the illusion of one long, unbroken shot, taking us into the trenches, through no man's land and beyond, as two British soldiers valiantly try to deliver a life-saving message to their own forces.

The movie also showcases the picturesque artistry of acclaimed cinematographer Roger Deakins, who, along with Mendes, is being widely touted for Oscar success. Deakins is one of the greatest cinematographers working in Hollywood today, and has a cinematic resume few could dream of – here are his five most beautifully shot movies.

Overlooked at the box office on its initial release, Frank Darabont’s The Shawshank Redemption would soon garner the acclaim it deserved on DVD.

Adapted from Stephen King’s short story, Shawshank centres around an innocent man’s quest for salvation after he’s incarcerated for the murder of his wife. However, salvation comes when Andy (Tim Robbins) makes friends with ‘lifer’ Red (Morgan Freeman).

The film is steeped in a beautiful golden tint that harks back to the era of Hollywood prestige pictures of the past, and this is all courtesy of Deakins’s Oscar-nominated work behind the camera.

His cinematography works in perfect harmony with the themes of the film, as he manages to capture both the murky underbelly of the prison system and also the resilience of the human spirit, mixing light and shade in profound ways.

The snowy landscapes of North Dakota were never the same after the Coen brothers and Deakins’s magnificent collaboration on Fargo.

In their third collaboration with the acclaimed director of photography, the Coens depict the snow-blanketed wastes as a complex, ironic mixture of harmony and disturbance.

Whereas central character Marge Gunderson (Frances McDormand) is very much at one with her surroundings, murderous criminals Carl (Steve Buscemi) and Gaear (Peter Stormare) exploit the vast isolation for their own ends.

What could be a visually repetitive landscape is transformed thanks to Deakins’s eye for beauty, not to mention his implicit understanding of the Coens’ dark humour.

3. The Assassination of Jesse James by the Coward Robert Ford (2007)

It is impossible to talk about Andrew Dominik’s The Assassination of Jesse James without mentioning the stunning, night-time train robbery scene, and how Deakins’s technical wizardry brings it all to life.

A beam of light snakes its way through a dark forest while a gang of criminals, led by Brad Pitt’s Jesse James, prepare to rob it. The rich blend of hues and use of natural light mean that the scene carries a breath-taking sense of authenticity, and this is true of Deakins’s sublime work throughout the rest of the film.

In-keeping with Pitt’s melancholy performance, portraying a notorious outlaw who’s reflecting on his life, Deakins’s cinematography is both stark and starkly beautiful.

Moviegoers can argue all day about who is the best James Bond actor. But it’s Deakins who helped deliver what is arguably the most visually arresting 007 movie to date.

Skyfall is the 23rd Bond movie, directed by Sam Mendes in his third collaboration with Deakins, and they bring a ravishing, complex look to the movie that deepens our understanding of Daniel Craig’s melancholic, introspective secret agent.

Deakins has always been drawn to more character-driven material and he’s therefore the ideal fit for one of the most personal Bond movies to date, one that culminates in the return to 007’s home.

As cinematographer, Deakins drinks in a host of landscapes and set-pieces, from the rich red/golden hues of Macau to the earthy tones of Scotland. And certain set-pieces are stunning, particularly the glass-laden fight scene that plays out in silhouette with a neon backdrop. Bond never looked so good.

Blade Runner 2049 finally won Roger Deakins his first (and massively overdue) Oscar. This sequel to Ridley Scott’s 1982 masterpiece is nothing short of a jaw-dropping, transporting experience thanks to Deakins’s work, which virtually shimmers and sheens in its gorgeous depiction of a near-future Los Angeles.

Both director Denis Villeneuve and Deakins agonised over how to craft this experience: Deakins said they spent a lot of time looking at the way architects use light in modern buildings, and the way light interacts with big structures.

This pays off in a big way: Blade Runner 2049 is not just one of the most exquisitely shot movies in recent years, it uses its visual palette to deepen our understanding of both the characters and the narrative. Such is the genius of Roger Deakins.

Click here to book your tickets for 1917, on release now in Cineworld. Got some favourite Roger Deakins movies of your own? And do you think he's got a chance of winning his second Oscar? Tweet us your thoughts @Cineworld.

Andy Furlong is a writer who blogs for Cineworld as part of our news team. 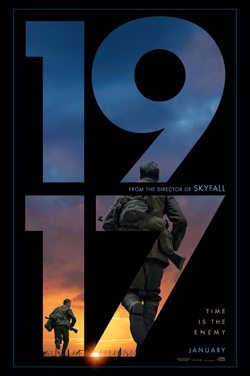 Bond movies revisited: The Man with the Golden Gun

1917: go behind the scenes with director Sam Mendes