A delicious sense of anticipation accompanies the release of a new James Bond theme. And this year's No Time To Die is graced with the moody, distinctive vocals of Billie Eilish, who, at the age of 18, is the youngest-ever performer of a Bond song.

Eilish has the honour of opening Daniel Craig's final 007 movie, which is directed by Cary Fukunaga and co-written by Phoebe Waller-Bridge. In the movie, Bond must confront a deadly new enemy named Safin (Bohemian Rhapsody Oscar-winner Rami Malek) who shares a connection with 007's wife Madeleine Swann (Lea Seydoux, who returns from previous movie Spectre).

There's a definite Shirley Manson/The World Is Not Enough vibe to Eilish's arresting performance, accentuated by the suitably Bondian swirls of brass and strings from composer Hans Zimmer. And the lyrics are full of portent, alluding to a sense of lies and betrayal that link back to the film's trailer; in it, Bond is shocked to discover his new spouse has a deadly secret that may well bring an end to his tenure as Britain's greatest secret agent.

Are we, therefore, looking at the anthem that will accompany the death of 007? Either way, it's a great theme, following in the footsteps of Sam Smith's 'Writing's On The Wall' (Spectre), Adele's Oscar-winning 'Skyfall', Alicia Keys and Jack White's 'Another Time To Die' (Quantum of Solace) and Chris Cornell's 'You Know My Name' (Casino Royale).

That Zimmer is involved in the song itself hopefully means that the melody will be incorporated into his film score. This didn't happen with Thomas Newman's scores for Spectre or Skyfall, bar very brief, standalone statements. It also didn't happen with David Arnold's score for Quantum of Solace, although the Chris Cornell melody was laced into Casino Royale.

Eilish will be performing 'No Time To Die' at the 2020 Brit awards alongside her brother and co-writer Finneas, plus Zimmer and guitarist Johnny Marr. No Time To Die is released in Cineworld cinemas on the 2nd of April, so tweet us your thoughts on the song @Cineworld. 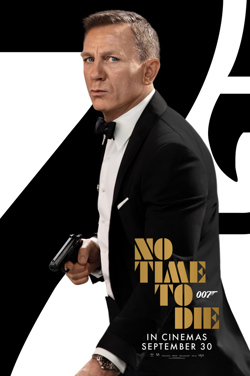 Bond movies revisited: The World Is Not Enough

Ana de Armas: the meteoric rise of the No Time To Die star