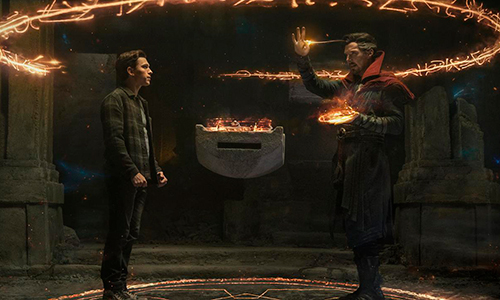 Is it finally OK to launch into a Spider-Man: No Way Home blog post without a spoiler warning? We reckon so – after, the blockbusting Marvel Studios movie has been out for nearly a month.

After shattering umpteen box office records worldwide, No Way Home has left us basking in a warm nostalgic glow. Much of that is down to the return of two former Spider-Men: Tobey Maguire, who played the role from 2002 to 2007, and Andrew Garfield, who donned the suit in 2012 and 2014.

Together, the two Spidey veterans join Tom Holland's incarnation of Peter Parker for a dazzling multiverse showdown against some classic villains including the menacing Green Goblin (Willem Dafoe). At the same time, the event is loaded with pathos as the various Spideys bond over their shared traumas – Garfield's character's loss of his beloved Gwen Stacey (Emma Stone) strikes a chord with Holland's grieving Peter in the wake of Aunt May's (Marisa Tomei) death.

The movie has granted dignity and closure to Garfield's take on the Spider-Man character – neither of his two movies were particularly well-received, although the first, The Amazing Spider-Man, was a box office hit.

Only in No Way Home has the canonical significance of Garfield's portrayal been recognised. In a lengthy interview with Variety, Garfield has discussed his return to the role, after repeatedly having to deflect the news in the run-up to No Way Home's release.

"I wasn’t expecting to ever have a conversation again about potentially playing Peter Parker," he explained. "I felt very excited to just to be a fan again. But I got this call from Amy Pascal and Kevin Feige and Jon Watts with this idea. It was immediately undeniable. It sounded incredibly fun, incredibly spiritual — trippy and thematically interesting.

"On a base level, as a Spider-Man fan, just the idea of seeing three Spider-Men in the same frame was enough. The pitch was really, really enticing. They said, 'You played this character in your way and what would you want to explore if you had an opportunity? If you were dumped into this other universe and faced with this younger you and this older you, how will you respond?'"

"I am so grateful. I’m just really, really grateful that I got to tie up some loose ends for the Peter that I was playing. I love that character and I’m grateful that I got to work with these incredible actors, this incredible director, and Marvel in conjunction with Sony. It was joyful, and a feeling of closure for me. There was so many unanswered questions for my Peter, where we left it. I got to step back in and get some healing for him. And also really supporting [Holland’s] Peter, and honoring his character completing that trilogy, not distracting or detracting from it."

So, what about the future of Garfield's Spider-Man? Garfield won't be drawn on those details, but it finally sounds like he's made peace with Spider-Man after playing down his involvement and expressing disappointment in his two solo movies.

"I mean, yes, definitely open to something if it felt right," Garfield says. "Peter and Spider-Man, those characters are all about service, to the greater good and the many. He’s a working-class boy from Queens that knows struggle and loss and is deeply empathetic. I would try to borrow Peter Parker’s ethical framework in that, if there was an opportunity to step back in and tell more of that story, I would have to feel very sure and certain in myself."

Has this made you want to experience No Way Home all over again? Then click here to book your tickets for Spider-Man: No Way Home, and blow away the new year cobwebs in Cineworld.

What's On At Cineworld: watch our first episode of 2022