While we gear up for the Avengers' battle with the evil Thanos in Infinity War, Marvel have released their official synopsis for the movie.

We already know that the main ensemble comprises 32 Marvel characters, with the remaining cast inflating the numbers to somewhere between 65 and 80, depending on reports.

The first trailer brought the house down back in December, racking up 230 million views in a mere 24 hours. As the dreaded Thanos (Josh Brolin) attempts to wreak havoc on planet Earth in pursuit of the magical Infinity Stones, it falls to the various Marvel heroes to stop him.

As well as old hands including Iron Man (Robert Downey Jr.) and Captain America (Chris Evans), the movie also brings in the likes of Doctor Strange (Benedict Cumberbatch), Spider-Man (Tom Holland) and the Guardians of the Galaxy for the battle to end all battles.

Here's the official word from Marvel on what to expect:

An unprecedented cinematic journey ten years in the making and spanning the entire Marvel Cinematic Universe, Marvel Studios’ Avengers: Infinity War brings to the screen the ultimate, deadliest showdown of all time. The Avengers and their super hero allies must willing to sacrifice it all in an attempt to defeat the power of Thanos before his blitz of devastation and ruin puts an end to the universe.

A 'blitz of devastation' sounds appropriately ominous, perhaps alluding to the fact that not all the Avengers will make it out of this movie, or its 2019 sequel, alive...

Check out our breakdown of the 32 confirmed Avengers: Infinity War characters. The movie is released on 27th April. 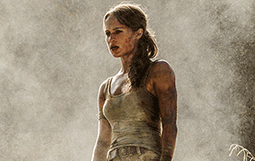