Who's missing from the Avengers: Infinity War trailer?

The monumental Avengers: Infinity War trailer is stuffed full of more Marvel heroes than you can shake a Tesseract at. Even so, there isn't room for everybody. Here are the key characters who are missing...

The most significant and surprising absence is Paul Rudd's rogueish, shrinking Scott Lang. His absence is all the more palpable given he made such an impression with his appearance in Captain America: Civil War, in which he both shrank down to sabotage Iron Man's suit and enlarged himself to gargantuan proportions. Given sequel Ant-Man and the Wasp is the first Marvel epic to be released after Infinity War, we imagine this storyline has significant ramifications for Lang's character.

Rudd's participation has been confirmed through on-set photos and Instagram videos showing him suited up (including this one posted by Gamora herself, Zoe Saldana). Still, even if we don't know the nature of his involvement, his incredible shrinking powers will no doubt come in handy in the battle against Thanos (Josh Brolin).

The last time we properly saw Tony Stark's (Robert Downey Jr.) paramour (played by everyone's favourite wellness specialist Gwyneth Paltrow) was in 2013's Iron Man 3. At the end of that movie Pepper stepped out from behind the desk to kick the ass of villain Aldrich Killian (Guy Pearce), but we found out in the ensuing Civil War that she and Tony were "taking a break".

Nevertheless Pepper made a brief appearance in this summer's Spider-Man: Homecoming when we saw Tony proposing to her. Are they still engaged – or, better still, married – during the events of Infinity War? Pepper was deemed important enough to share Vanity Fair cover space with the likes of Star Lord (Chris Pratt) and Doctor Strange (Benedict Cumberbatch).

Even so, with that shot of Tony looking seriously upset right at the start of the trailer we hope something bad doesn't happen to her...

He does have a valuable role to play within the MCU: 2015's Age of Ultron introduced us to his all-American family life when he sheltered our besieged team at his farm. We're waiting for another such moment that will flesh out his character to a similar degree.

One thing he does sport in Infinity War is a new haircut seemingly derived from an 80s pop group, so it's not like he hasn't had an upgrade of his own.

We're still waiting to see how Evangeline Lilly's character Hope van Dyne fits into the wider MCU – her first (and, to date, only) appearance was in 2015's Ant-Man, which culminated in the reveal of her Wasp suit.

Given she shares title credit in 2018's Ant-Man and the Wasp she clearly has an important part to play in the ongoing Marvel mythology. Back in 2016 when Infinity War was proposed as two halves of a wider movie, Lilly told Blastr that "she'll be in the second part".

Given that Infinity War is now its own entity with the as-yet-untitled follow-up also serving as its own movie, it remains to be seen how Wasp will factor in. Like Pepper Potts, Wasp gets her own space on the recent Vanity Fair covers so we can expect her to play a significant role.

In this year's Guardians of the Galaxy Vol. 2 blue-skinned Nebula (Karen Gillan) switched sides to aid the Guardians, namely her sister Gamora, in their fight against the tyrannical Ego (Kurt Russell).

Even so, Nebula isn't one to take orders from others and the movie culminated with her choosing to leave and defeat the evil Thanos herself. Given the latter is her adopted father we expect this to be one of the most intriguing and emotional character arcs of the entire movie.

Back in August Gillan confirmed both her involvement and the surprising news that Nebula is due to get a new friend.

"I know who her new BFF is, and I can't tell you," Gillan told Fandango. "I can't, but I promise you it's brilliant and unexpected, and just so good."

And here are two significant villains who do show up...

You can't conquer the world alone, even if you are the almighty Thanos. He's roped in some help from his Black Order minions, familiar to Marvel experts as a lethal race of aliens who assist Thanos in his quest to conquer all the known worlds.

Chief among them is Proxima Midnight, a spear-throwing warrior created by Jonathan Hickman and Mike Deodato, who first appeared in New Avengers Vol. 3 #8 (published September 2013). Here she is in her original comic book form...

And here she is in the trailer, launching said spear at Captain America (Chris Evans)...

Another dreaded Black Order servant, Corvus is Thanos' second in command and also Proxima's husband, wielding the aforementioned glaive (a bladed weapon) with deadly intent as he looks to reclaim the Infinity Stones for his master. This is what he originally looked like...

Although we don't get a clear shot of him in the trailer we can clearly see the glaive piercing Vision's (Paul Bettany) head in an apparent attempt to remove the Mind Stone.

What did we miss from the Avengers: Infinity War trailer? Let us know @Cineworld. 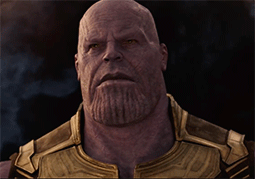