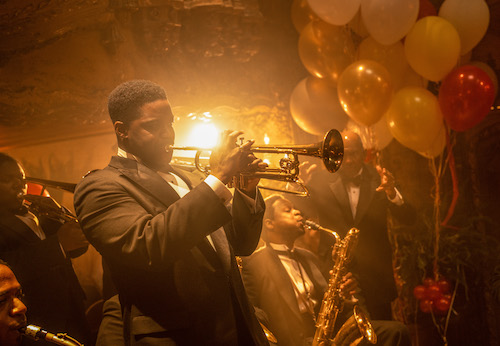 Raucous new drama Babylon blows away our pre-conceptions of late 1920s Hollywood as a haven of chic and debonair behaviour. Writer-director Damien Chazelle, who made Whiplash and La La Land, unlocks his nasty side in this three-hour onslaught of sin, one that's set around the pivotal transition from silent cinema to sound pictures.

Margot Robbie and Brad Pitt give memorable performances as, respectively, the wild child new starlet Nellie LaRoy and the ageing screen veteran Jack Conrad. Their stories are just two of the strands on display in Chazelle's sprawling canvas; also thrown in the mix is aspiring studio executive Manny (Diego Calva) whose destiny intersects and overlaps with that of Nellie and Jack.

The movie, on release at Cineworld from January 20, is brought together via the propulsive and insistent presence of Justin Hurwitz's score. The music recently won a Golden Globe and continues the fruitful partnership between Chazelle and Hurwitz that has already yielded two Oscars for La La Land and a previous Golden Globe for Neil Armstrong drama First Man.

We've rounded up several Babylon soundtrack highlights that pinpoint the music as the beating, crazy and memorable heart of the movie.

The score is centrally held together by several recurring themes. The plaintive theme for Nellie and Manny is one of them, and it's put through several contortions during the score. It mostly appears as a wistful ragtime piano piece, accompanying the pipe dreams and ambitions of two characters who are desperate to make their way up the Hollywood greasy pole.

Fans of Hurwitz's previous work for Chazelle, namely the nostalgic and gorgeous La La Land, will find a lot to like in this piece.

AKA the 'go wild' piece that appeared in the first Babylon trailer. Hurwitz's trumpet section goes full-throttle and blows the roof off, before eventually devolving into a slinkier, slower-pace jazz piece come the end.

'Voodoo Mama' is one of several tracks in the movie that is performed diegetically – in other words, within the context of the scene. It's performed during the opening mansion party sequence by ambitious jazz trumpeter Sidney Palmer (Jovan Adepo).

One of Babylon's most entertaining sequences accompanies the frantic quest to secure a movie camera for Jack Conrad's latest shoot. As all hell breaks loose with multiple silent pictures all shooting simultaneously in the same area, the emergent Manny manages to locate a camera right at the moment of golden hour when the sunset casts a lustrous glow over the set.

Hurwitz's ironically beautiful and parodically overblown orchestral crescendos tap into the absurdity of the scene, as the ultimate outsider, Manny, makes everything come together for maximal Hollywood romanticism.

Nellie and Manny's theme gets treated to a blusterous, up-tempo, foot-tapping variation for throaty saxophones. This piece is another that's stated several times during the soundtrack and, as the title suggests, accompanies various characters 'hustling' and bustling their way around the chaos of a movie set.

Li Jun Li's character Lady Fay gets a slinky, seductive piece of her own. Lady Fay breaks down social conventions in her role as a cabaret singer, flaunting her sexuality with provocative and amusing lyrics. Yet she's also an intertitle writer for silent pictures and is part of the key group attached to both Nellie and Jack.

The most luscious rendition of Lady Fay's theme comes in this track as Hurwitz deploys the gorgeous Oriental texture of the erhu (a bowed Chinese instrument that is regularly deployed in Hollywood film scores, and which is played diegetically in the movie).

Who could ever have imagined Ravel's classic staple Bolero would anticipate a sequence of graphic projectile vomiting? Hurwitz demonstrates both a macabre wit and a keen sense of musical context in this repetitious and increasingly ostentatious piece that fully captures Nellie's coke-fuelled meltdown at a posh Hollywood party.

Bolero was first unleashed on the world in 1928, the same year in which the scene takes place. The waltz-like movement of the music finally attains shrieking and hysterical proportions as Nellie rubs food in her face and proceeds to chunder all over the face of her famous host, William Randolph Hearst.

Babylon is ultimately a movie that's tainted with tragedy. Pitt gives an effectively melancholic performance as the one-time wonder who finds himself out in the cold when sound pictures expose his stiff acting style.

The recurrent 'Gold Coast Rhythm' theme, introduced early on in the movie, gets a downbeat, cocktail/lounge jazz iteration as Jack comes to terms with the apparent futility of his career, not to mention his several failed marriages.

Another dietetic gem is Sidney's trumpet performance of the Gold Coast theme. The tone of the piece may well encapsulate everything that is brazen and outsized, and yet ultimately sad, about Babylon: the mournful pitch of the trumpet sounds an elegy for human hubris and arrogance.

Hurwitz's music lies right at the heart of our understanding of the film, variously amusing, outrageous and deeply, bittersweetly felt while adapting to all manner of different period idioms. Let's see if an Oscar nomination is in the score's sights next.

Are you ready for the wildest party of the year? Click here to book your tickets for Babylon, opening at Cineworld on January 20.