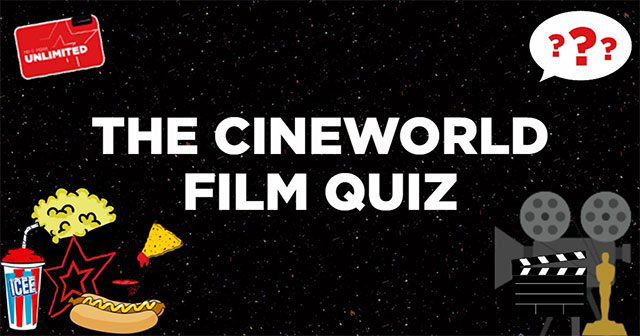 Did you take part in the inaugural Cineworld Film Quiz? We asked influencer Daniel J. Layton to host and it went down a treat, with Cineworlders wracking their brains as to their film knowledge.

Quizzes are proving essential to taking our minds off lockdown. So have you thought of creating your own? If so, take inspiration from our selection of questions and answers below.

ROUND ONE – BOX OFFICE RECORDS

2. What is the highest-grossing fully-animated film at the global box office?

3. What is the highest-grossing fully-animated film at the UK box office?

4. Which James Bond film is the highest-grossing in the UK so far?

5. Which Oscar-winner for Best Picture is the highest-grossing at the UK box office in the last 20 years?

6. Among the following three films, which took more money at the UK box office – Joker, The Dark Knight Rises or Dunkirk?

7. Which film has had the highest-ever global box office (unadjusted for inflation)?

8. What film has had the highest-ever UK box office?

9. What is the only film in the global box office top 100 to date that is not in the English language?

1. The record number of Oscar wins for a single film is 11, and only three films have managed it. What are they?

Ben Hur, Titanic and Lord of the Rings: The Return of the King.

2. Meryl Streep has been nominated for a record number of Oscars. How many nominations has she received?

The Silence of the Lambs

4. What was the first animated film to be nominated for Best Picture?

Beauty and the Beast

7. What was the winner of the Best Original Song Oscar at the 2020 Oscars?

8. Who was the first, and, to date, only, woman to win the Oscar for Best Director?

Kathryn Bigelow (for The Hurt Locker)

9. Name the last film to be nominated for 14 Oscars

10. At the 2010 ceremony, two films were nominated for Best Picture that were available in 3D. What were they?

1. What was the 2019 sequel to Stanley Kubrick's The Shining?

2. Renee Zellweger won every Best Actress award going for portraying which iconic actress from The Wizard of Oz?

3. Which 1940s cinematic classic, often cited as the greatest film ever made, was nominated for nine Oscars but surprisingly only won one?

4. Which of the Godfather movies has the highest score on Rotten Tomatoes?

5. What's the name of the American actress known as the prototypical blonde bombshell who starred in 1959 classic Some Like It Hot?

7. Sunset Boulevard was named after the road of the same name. In which city can this road be found?

8. Finish this Casablanca quote: "I think this is the beginning of..."

9. Adjusted for inflation, what is the highest-grossing movie of all time?

Gone with the Wind

10. Audrey Hepburn was recognised as a film and fashion icon. Name three of her movies.

1. In litres by volume, how much popcorn does Cineworld go through in an average year?

2. What are the three regular ICEE flavours available at Cineworld?

3. What year was the first 4DX cinema opened in the UK?

4. What is the highest-grossing 4DX release ever at the UK box office?

Star Wars: The Rise of Skywalker

5. How many Cineworld cinemas are there across the UK and Ireland?

6. If you laid down all the roll-over hotdog sausages sold at Cineworld in an average year, how long in kilometres would the length be?

7. ScreenX is a 270-degree viewing experience with three screens, only available at Cineworld in the UK. When did the first Cineworld ScreenX open?

8. How many kilograms of Candy King pick and mix sweets get eaten at Cineworld in an average year?

9. Cineworld Unlimited card holders get to enjoy Unlimited screenings. How many were there in 2019?

10. How many litres of Baskin-Robbins ice cream gets served at Cineworld in an average year?

1. How many candy kanes are awarded to Glen Coco in Mean Girls?

2. Which English rock star lobbied to play the role of FranknFurter in The Rocky Horror Picture Show?

3. In Inglourious Basterds, who did Quentin Tarantino originally want to cast as Hans Landa, eventually played by Christoph Waltz?

5. The first rule of this movie is that you don't talk about this movie. What movie is it?

6. In The Big Lebowski, how many times does Jeff Bridges' character The Dude say the word 'man'?

7. What is the name of the 2003 movie lovingly known as the 'Citizen Kane of bad movies?'

8. The Princess Bride is beloved by so many. What year did it first hit cinema screens?

9. Stanley Kubrick is frequently cited as one of the most influential directors of all time. Name as many of his films as you can.

10. In Spiceworld: The Movie, a pitch is made that the girls will star in Spice Force Five. Which Quentin Tarantino movie is this a reference to?

2. Which black and white film released in the UK in 2020 starred Robert Pattinson and Willem Dafoe?

3. Charlize Theron, Margot Robbie and Nicole Kidman star in factual movie Bombshell. They play three women taking on Fox News chairman Roger Ailes, but who plays him in the film?

4. Which film released in January this year starring Daniel Kaluuya was our most recent Secret Unlimited Screening back in December?

5. Name the two family films that have made over £15 million at the UK box office so far this year?

6. Which British actor played the character of Fletcher in Guy Ritchie's The Gentlemen?

7. What is the only film that Mark Ruffalo has starred in so far this year?

8. Dev Patel starred in The Personal History of David Copperfield, released in January 2020 in the UK. What is the biggest January release he's ever starred in?

9. Who plays the mother in Taika Waititi's film Jojo Rabbit?

Inspired to create your own movie quiz? Let us know @Cineworld. 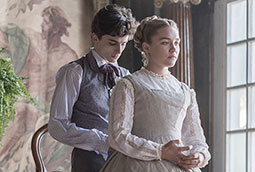 Florence Pugh has been cast in Olivia Wilde's new movie