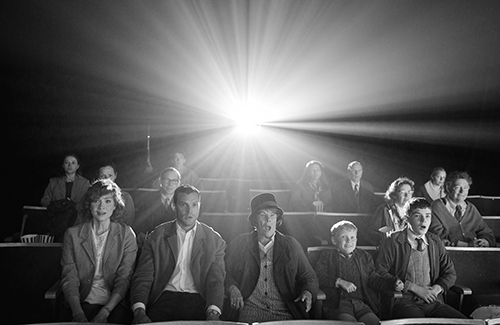 Belfast is the poignant new drama from director Kenneth Branagh, and it showcases a classic child performance from sensitive screen newcomer Jude Hill. He lights up the screen as Buddy, a vivacious youngster attempting to navigate the perils of the Troubles in 1970s Belfast. Ably supported by his Da (Jamie Dornan), Ma (Catriona Balfe) and grandparents (Judi Dench and Ciaran Hinds), Buddy discovers that love is a guiding light amidst a fractious environment, even as his family contemplates moving away from Northern Ireland to begin a new life elsewhere.

Belfast screened in advance for Cineworld Unlimited members, and viewers were unanimous in their praise for Hill's emotionally authentic performance (see the reactions here). With Belfast poised to sweep the Oscar nominations, we got to thinking about the all-time-great child performances on the big screen. Scroll down to discover our selection, as you speculate where Jude Hill's breakout turn will sit amongst the following classics.

Immortalised as the young star who presented Walt Disney with multiple Oscar statuettes for Snow White and the Seven Dwarfs, Shirley Temple was the most famous child star of her day. In the 1930s and 1940s, the cherubic Temple enchanted audiences with endearing performances in a range of family-friendly movies. However, her best arguably remains The Little Princess, the adaptation of the Frances Hodgson Burnett classic. It was Temple's last noteworthy success and the first of her movies to be filmed in lustrous TechniColor, and despite making many changes to the book, cemented her reputation as an emblem of Hollywood's Golden Age.

Years before she become the byword for glamour and elegance, Elizabeth Taylor captured the attention of audiences in the stirring horse-racing drama National Velvet, adapted from Edith Bagnold's novel. An adolescent Taylor commanded the attention as the equine-mad Velvet Brown who enlists her beloved gelding in the Grand National steeplechase. Amidst a heavyweight cast including Mickey Rooney and Angela Lansbury, Taylor holds her own, and helps guide the audience towards the tear-jerking climax.

Francois Truffaut's directorial debut remains one of the most searing and authentic accounts of disaffected youth ever put to film. Truffaut's revolutionary style favoured realism and verisimilitude, aided by a superb, naturalistic performance from the adolescent Jean-Pierre Léaud as the aimless kid Antoine. Misunderstood by his parents and authority figures, Antoine aims to find his place in the world in this seminal, unblinking drama that secured the French New Wave movement as a force to be reckoned with.

It takes an especially precocious young star to double-up as on-screen twins, but Hayley Mills, son of the noted British actor John Mills, had the gift. She charms in her portrayal of two plucky siblings who attempt to reunite their divorced parents, and the movie secured Mills' ongoing relationship with Disney. In 1998, the concept was rebooted with Lindsay Lohan in the Hayley Mills role.

Harper Lee's landmark account of moral integrity versus racial prejudice received a sublime adaptation from director Robert Mulligan and screenwriter Horton Foote. Gregory Peck commanded most of the plaudits in his Oscar-winning role as the noble lawyer Atticus Finch, but it's the young Mary Badham, playing the childhood iteration of the narrator, and Atticus' daughter, Scout, who reconnects the audience with the childhood innocence they may well have left behind.

The late director Peter Bogdanovich coaxed a remarkable performance from the young Tatum O'Neal in this classic road movie drama. She plays the tenacious Addie opposite her real-life father Ryan O'Neal (playing Moses), and their instinctive familial chemistry shines through with charm and believability. Tatum O'Neal won the Oscar for Best Supporting Actress, making her the youngest recipient of the award up to that point.

Director Franco Zeffirelli's adaptation of the 1930s King Vidor drama lays on the sentiment with a heavy trowel. However, there's no denying the remarkable impact of the young Ricky Schroeder's acting in the final scene as he bids a tragic farewell to his on-screen father Jon Voight, playing a down-and-out pugilist who makes one final, ill-fated decision to step back in the ring and prove himself. Be sure to load up on the hankies as you marvel at the inexperienced Schroeder's ability to communicate raw grief.

Steven Spielberg's timeless story of a stranded alien botanist and his human best friend takes a fantastical conceit and grounds it in a relatable sense of childhood empathy. Spielberg famously shot the movie at the eye level of his childhood performers, and also shot the movie chronologically to facilitate their emotional impact during the climax. However, it's Henry Thomas' performance as Elliot that convinces, and devastates throughout; he secured his audition by crying when remembering his dog who had died, and that same authentic instinct resonates throughout his performance.

Few World War II movies capture the hellish, surrealistic madness of conflict as effectively as Come and See. Director Elim Klimov's final movie discards any sense of narrative, instead fashioning a series of nightmarish tableaux as he depicts Nazi atrocities on the Belorussian front. The young Alexsei Kravchenko doesn't need to say anything for his performance to resonate – his acute terror at the live ammunition used on set, coupled with the fact he was hypnotised for several scenes, crosses the boundaries between fictional acting and documentary.

Christian Bale stuns in a challenging performance in this underrated Steven Spielberg war drama, adapted from J.G. Ballard's autobiographical novel. A pre-fame Bale portrays Jim, a spoilt kid raised in the colonial British enclave of Shanghai who is interred in a prison camp when the Japanese forces invade during World War II. Bale has the profound ability to portray Jim as a mixture of naive and willingly obtuse as his rarified upbringing blinds him to the tangible realities of conflict, and his sense of emotional awakening come the ending is quite palpable.

Every kid raised in the 1990s wanted to be Kevin McAllister, the Chicago kid left at home alone by his family at Christmas time. It was a credit to Macaulay Culkin's ingratiating though undeniably effective performance, as he brings childhood energy and a sense of poignancy to the role, before clearly revelling in the battle between on-screen crooks Joe Pesci and Daniel Stern. Such was the enormous success of Home Alone that Culkin was propelled to a short-lived position as the world's most successful childhood star.

Years before she was Mary-Jane in the Tobey Maguire Spider-Man trilogy, Kirsten Dunst chilled the blood as a pre-teen vampire in this adaptation of Anne Rice's novel. Her character, Claudia, belies her cherubic appearance and curls by assaying the vicious, bloodthirsty and temperamental spirit of a bloodsucker forever cursed to live in a child's body, a complex challenge that Dunst pulls off admirably. She more than holds her own against her A-list stars Tom Cruise and Brad Pitt.

M. Night Shyamalan's ghostly drama isn't really a horror movie, although there are scares throughout. It's really a story of loss and grief, and the conviction present in the performances is what sells it. The young Haley Joel Osment is sensational as the persecuted Cole Sear who can "see dead people", and he valiantly seeks help from haunted therapist Malcolm Crowe (an excellent Bruce Willis). Osment's raw sensitivity and acuity saw him awarded with a much-deserved Oscar nomination.

This magic-realist fable is set in the Louisiana environment known as 'the Bathtub', a delta that is prone to flooding during storm season. The challenges of the landscape, and the impoverished nature of those occupying it, propels young girl Hushpuppy to envisage a fantastical scenario involving oversized monsters, an allegorical representation of her way of dealing with the world. In the central role, Quvenzhané Wallis is utterly believable and delightful, building a portrayal of a vivacious child who refuses to be beaten down by her tough circumstances.

Jacob Tremblay communicates wisdom beyond his years in this harrowing yet ultimately inspiring drama, which is adapted from Emma Donoghue's novel. Tremblay plays a young boy who has been raised entirely within the confines of a single room by his mother (an Oscar-winning Brie Larson), with the result that it has defined his entire perception of the world. Tremblay's ability to convey a mixture of curiosity and anger, mixed with a palpable sense of wonder as the narrative proceeds, is, by turns, crushingly sad and cathartic.

Belfast is released in Cineworld cinemas on 21st January. Is Jude Hill's performance in the movie one of the greatest child turns of all time? Let us know @Cineworld.