The reactions are in from this week's Unlimited screening of Mark Wahlberg thriller Mile 22. This all-action popcorn fest casts Wahlberg as a secretive government agent tasked with transporting a political prisoner (The Raid's Iko Uwais) to a designated point amid a hail of gunfire.

We'll start with this from Chris, who praises the level of insane action.

Fantastic, it's been a long time since I've seen a more visceral, exciting, bloodthirsty action film such as this. Moments of humour, explosive action & an unexpected twist too boot. 5/5 #Mile22

Mark says the movie lives up to its 18-rated billing and then some.

Really enjoyed it!
So nice having an action movie be an 18 and not cut to ribbons for a 15 or a 12A to get more people in!
The day they made the last Die Hard a 12A was a sad day in movie history! @markwahlberg & @LaurenCohan on top form!

Excellent Film made for Wahlberg, good performances and plenty of non stop action. Script was a little OTT but the direction and camera work was good. Definately recommended

And Victoria is another audience member who enjoyed the movie's intensity.

On the other hand, Anita says she found the story to be a muddled disappointment.

It was too predictable. The dialogue was hard to make out. On the whole a bit disappointing. Won't be on my list to see again, that's for sure! #mile22 #CineworldUnlimited

Were you at last night's screening? If so, tweet us your responses @Cineworld and using #CineworldUnlimited. Mile 22 goes on nationwide release on 19th September.

And your run of Unlimited screenings doesn't end there. We are, of course, talking about suspenseful thriller A Simple Favour, starring Anna Kendrick and Blake Lively and directed, intriguingly, by Bridesmaids filmmaker Paul Feig. The movie stars Kendrick as a mummy blogger investigating the mysterious disappearance of her socialite friend (Lively), blending Feig's characteristic dark humour with all manner of twists and turns.

The film screens in advance on Tuesday 18th September – check out the trailer below.

Co-starring Crazy Rich Asians breakout Henry Golding, critics have agreed this is a stylish, compelling and unpredictable movie that sees its director and stars branch off in unexpected directions.

Click here to book your tickets for A Simple Favour, screening in advance on Tuesday 18th September. Tweet us @Cineworld and using #CineworldUnlimited when you've secured your seat.

And your Unlimited journey doesn't stop there – Bradley Cooper's critically lauded directorial debut A Star Is Born is screening on 27th September. This musical drama is Hollywood's fourth take on the enduring rags to riches story, starring Cooper as a tortured country musician who coaches an introverted yet talented singer (Lady Gaga) in the art of stardom. The film brought the house down at the recent Venice Film Festival and is drawing serious Oscar buzz – check out the trailer below.

Not yet part of the Unlimited club? A whole world of possibilities awaits. Click here to sign up to Cineworld Unlimited. 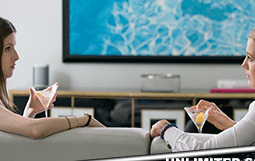