Elvis Presley on the big screen: his 5 best movies 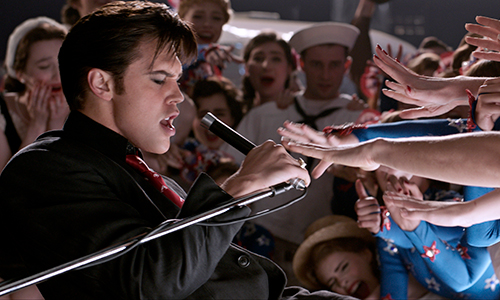 The flamboyant movie whisks us through the career of The King of Rock and Roll, one that was earmarked by searing, generation-defining fandom before descending into heartbreaking tragedy.

It hardly needs to be said that Presley outstripped the mantle of a mere performer. He singlehandedly helped bring rock and roll to the masses, inflaming conservative purists at the same time that he sent the crowds wild and enjoyed stratospheric success on the pop charts.

Butler's performance does justice to Presley's persona, a mixture of outsized energy and inner turmoil. He's a surefire candidate for the 2022 Best Actor Oscar and it demands to be seen on the biggest Cineworld screen you can find.

However, Presley wasn't just a musician. He also enjoyed a memorable, if short-lived, career on the big-screen. In anticipation of the release of the Elvis movie, we've whipped up a hip-shaking list of Presley's greatest big-screen offerings.

Before he cemented himself as The King of Rock and Roll, Elvis Presley envisaged a career as a Hollywood actor. It's fascinating to think what might have been, and Love Me Tender offers a tantalising glimpse of Presley's nascent acting abilities.

This compelling black and white Western (for which Presley composed his famously swooning ballad) centres on the four Reno brothers, the fallout from the American Civil War and the woman that comes between the siblings.

In his acting debut as the youngest Reno brother, Cliff, Presley is effectively soulful and understated. When advance sales of 'Love Me Tender' historically surpassed one million, the film's title was changed to mirror the hit single (it was initially known as The Reno Brothers).

Presley's most iconic movie and performance is a surprisingly incisive and honest look at the perils of fame and hubris. In hindsight, it's tempting to see the movie as a meta critique of Presley's own career, overwhelmed by fandom and consumed by a degree of bitterness over the limitations placed on him by Colonel Tom Parker.

Directed with verve by Richard Thorpe, Jailhouse Rock casts Presley as Vince Everett, a construction worker sent to prison for manslaughter. While incarcerated, he gets the musical bug from a fellow inmate; once he's free from the slammer, Vince begins a meteoric rise to stardom, but it comes at a cost.

The movie's most famous scene is, of course, the 'Jailhouse Rock' number itself, a hip-swinging centrepiece that amalgamates our understanding of Presley as both a musician and physical performer. Unhappy with the initial choreography of the sequence, Presley fired the creatives involved and took charge of the scene himself. The rest, as they say, is history.

Casablanca director Michael Curtiz took the reins on this hit Presley musical. In fact, Presley declared the role of Danny Fisher as his favourite, and it's not hard to see why.

Atmospherically shot in New Orleans (where the production was repeatedly beset by baying Presley fans), King Creole is boilerplate in terms of its plotting, but cast-iron in allowing Presley to showcase his inimitable charisma. His character Danny is torn between a life of crime and a promising career as a musician until crime boss Maxie (Walter Matthau) forces Danny to make a difficult choice.

Anchored around a compelling moral quandary and some of Presley's most memorable tunes, King Creole stands as a superior star vehicle.

By the early 1960s, Presley was more than just a man. He was a transcendent force of nature, a brand, and an embodiment of shifting cultural values and norms. Unfortunately, the quality of his movie projects didn't exactly improve, although Blue Hawaii is a somewhat entertaining anomaly.

Even by Presley standards, the story is pretty thin. His character, Chadwick Gates, is discharged from the Army and returns to Hawaii where he wants nothing more than to soak up the sun, the hula and the cocktails. Naturally, there's a romantic element to complicate proceedings.

Buoyed by sheer virtue of his musical profile, Presley enjoyed another box office hit with Blue Hawaii. The movie was one of the biggest hits of its year, and appeared to cement Presley's invincibility as he straddled both the concert stage and the silver screen.

Viva Las Vegas is noted for its on-screen chemistry between The King and his co-star, Ann-Margret.

In fact, the qualities of the film itself threatened to be swamped when the tabloid press got wind of the affair that was occurring between the two leads. Eventually, Presley went on to marry Priscilla Beaulieu, but she reflected on the film's difficult production in her 1985 memoir. Colonel Tom Parker also started to exert his own influence, demanding to be credited as 'technical advisor', a development that anticipated his fanatical control over Presley's later career.

Irrespective of tabloid sleaze, Viva Las Vegas is an entertaining watch. Presley is typically charismatic as race car driver Lucky Johnson. who is in Vegas to score enough money to help secure his entrance into the Grand Prix. But when he meets Ann-Marget's swimming instructor Rusty, sparks begin to fly.

Are you ready to take a whirlwind, non-stop ride through the life of The King? Then click here to book your tickets for Elvis. The movie is released in Cineworld cinemas on 24 June.

Got some favourite Elvis Presley movies of your own? Share them with us @Cineworld.