Everything you need to know about Fantastic Beasts villain Grindelwald

J.K. Rowling's Fantastic Beasts sequel, The Crimes of Grindelwald, follows the adventures of magizoologist Newt Scamander (Eddie Redmayne) and a young Albus Dumbledore (Jude Law) as they face off against Grindelwald (Johnny Depp), the dark Wizard who caused oh so much damage in the 2016 blockbuster.

Grindelwald is a slippery character, having disguised himself as Colin Farrell's Percival Graves until that Scooby Doo moment at the end of the first film. He wants nothing more than to allow the wizards to stand on top of the muggles, so here's everything we know about him so far…

He's second only to Voldemort in terms of power

That's according to Rita Skeeter's (a fictional author within the wizarding world of Harry Potter) book, The Life and Lies of Albus Dumbledore. Skeeter's official line is that, in her list of the 'Most Dangerous Dark Wizards of All Time', Grindelwald is in second place, behind only Voldemort; he's so evil that most wizards daren't say his name. Grindelwald must be pretty bad. He also must have learned his villainous ways somewhere, right?

Grindelwald was expelled from the Durmstrang Institute for Magical Learning

Rather than becoming jilted by the corrupt ways and vicious magic of Slytherin House a la Voldemort, Grindelwald was instead a student of the Durmstrang Institute for Magical Learning, located in the Northern Scandinavia region.

Grindelwald was expelled from the historically rich school, however, at the age of 16 because of several vile experiments, which nearly killed several of his fellow students. While studying at the school, Grindelwald also began a lifelong fascination with the Deathly Hallows.

He has history with Dumbledore

J.K. Rowling first explored the relationship between Grindelwald and Dumbledore in her seventh and final Harry Potter book, The Deathly Hallows, released as a two-part movie in 2010 and 2011.

During Part 1, we see a young Grindelwald (Jamie Campbell Bower) as part of a flashback. We discover that he and Dumbledore indeed knew each other, having met after Grindelwald was expelled and went to live with his auntie in Godric's Hollow. Both he and Dumbledore worked together to find all three parts of the Deathly Hallows, but their intentions were wildly different.

Grindelwald and Dumbledore longed for a new world order in which the witches and wizards represented the ruling class, but Grindelwald wanted to repress all those who stood beneath him. It is said that Dumbledore and Grindelwald were even a couple, something which will hopefully be explored in more detail in The Crimes of Grindelwald.

He killed Dumbledore's sister before rising to power

Before Dumbledore and Grindelwald could leave on their quest to find the three pieces of the Deathly Hallows, they locked horns with Dumbledore's brother, Aberforth. Tragically, during this battle, Dumbledore's sister, Ariana, was killed.

The blame was placed on Grindelwald, who then fled the country. After this, he began his plot to become all-powerful by himself. If Grindelwald and Dumbledore were indeed a couple, this would leave some bad blood between the pair, as well as an interesting history ripe for exploration in the Fantastic Beasts sequel.

He amassed an army of followers after stealing the Elder Wand

After taking the Elder Wand by force from legendary wand-maker Mykew Gregorovitch, Grindelwald became its new master. The all-powerful wand awarded him with a whole host of followers, and after amassing his army, Grindelwald took to Europe and fought in a number of tirades.

Mass-slaughter of wizards, witches and muggles alike took place, and Grindelwald became the nasty villain we know of today. War was initiated, and thus a wizardhunt (see: manhunt, but for wizards) took place. He then took on the identity of Percival Graves, successfully infiltrating the Magical Congress of the United States of America (MACUSA).

This brings us up to date with the events of Fantastic Beasts and Where to Find Them, the conclusion of which saw Grindelwald captured and placed under arrest. The Crimes of Grindelwald takes place afterwards, and in Paris this time around, where Grindelwald has managed to escape. It's up to Newt Scamander and a young Dumbledore to save the day, and their deadliest battle begins.

Fantastic Beasts: The Crimes of Grindelwald is released on 16th November.

Toby Saunders is a writer who blogs for Cineworld as part of our news team. 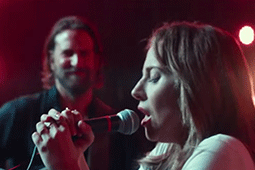 Unlimited members share their reactions to A Star is Born