We're all in need of cheering up at the moment, so we're looking towards Screen Junkies and their Emmy-winning content strand, Honest Trailers.

For those who don't know, Honest Trailers affectionately parody the biggest movie releases through the context of an apparently ordinary promo. Voiced by Jon Bailey, these rib-ticklers point out the flaws in our favourite films that we're all-too-keen to overlook, and culminate in a brilliant 'Starring' section that conjures nicknames for our favourite A-listers.

So, if laughs are thin on the ground at the moment, binge on our list of the 10 greatest.

OK, this one's not so affectionate, but it's very, very funny. The dead-eyed staring of stars Kristen Stewart and Robert Pattinson (aka Shovelface) comes in for flack, as it did on the previous Twilight Honest Trailers. And the team deserve props for pinpointing the sheer creepiness of Bella's CGI baby, who ages several years in a few months without anyone noticing, before it all culminates in a battle that's revealed to be a dream.

Best Part It has to be the portentous staring montage, a Twilight trope, and an Honest Trailer quirk that's been carried into other franchises (see the lens flares in Star Trek, or the actual stairs in Joker).

AKA the kidnapping series where no-one uses the word kidnapped, weirdly. Follow along with Liam Neeson's Irish-sounding American throat destroyer Brian Mills, who brings Europe to its knees as he seeks to avenge the family that has been  taken.

Best Part The starring role for 'Liam's Nissan' has us in bits every single time.

Remember when the Fast & Furious franchise had its wheels planted in the world of street racing? Yeah, not so much any more. Furious 7, directed by The Conjuring's James Wan, conjures increasingly outlandish scenarios in which cars defy the laws of physics. But nothing is so outlandish as the name Vin Diesel – given the circumstances, one might think that was made up. We can't wait for the inevitable Honest Trailer for next year's F9: The Fast Saga.

Best Part Pinpointing how the pursuit of Jason Statham's villain Deckard Shaw is pointless, as he always arrives where our heroes will be.

It's over to a fantastical iteration of London in Disney's 1964 classic, which introduces us to the "sing-song Slytherin" of the title, played by Julie Andrews. A full range of emotional acting is on display, from the frustrated British noises of David Tomlinson as Mr. Banks to the utterly inexplicable 'Cockney' accent of Dick Van Dyke.

Best Part The '14 Words Are Always Fun To Say No Matter What They Mean' song.

Here's one from the Honest Trailer vault, complete with '80s-authentic grainy video overlay and muffled sound. Watch in awe as Sly Stallone's Rocky punches the might of communist Russia in the face, and embarks on three separate training montages in one movie. We're still not sure about the presence of Paulie's robot, though...

Best Part Dolph Lundgren's Ivan Drago being credited as 'From Russia, With Glove'.

Here's another Honest Trailer classic that gets the eighties treatment – seriously, what is it with that VCR start-up sound effect that gets us so nostalgic? Witness Tom Cruise in his star-making role as cocky fighter pilot Maverick, and giggle as the filmmakers attempt to steer around his stature in a variety of ways. This more than gets us ready for the upcoming Top Gun: Maverick.

Best Part Identifying that Kenny Loggins' 'Danger Zone' is used three different times in the course of one movie.

It's brilliant when Honest Trailers do musicals, as they spin their own hilarious parodies of chart-topping hits. Blockbuster smash The Greatest Showman soared to success off the back of its crowd-pleasing melodies, choreography and Hugh Jackman's charismatic central performance. But Honest Trailers aren't about to let the filmmakers off scott-free – particularly given the notoriety of the real-life P.T. Barnum.

Best Part The 'These Two People Didn't Even Exist' duet between Zac Efron and Zendaya.

John Carpenter's 1978 slasher masterpiece is both celebrated and skewered in typical Honest Trailer fashion. Watch as they pinpoint the horror film cliches that were either "invented or cemented", including implacable serial killer Michael Myers. They also make some other good points, including the mystery POV shot behind Michael as he drives around Haddonfield, Illinois.

Best Part Myers' ability to 'Batman' himself into thin air while selecting his targets – accompanied by Scooby Doo noises.

Jon Bailey's voice takes on an especially joyous register as he examines the legacy of Disney's world-shattering imagination. Well, that's what the magic of Frozen does to a person. Watch as "adorkable" sister Anna (Kristen Bell) teams up with her sister Elsa (Idina Menzel), hot guy Kristoff (Jonathan Groff) and snowman Olaf (Josh Gad) to... well, battle her sister, a hot guy and a snowman.

As correctly pointed out by the Honest Trailer team, it took four directors and two Dumbledores to complete the big-screen Harry Potter saga. J.K. Rowling's book series became one of the biggest movie franchises of all time, and, with the voiceover given a suitably whimsical twist, we canter through all of them. This ranges from 'The One Where They're Struggling To Act' to 'The One With The Raging Hormones' and beyond.

Best Part Wishing that there had been just a tad more movement in the climactic battle between Harry and Voldemort. 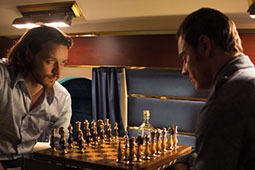 The 14 greatest time travel movies ever made