Home Cineworld Blog In the Heights: your guide to the characters in the new trailer

In the Heights: your guide to the characters in the new trailer

A new trailer has dropped, or, rather, boogied its way online, for Lin-Manuel Miranda's In the Heights. Miranda's smash-hit Broadway production preceded his seminal Hamilton, bringing audiences the story of an idealistic Manhattan bodega owner and his aspirations for a brighter future.

The original show, co-written with playwright Quiara Alegría Hudes, garnered huge success both on and off-Broadway, before later enjoying an international tour including a stint in London's West End. It was nominated for thirteen Tony Awards (the Broadway equivalent of the Oscars). It won four, including the 2008 prize for Best Musical – and now it's on its way to the big screen in time for the summer. Here's the latest trailer.

Crazy Rich Asians helmer Jon M. Chu is responsible for marshalling the bright-eyed cast and exuberant dance numbers, exactly what we need to blow away the cobwebs. If you're not familiar with In the Heights, here's our guide to the main characters as featured in the new trailer.

Our hero is an eager young bodega owner in the Washington Heights area of Manhattan. Usnavi is acutely aware of the cultural changes steadily being wrought on his neighbourhood, and is keen to remain steadfastly loyal to his roots, even as he seeks out what exists beyond the concrete canyon. He aims to open a bar in his home country of the Dominican Republic. In the movie, he's played by Hamilton fixture Anthony Ramos (Lin-Manuel Miranda originally played the character on-stage).

Beauty salon worker Vanessa is Usnavi's girlfriend. Actor and singer Melissa Barrera came up through the Mexican music scene, including her 2013 debut 'Melissa y Sebastian' which led to her first album. Barrera later broke into TV with the Starz series Vida in 2018, before getting the call for In the Heights.

Carla is one of the owners of the salon at which Vanessa works. Pink News reports that the film will develop the relationship between Carla and fellow salon owner Daniela. Brooklyn 99's Stephanie Beatriz is playing the role, taking over from original Off-Broadway/Broadway incumbent Janet Dacal.

Escape is a key theme of In the Heights, and the bookish Nina appears to have it made. At the beginning of the story, she's scored a place at Stanford University, but she soon returns to her local barrio (neighbourhood) ashamed to admit that she's lacking a sense of direction. She then begins a relationship with Benny. In the film. Nina is portrayed by singer-songwriter Leslie Grace whose zesty, bilingual songs traverse English and Spanish.

Benny is the only non-Spanish-speaking character in the story. He works for Nina's strict father Kevin and falls head over heels for her. Straight Outta Compton actor Corey Hawkins takes on the role for the movie.

Usnavi's 'abuela' (grandmother) remains a cornerstone of his life. The wise and affectionate Claudia is played by Olga Merediz who reprises her Tony-nominated role from the Broadway production.

There's also a supporting role for the man who started it all. Miranda plays Mr. Piragüero whose much-loved piragua (Puerton Rican ice cone) keeps the barrio cool on hot days.

In the Heights is due for release on 25th June 2021 (all being well). Planning to salsa along to this stage smash on the big screen? Let us know @Cineworld. 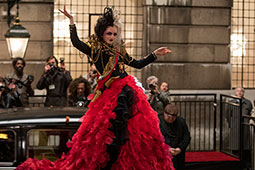