Michael Keaton in talks to return as Batman

It's been 28 years since Michael Keaton last donned the cap and cowl as Batman in Batman Returns. However, Deadline indicates that Keaton is in talks to return as the Caped Crusader in DC's forthcoming The Flash.

Directed by IT's Andy Muschietti, The Flash will be the solo movie debut of Ezra Miller's Barry Allen. He last appeared in 2017's much-maligned Justice League, where he impressed Ben Affleck's Bruce Wayne/Batman with his lightning-fast abilities.

Rumour has it that Batman will mentor the talented Barry, in the manner of Samuel L. Jackson's Nick Fury from the Marvel Cinematic Universe (MCU). The Hollywood Reporter states that there is no crossover between The Flash and the forthcoming The Batman, directed by Matt Reeves and starring Robert Pattinson. Nevertheless, it will be a jolt of nostalgic joy if Keaton were to be incorporated into the DC Extended Universe (DCEU).

Keaton first took on the role in 1989's Batman, directed by Tim Burton. He had to fend off vicious criticism – Keaton was best known at that point for wacky comedies like Beetlejuice, also directed by Burton. However, the film skyrocketed to blockbuster success and cemented a popular image of brooding Gothic grandeur. Keaton reprised his role in the far more twisted Batman Returns, but jumped ship with Burton when their visions clashed with that of Warner Bros for Batman Forever. That movie was eventually directed by Joel Schumacher with Val Kilmer in the title role.

The Flash is due for release on 2nd June 2022. Excited about the possibility of Michael Keaton returning as Batman? Let us know @Cineworld and be reminded of his iconic status in the following clip. 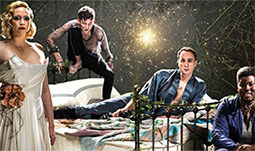