Spider-Man: No Way Home is poised to bring the multiverse into the Marvel Cinematic Universe (MCU). Tom Holland's Peter Parker/Spider-Man, in collaboration with Doctor Strange (Benedict Cumberbatch), inverts the boundaries of time and space to reverse the consequences of his identity being leaked. However, the spell goes wrong, unleashing various non-MCU villains on the world including Doctor Octopus (Alfred Molina) and Green Goblin (Willem Dafoe).

No Way Home is not only set to be a nostalgia rush for OG Spider-Man fans; it also anticipates exciting new developments within the MCU itself. The possibilities of the multiverse are vast as we progress through Marvel Phase Four, namely in the upcoming Doctor Strange in the Multiverse of Madness, helmed by Sam Raimi.

In the words of Marvel.com: "Within the Marvel Universe, there are countless timelines and worlds that have only scraped the surface of the larger multiverse. Many of Marvel’s most popular event series have spawned worlds their own, and their adventures continue even after the stories conclude." So, here are five multiverse storylines that we'd love to see dramatised on the big screen.

The aforementioned Doctor Strange in the Multiverse of Madness is rumoured to be the first horror-inflected movie in the MCU. Well, that's what we'd expect from helmer Sam Raimi who caused an enormous stir with his horrific, yet morbidly funny, Evil Dead trilogy, not to mention the likes of Drag Me To Hell. But what about an actual Marvel zombie movie? It's not necessarily a pipe-dream: the Marvel Zombies storyline saw all of humanity collapse and become flesh-eating ghouls, including Earth's superheroes. As per the original comic book lore, these flesh-eating fiends even ate Galactus and continued to spread to other realities.

Would a future MCU movie be willing to open the taps on the levels of gore and terror? Who would direct the film? Maybe somebody like Jordan Peele (Get Out; Us) could bring his scary yet slyly humorous touch to the Marvel franchise – after all, it's not like the MCU hasn't already imported indie directors into the fold (Taika Waititi; Ryan Coogler et al).

Hugh Jackman has officially stepped down as Logan/Wolverine, but there are plans to bring the X-Men into the MCU fold. This was previously impossible owing to the fact that the X-Men were owned by 20th Century Fox; given that Fox has now been absorbed into Disney, there are potentially many dramatic opportunities to expand the X-Men mythology.

The Old Man Logan storyline already influenced Jackman's superb and violent 2017 swan song Logan, but we'd love to see a straight-up adaptation. Set in an alternate timeline, it depicts a jaded, weary and aged Logan who has been tricked into killing all of his fellow X-Men prior to his retirement. Were he a few years younger, we'd imagine that Clint Eastwood would be perfect for the role of the older Wolverine. That said, there are surely plenty of other casting possibilities out there, and this could give the X-Men franchise the kick in the pants it needs as it falls under the auspices of the MCU.

The extraordinary abilities of Wanda Maximoff/Scarlet Witch (Elizabeth Olsen) have already fuelled the acclaimed series WandaVision. We know that the character is returning to the big screen in Doctor Strange in the Multiverse of Madness, so we can't help but wonder if the MCU has even grander plans in store for her. The House of M storyline may provide an answer. In the comics, Wanda created EARTH-58163 (aka the House of M), an alternate world where mutants are the dominant life force. The storyline is one that's resonant with a sense of pathos and tragedy (tonally, this would very much connect to WandaVision), and a movie adaptation would really push Olsen to the forefront.

The Spider-Gwen (aka Spider-Woman) character has already appeared in the non-MCU-affiliated animation Spider-Man: Into the Spider-Verse, as voiced by Hailee Steinfeld. (The character returns in 2022's Spider-Man: Into the Spider-Verse 2.) However, what about a live-action MCU incarnation of the character? It might be a chance for a talented rising star to join the Marvel ranks – maybe someone like Rachel Zegler, who is generating acclaim for her performance in West Side Story and has recently been cast as Disney's new Snow White. A Spider-Gwen movie would be a refreshing counter-balance to the Peter Parker-oriented live-action movies that have cropped up periodically since 2002's Spider-Man.

In the alternate world known as EARTH-982, the daughter of Peter Parker and Mary Jane Watson didn't meet the tragic fate that befell her on EARTH-616 (aka the 'prime universe', or simply the Marvel Universe as we traditionally know it). Instead, Mayday Parker grew up to embrace her destiny as The Amazing Spider-Girl. Just imagine the emotional possibilities if Mayday's own movie multiverse crossed over with that of her father, Spider-Man (in this hypothetical scenario, we're assuming Peter might have to be played by a much older actor). It might end up being the most emotionally powerful instalment in the MCU thus far.

Click here to book your tickets for Spider-Man: No Way Home, which opens in Cineworld cinemas on 15th December. Which are the multiverse storylines you'd like to see in the MCU? Let us know @Cineworld. 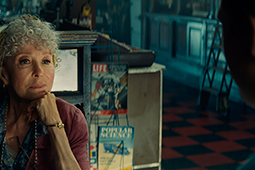