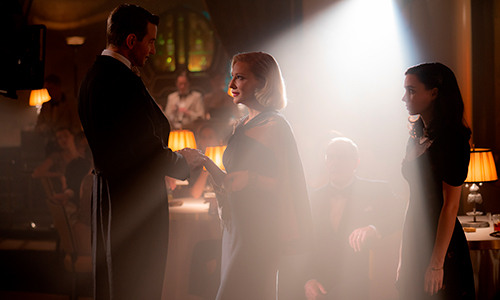 The Shape of Water director Guillermo del Toro returns with Nightmare Alley. A remake of the 1940s Tyrone Power movie, Nightmare Alley assembles a stunning cast for a noirish story of deception and sensuality, topped by A Star Is Born's Bradley Cooper.

He plays Stanton Carlisle, a fairground 'barker' (promoter) with a talent for conning people. When Stan teams up with the seductive and deadly psychologist Dr. Lillith Ritter (Cinderella's Cate Blanchett), he's pulled into a dark, murky world of secrets.

As if the presence of Del Toro, Cooper and Blanchett weren't enough, we should also factor in the presence of A Ghost Story's Rooney Mara, The Lighthouse's Willem Dafoe, Hereditary's Toni Collette and The Cabin in the Woods' Richard Jenkins. Nomadland's David Straithairn and Hellboy's Ron Perlman, a Del Toro favourite, also star.

It's a fabulous ensemble that promises to put a human face on Del Toro's latest carnival of the grotesque. The director's penchant for offbeat characterisation, Gothic atmosphere and sudden violence has been evident in both his Spanish and English-language work, including the Oscar-winning masterpiece Pan's Labyrinth.

Check out the trailer below and get ready for Nightmare Alley's arrival on 21st January 2022.