Daniel Craig's 007 isn't the only secret agent in the field in 25th James Bond movie No Time To Die. He's also forced to co-operate with Lashana Lynch's Nomi, the new '00' agent on the scene, as well as the glamorous Paloma, played by Ana de Armas.

The latter character takes centre stage in this new TV spot, chiding Bond for his lateness – well, he does have a licence to kill, not to keep time. This is a reunion of sorts: both actors starred in Rian Johnson's terrific whodunit Knives Out, although this time de Armas looks like both the physical and mental equal of Craig.

There's also a quick glimpse of some new action sequences, including Bond taking the controls of a light aircraft, a forest-based shootout and more footage from the Aston Martin DB5 chase shot in Matera, Italy. There's also a close-up of a returning Ralph Fiennes as M, who appears to be looking for Bond in a bid to draw him back into active duty. Plus, Linus Sandgren's cinematography looks appropriately stunning – let's not forget this is the man that shot Oscar-winning musical La La Land.

No Time To Die begins with 007 retired and living off the grid in Jamaica (the country where author Ian Fleming gave birth to the James Bond character). However, he's soon lured into the search for a missing scientist by old CIA colleague Felix Leiter (Jeffrey Wright), which puts Bond in the sights of deadly new enemy Safin (Rami Malek). Even worse, Safin seems to have a connection with Bond's new wife Madeleine Swann (Lea Seydoux).

Directed by Cary Joji Fukunaga and co-written by Phoebe Waller-Bridge, No Time To Die also showcases the talents of performer Billie Eilish on the title track. Co-starring Christoph Waltz, Ben Whishaw and Naomie Harris, No Time To Die hits us on the 12th of November. 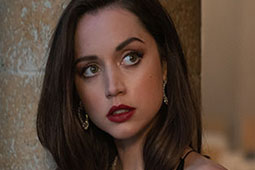 Ana de Armas: the meteoric rise of the No Time To Die star