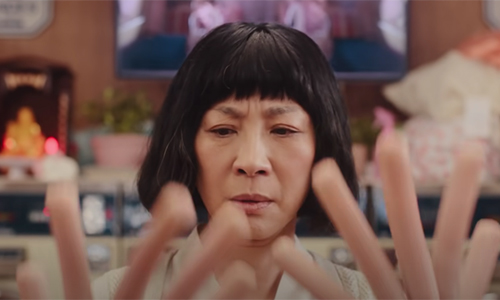 The big night gets underway on March 12, 2023, and over the coming months, we're presenting our predictions for the key categories, including Best Picture and Best Director.

This week: our five hot tips for the category of Best Actress. Scroll down and see if you agree with our choices.

1. Viola Davis for The Woman King

Can Viola Davis make it a twofer at the Oscars? She claimed her first Academy Award for 2016's powerful Fences, tapping into the melancholic spirit of an oppressed 1950s housewife and mother. In this week's new release The Woman King, Davis goes to the opposite end of the spectrum and lets it all out to spectacular effect.

Davis plays General Nanisca, leader of the Agojie, the warrior protectors of the West African Kingdom of Dahomey. The movie wears its feminist credentials on its sleeve in its proud and ferocious depiction of the all-female band of warriors, a collective that existed in real life.

The Woman King interrogates the complex nuances of Dahomey, including its complicity in the TransAtlantic slave trade. However, it's all anchored by Davis' bellowing yet bruised turn as a fierce fighter who is harbouring inner anguish, feelings that later spill out in her interactions with new Agojie initiate Nawi (the impressive Thuso Mbedu).

Click here to book your tickets for The Woman King, out now at Cineworld.

When Cate Blanchett's latest performance is described by many critics as a career-best, one sits up and takes notice. After all, the star of Elizabeth, The Aviator, I'm Not There and Blue Jasmine isn't exactly lacking for transformative, engrossing portrayals of characters in the midst of a grand crisis.

Blanchett is said to be electrifying as Lydia Tár, the fiercely dedicated conductor of a world-renowned German Philharmonic orchestra. In wielding the conductor's baton, Lydia becomes punchdrunk on her almost god-like role as a woman who can manipulate time, every beat and semi-tone hinging on her poise and command.

Todd Field's kaleidoscopic drama (the director's first film in nearly 20 years) spans Lydia's spectacular ascent and tragic, self-inflicted descent as she becomes a victim of her own success and hubris. Word out of the Venice and Toronto film festivals indicates that Blanchett, accomplished performer that she is, never grovels for our sympathy but conjures a multifaceted portrayal of a successful career woman whose intermingling of public and private ultimately becomes her undoing.

Blanchett has already won two Oscars, for the aforementioned The Aviator and Blue Jasmine. She's currently fielding good odds to win her third Academy Award, which would place her alongside the likes of Meryl Streep.

3. Emma Thompson for Good Luck to You, Leo Grande

Back in the summer, this delightful dramedy provided a counterweight to the usual blockbuster fare. Directed by Sophie Hyde and conceived by Katy Brand, Good Luck To You, Leo Grande is a profoundly intimate movie that results almost entirely on its two central performers.

One of said performers is Emma Thompson, who is surely in the running for the 2023 Oscars. (Given Leo Grande's release timing, she missed out on the 2022 season but may well qualify for 2023, if the Oscar voters' memories can stretch that far, which isn't always guaranteed.)

Thompson plays a repressed, retired former R.E. teacher who solicits a young male sex worker to put her in touch with the sex life she's sorely missed all her life. We know that Thompson is a dab hand at throwing away verbal zingers, and indeed she plays her character Nancy's awkwardness for huge, relatable laughs.

However, Thompson's other skill is diving beneath the skin of brittle characters to expose their fallibilities. As Nancy unfolds across the course of her bedroom sessions with the titular Leo Grande (Daryl McCormack), she gives away more of herself than she likely imagined.

Thompson's portrayal is a mixture of many things: pitiable, sympathetic and judgmental, but above all, it's completely believable. Will it be bold enough for the attention of the Academy?

4. Michelle Williams for The Fabelmans

Director Steven Spielberg offers us a candid and intensely personal look inside his own memory bank in The Fabelmans. The revered director, whose range has run the gamut from Jaws to Schindler's List and beyond, dramatises the spark of cinematic inspiration that set in at an early age.

The Fabelmans spans several years in the life of Spielberg's fictional avatar, Sammy Fabelman, played as a child by Mateo Zoryon and as a teenager by Gabriel LaBelle.

Living an apparently ordinary existence in post-World War II Arizona, Sammy is besotted with making 8MM films for his family to enjoy. Later on, a cinema visit to watch Cecil B. DeMille's circus epic The Greatest Show on Earth opens Sammy's eyes to the wonder of the big-screen experience.

Spielberg's take on his own childhood is equal parts pragmatic and fantastical, relying on diffused lighting and magical exposure from his regular cinematographer Janusz Kaminski.

The heart of the movie is said to lie with the double-act of Michelle Williams and Paul Dano, who play Sammy's loving, if conflicted, parents. The former wholeheartedly supports Sammy's desire to become a filmmaker whereas his father later derides it as a hobby.

As the aforementioned Mitzi Fabelman, the ever-excellent Williams embodies the spirit of the story. In contrast to her on-screen husband, Burt (the equally brilliant Paul Dano), Mitzi encourages her fledgling filmmaker son to follow his dream, even when it encourages dissent within the family.

Williams has long been commended as a powerhouse performer, and although she's been Oscar-nominated four times already, she's never claimed a statuette. Given Spielberg's sheer lasting clout within the industry, Williams is surely in with a shot of winning.

5. Michelle Yeoh for Everything Everywhere All at Once

It takes an actor of rare skill and repute to ground a crazy movie that spans multiple multiverses. However, the veteran Michelle Yeoh is that person: not only a noted martial arts star with a career venturing back decades, she's also increasingly impressive in the realm of dramatic acting.

Everything Everywhere All at Once continues to mine Yeoh's ability for nuance, as already demonstrated in the likes of Crazy Rich Asians. She plays a mother and laundromat owner whose frustrations with day-to-day life, her marriage and her apparently isolated daughter find their emotional release in an astonishing, cosmic-spanning journey across time and space, one that is seemingly meant to unlock her character Evelyn's inner turmoil.

Filmmakers the Daniels throw everything and the kitchen sink at the film's visual aesthetic but Yeoh keeps it grounded. Ultimately, she's able to bring everything back down to Earth for a powerful sense of climactic resolution with her daughter Joy (Stephanie Hsu), who otherwise manifests as the demonic entity Jobu Tupaki, and her husband Waymond (Ke Huy Quan whose long-awaited big-screen return is an absolute treat).

Much recognised by awards ceremonies in Asia, Yeoh has yet to be nominated by the Oscars. Given the laudatory reviews she's received for Everything Everywhere All at Once, we think it's increasingly likely this year.

Which of these movies are you tipping for Oscar success? Don't forget that with a Cineworld Unlimited membership, you can enjoy all these movies, and a lot more exciting benefits, from just £9.99 a month.