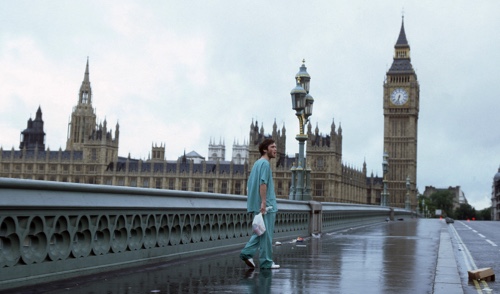 On the surface, Men – Alex Garland’s latest output as writer-director – is a departure from his earlier sci-fi-inflected films. But his stories are rarely quite what they seem on the surface. So it is with Men, a folk horror with clear gender issues at its heart.

The casting of one actor, Rory Kinnear, to play almost all male parts might seem a dramatic contrivance. Yet it’s a crucial piece of the psychological puzzle in which the events on screen merely hint at the iceberg of emotions and themes lurking beneath.

Garland’s breakthrough novel, The Beach – published in 1996 and filmed by Trainspotting director Danny Boyle in 2000, with Leonard DiCaprio starring – laced the backpacker fantasy of a hidden tropical paradise with a slowly rising sense of dread. Similarly, in Garland’s screenwriting and directorial efforts to date, he uses his unique visual flair and storytelling style to subvert expectations and genres.

To whet your appetite in the run-up to the release of Men, in Cineworld from 1st of June, we explore the earlier movies of this distinctively British talent.

Having endured the Covid pandemic, we may think we have a fair idea of what a country ravaged by a deadly virus looks like. But the Britain depicted in Garland’s first outing as screenwriter, again helmed by Danny Boyle, is closer to Lord of the Flies with zombies.

Waking from a coma, Jim (Cillian Murphy at his most sympathetic) emerges from hospital to find London’s streets deserted. He soon learns that a ‘Rage’ virus provoking frenzied aggression has been accidentally unleashed, wreaking havoc across Britain.

Jim teams up with fellow survivors Selena (Naomie Harris), Frank (Brendan Gleeson) and Hannah (Megan Burns) to seek sanctuary near Manchester. What they learn about the troops manning the promising oasis goes some way to addressing the question at the heart of Garland’s story: how does such a virus transform those not infected?

As in subsequent films, he’s less interested in the action, focusing more on the impact on his characters. And though there’s plenty of gore, and Garland’s unusually speedy undead are terrifying, it’s his outlook on ‘civilised’ society under pressure that really chills. With its almost docu-realist feel cranking up the tension, this is compulsive horror viewing.

The space-opera set-up – a ship carrying a huge bomb must journey to the heart of the solar system on a perilous mission to reignite the atrophying sun – could have been just another Armageddon-style B-movie. Instead, written by Garland – reunited with Boyle and Murphy – Sunshine as meditative as it is thrilling.

Yes, there are explosions, spectacular visual effects and a villain, of a kind – disfigured starship captain Pinbacker, played with typically sinister intensity by Mark Strong. The claustrophobia of a long voyage through distant space echoes elements of Alien. So does the disparate international crew including Chris Evans (Captain America), Rose Byrne (Bad Neighbours), Michelle Yeoh (currently wowing audiences in Everything Everywhere All at Once), Kiwi Cliff Curtis (Whale Rider) and Hiroyuki Sanada (The Last Samurai).

But Garland subverts the sci-fi disaster genre to explore themes of religion, physics and even climate change.

The so-called Turing test devised by the eponymous British computer scientist famously examines whether an artificial intelligence can converse in a way indistinguishable from a human.

In Garland’s first feature as writer-director, programmer Caleb Smith (Domhnall Gleeson) is challenged by reclusive tech CEO Nathan Bateman (Oscar Isaac) to apply the Turing test to high-spec android Ava (Alicia Vikander). But as Caleb develops an unexpected affinity with Ava, it begins to seem that her thought processes – and ability to manipulate – may be all too human.

In form a sci-fi thriller, Ex Machina uses sparse styling, beautifully subtle visual effects and mesmerising performances – particularly from the balletic, understated Vikander – to question ideas of consciousness, morality and the perils of pushing the limits of AI.

Though more visually sumptuous than its predecessor, with a strong tinge of psychedelia and some pulse-racing action, this immersive sci-fi provokes thought rather than just adrenalin.

Garland directs as well as adapting the screenplay from a novel by Jeff VanderMeer. A team of female scientists, among them biologist Lena (Natalie Portman), is sent on a mission into a mysterious zone dubbed ‘The Shimmer’. This strange miasma enveloped a wide swathe of countryside after a meteorite hit the US three years earlier. Perceptions of reality, time and memory become warped as the women approach The Shimmer’s epicentre.

Battling mutant predators, the women also contend with paranoia, delusions and very real senses of regret and guilt. Though the basic premise seems like a common sci-fi trope – alien life threatens Earth after plummeting from space – this is a film that offers extraordinary spectacles and human drama, but never simple answers.

Click here to book your tickets for Men, opening in Cineworld cinemas from the 1st of June.