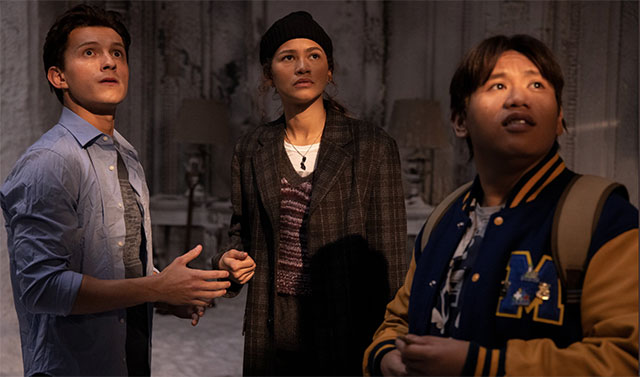 It's official. The title of Tom Holland's third Spider-Man movie is Spider-Man: No Way Home. While we await another soaring, sweeping adventure for Peter Parker, we can't help but wonder – what does the title of the movie actually mean?

There's a consistent thread (no pun intended), in that it follows 2017's Homecoming and 2019's Far From Home. Even so, we reckon the seemingly innocuous title of the new wall-crawling adventure teases something truly special...

1. It points towards Peter's expulsion from New York

At the end of Far From Home, Peter's identity was maliciously leaked to the wider world. This was the final act of vengeance from reality-altering villain Quentin Beck/Mysterio (Jake Gyllenhaal), who implicated Peter in his own death and made the leak via New York newspaper The Daily Bugle. More specifically, frothing editor J. Jonah Jameson (J.K. Simmons) made the announcement, with no small amount of relish.

A jaw-dropping cliff-hanger, it suggested a dilemma that Spider-Man wouldn't be able to swing his way out of. In the trailer for the upcoming Jared Leto superhero movie Morbius, we can see Spider-Man's image emblazoned with the word 'murderer'. Clearly, the scars are running deep in Manhattan as the city's inhabitants presumably feel a sense of betrayal on the part of their friendly neighbourhood Spider-Man.

It's highly likely that, at the onset of No Way Home, Peter will be ostracised, expelled from his beloved home city and perhaps living an underground existence elsewhere in America. Who knows, he may have returned to Europe to stay safe.

2. It suggests that Peter gets lost in the multiverse

This is, perhaps, the most likely reason for the film's title. We already know that Doctor Octopus (Alfred Molina) and Electro (Jamie Foxx) are featuring in No Way Home. These two villains originated outside the realm of the Marvel Cinematic Universe (MCU), in 2004's Spider-Man 2 and 2012's The Amazing Spider-Man 2 respectively. This suggests that various franchise threads are being tied together in the new Spidey movie via the presence of the multiverse.

In 2018, the Oscar-winning animated movie Spider-Man: Into the Spider-Verse demonstrated the possibilities of multiverse storytelling. Centrally anchored around new Spider-Man suit incumbent Miles Morales (Shameik Moore), the film also imported a delightful range of goofy Spider-characters, suggesting that there's always more than one person to take up the mantle.

Animation is one thing, but we've never seen this approach done in live-action before. It's highly likely that the time-space continuum will be messed up during the events of No Way Home, which one can possibly attribute to the presence of Doctor Strange (Benedict Cumberbatch). As villains are potentially imported from other realms, our money is own Peter becoming lost in one of these alternate dimensions, prompting a desperate need to return home where everything makes sense.

3. It carries a deeper meaning about Peter's duties as an Avenger

Maybe the title isn't as literal-minded as we've made out? Perhaps it has more of an emotional resonance: Peter can no longer stay anchored to his beloved Manhattan, but must embrace his destiny as an Avenger and leave the concrete canyons of the city far behind. In order to advance, he must carry on the legacy of his late mentor Tony Stark (Robert Downey Jr.), and make the difficult break with all that he knows and loves. After all, sacrifice is a key part of what makes a hero – Tony sacrificed his home in Iron Man 3 (2013) and, ultimately, his life in Avengers: Endgame (2019).

Ought we to prepare the tissues for this new Spidey movie? Rumour has it that it's Tom Holland's final solo movie in the MCU, so perhaps there will be a split with New York during the climax, propelling him onwards towards new Avengers adventures in Marvel Phase Five?

Spider-Man: No Way Home is set for release (at the time of writing) on 17th December 2021. What do you think the title means? Let us know @Cineworld.