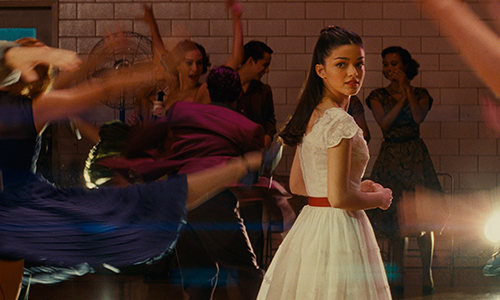 Steven Spielberg remains Hollywood's prime purveyor of popcorn entertainment, a position he has held for more than four decades. In a career that has encompassed multiple Oscar wins, Spielberg has traversed every conceivable genre, from popcorn adventure (Raiders of the Lost Ark) to sci-fi (E.T.; Jurassic Park), Holocaust drama (Schindler's List) to paranoid Cold War thriller (Bridge of Spies).

It is, perhaps, surprising to note that Spielberg has never ventured into the realm of the feature-length musical – that is, until now. We're on the eve of the release of West Side Story, Spielberg's remake of the classic Leonard Bernstein/Stephen Sondheim production, which puts a dazzling lick of paint on the finger-snapping song-and-dance epic. Ansel Elgort and Rachel Zegler step in as our new Tony and Maria in a movie that enlists all manner of top-line musical talent, from arranger David Newman to conductor Gustavo Dudamel. Evergreen numbers such as 'Tonight' and 'Somewhere' (performed by the Oscar-winning star of the original film, Rita Moreno) shimmer and sheen in their new arrangements.

Spielberg's take on West Side Story injects more gutsiness and urgency into the underlying racial tensions between rival New York gangs the Sharks and the Jets, aided by authentically diverse casting. But as before, the movie is primarily a star-crossed romantic story that is designed to leave people swooning – and more than a little misty-eyed. However, is it accurate to say that this is Spielberg's first-ever dabble with the world of the musical? People making such bold claims need to play it cool.

Although Spielberg (himself a clarinetist when he was in high school) has never made a full-blown musical before, the genre has loomed throughout the background of his career. Released in 1979, World War II satire 1941 began life as a musical, before being reconceived as a wacky, all-star spoof. The film was a rare misfire for Spielberg, and even he admits that he ought to have kept the project in its original form. Although not a box office failure, 1941's critical drubbing led Spielberg to downshift into the lower-budget, popcorn B-movie thrills of Raiders of the Lost Ark (1981), which, ironically enough, emerged as one of the director's greatest achievements.

Likewise, 1991's ill-conceived Peter Pan update Hook was initially mapped out as a musical. Spielberg's longtime collaborator John Williams began work on musical sketches several years in advance of the production, but the musical element was eventually scrapped. Given that he now had a plethora of themes with which to work, Williams reconfigured the melodies into one of his richest scores, mixing Korngold-esque trumpet fanfares with the soaring strings of the Pan theme.

In-between the release of Raiders and Hook, Spielberg succeeded in translating his love of musicals onto the screen, albeit briefly. Released in 1984, Indiana Jones and the Temple of Doom begins somewhat unusually with a performance of Cole Porter's 'Anything Goes', originally written for the 1934 film of the same name. It's an ironically jubilant and upbeat intro for the darkest and grisliest Indiana Jones movie of them all, and truthfully, the performance doesn't connect to the rest of the narrative, aside from introducing nightclub singer Willie Scott (Spielberg's eventual wife Kate Capshaw, who performs the song in Mandarin).

Nevertheless, there's an infectious sense of can-do spirit from both the staging and the orchestration (again, courtesy of the peerless John Williams). Anthony Powell's costume designs, Douglas Slocombe's cinematography and Elliot Scott's production design all fuse together for an entertaining three-minute salute to the Golden Age of the movie musical, specifically the work of the great Busby Berkeley (1933's Footlight Parade et al).

One senses a young director who is eagerly refracting his multifaceted genre obsessions, narrative consistency and continuity be damned. Spielberg's puppyish eagerness has, perhaps, been tempered with age, his later movies certainly leaning more towards the contemplative (2005's Munich; 2012's Lincoln et al).

Therefore, somewhat bizarrely, the second Indiana Jones movie, a film on which Spielberg himself is ambivalent, helped pave the way for the director's bold new iteration of West Side Story. But then again, few mainstream filmmakers recognise the power of soundtrack music in the way that Spielberg does. He indulges (some would say over-indulges) musical storytelling in order to enhance our understanding of the visual narrative, working with the likes of John Williams to coax out the implicit themes of a given storyline.

Take the aforementioned E.T., for instance. The last 15 minutes of Spielberg's wrenching sci-fi drama are essentially operatic in nature, given that there's relatively little dialogue (apart from E.T.'s valedictory "I'll be right here"), which allows John Williams' majestically moving score to power the action to its cathartic climax. The composer's final movement in the film, titled 'Adventures on Earth', traverses everything from the climactic bike chase to the tear-jerking farewell between E.T. and his newfound friend Elliot (Henry Thomas). The final, timpani-laden salute as E.T.'s spaceship streaks a rainbow across the sky may well be the greatest thing Williams has ever composed – and one must credit Spielberg for encouraging the composer to act as the inner-dialogue of the characters, primarily Elliot.

Williams actually struggled with the synchronisation of the sound, discovering that he couldn't land the relevant musical beats with the on-screen editing. In a gracious and generous move, Spielberg then told Williams to compose the sequence as he wished, and he would then edit the film around the music. Little wonder that the climax of E.T. demonstrates one of the best marriages between moving image and music in film history.

This signals another implicit connection with West Side Story. As mentioned, E.T. is effectively operatic in the way that it uses Williams' music, and West Side Story was itself pitched at that elusive divide between opera and musical theatre. The original 1957 Broadway production gained recognition for fusing the outsized emotion of the former with the commercial, audience-pleasing qualities of the latter, emerging as a landmark production that then paved the way for the Oscar-winning 1961 movie. Given his dramatic impulses, it seems that Spielberg has always been destined to bring West Side Story to the screen; it was a question of when, not if.

Similarly operatic in scope is Close Encounters of the Third Kind (released in 1977). For the most part, Spielberg's sci-fi odyssey, which focuses on Richard Dreyfuys' everyman pursuit of extraterrestrial life, is pensive, moody and often downright threatening. Only when Dreyfus and co-star Melinda Dillon breach the summit of Wyoming's Devil's Tower monument does the scope of the movie enlarge, both visually and aurally.

The dialogue is largely ditched as John Williams' score, hitherto dark and scary, crosses the diegesis and is performed within the context of the scene. Said context is a musical dialogue between the human scientists and the alien mothership, as the notes of Pinocchio's 'When You Wish Upon a Star' are used to break down light-years of interstellar communication. The initially hesitant deconstruction of the theme (a tuba is used as the mothership's response) eventually becomes more cohesive and fluent, even ecstatic, before Williams' score steps back into the more traditional non-diegetic (outside the world of the film) role during the soaringly beautiful orchestral finale.

Truthfully, it is hard to sum up the magnitude of the musical achievements within Spielberg's movies, particularly when discussing the collaboration between the director and John Williams. Their partnership is one of the most enduring and fruitful in Hollywood history, although Spielberg's tendency to favour music has been frequently criticised for mawkishly leading an audience's emotions. Even so, it's hard to argue with the effectiveness of Jaws, which is essentially a Stravinsky-esque horror symphony that becomes the relentless pulse of the ruthless man-eating shark. Williams' Oscar-winning music stepped in to become an active presence in the film when the collective of prop sharks failed to work on the set.

As Spielberg has traversed various dramatic idioms, so, too, has Williams had to adapt. He absorbed Jewish folk melodies via the power of Itzhak Perlman's solo violin for the Oscar-winning Schindler's List, a minor key powerhouse that many consider as the composer's crowning artistic achievement.

Interestingly, the origins of John Williams' career overlap with the release of the original West Side Story movie in 1961. He worked as a session pianist for composer Leonard Bernstein, helping to actualize Bernstein's melodies in between the quick-fire mixture of finger-snapping jazz, heart-melting string arrangements and fiery Puerto Rican mannerisms. At the same time, Williams had started to assert himself as a comedic jazz composer, a marked contrast with the bombastic, symphonic scores for which he eventually become famous. Decades later, Spielberg humoured this somewhat dormant side of Williams' musical personality via the likes of Catch Me If You Can (2002) and The Adventures of Tintin (2011).

Leonard Bernstein's music for the original Broadway production of West Side Story, and the subsequent film, was lauded for adopting various ethnic idioms and jazz metres. This was a turning point in the genre, marking a transition from the more typically symphonic Rogers & Hammerstein musicals towards something a bit more grounded, more rooted in the tactile, multifaceted sounds of bustling New York City. Interestingly enough, the Rogers & Hammerstein musicals often sought the involvement of revered composer and conductor Alfred Newman, writer of the 20th Century Fox fanfare, and father of the new West Side Story arranger David Newman. (He's also the father of composer Thomas Newman, with whom Spielberg worked on 2015's Bridge of Spies.)

To say that the new West Side Story soundtrack courses with a sense of legacy is an understatement. (John Williams has acted a musical consultant on the movie and provides the album's liner notes.) However, it takes a filmmaker like Spielberg to realise the magnitude of the project. Everything in Spielberg's career thus far has led him to this point, allowing West Side Story to act as an operatic summation of his love of film music.

Spielberg has never been afraid of singing from the rafters as far as a film score is concerned, and now he has found a logical outlet, a drama in which the music is the story. For once, Spielberg cannot be accused of using a soundtrack to operatically intensify our tears and cheers, for what else is a musical for, if not that? It's just surprising that it took this long.

Click here to book your tickets for West Side Story, which is released in Cineworld cinemas on 15th December.