He said he'd be back. And on 31st July, he is. That's because Arnold Schwarzenegger returns to Cineworld screens in Terminator 2: Judgment Day. It's part of our action-packed slate of re-opening movies, which you can view here.

No matter how many times you've seen T2, it demands a rewatch on the big screen. This may even be your first time experiencing the film in the cinema, all the better for showcasing its visual majesty and roaring action sequences. Scroll down to discover five classic scenes that demand your cinema attendance. Hasta la vista, baby.

Everyone knows that T2 is essentially a mega-budget reworking of 1984 classic The Terminator. But what a reworking it is. Writer-director James Cameron was finally able to realise his vision of liquid metal morphing effects, which saw CGI technology come of age in Hollywood. And he triumphed with the striking contrast between the hero and villain.

The film rode the crest of an Arnie rebranding, during which time he'd moved into family-friendly material like Twins and Kindergarten Cop. For that reason, T2 casts him as the saviour cyborg figure, and the serpentine Robert Patrick as the deadly T-1000. Cameron compared Schwarzenegger's T-800 to a Panzer tank and the T-1000 to a Porsche, and the physicality is evident throughout the movie.

Not so much in the film's first riveting chase sequence, however, as the two Terminators are driving vehicles: one a truck in pursuit of John Connor (Edward Furlong), the other a bike in order to come to John's rescue. Cameron's penchant for ambitious stunts and set-pieces is immediately evident when said truck drives beneath an overpass, shears off its roof and continues chasing. It's also a brilliant way of establishing the T-1000's relentless menace.

2. Escape from the hospital

The arresting blue tinge to Adam Greenberg's cinematography gives T2 a vaguely surreal, futuristic atmosphere, even during the scenes set in present-day 1991. The visual style is self-evident during the tense Pescadero Hospital sequence, from which the incarcerated Sarah Connor (Linda Hamilton) vows to escape. That's because she's had a premonition of mankind being wiped out on August 29th 1997 in the titular 'Judgment Day' and vows to stop it.

Although by now a hardened, self-sufficient machine in her own right, Sarah is still haunted by the nightmares of the first Terminator experience from 1984. Hamilton's convincingly spooked performance when Arnie's T-800 lumbers out of the lift in front of her is a pure embodiment of terror – as an actor, she really sells us on the fear of humanoid machines running amok.

The scene also showcases one of the most jaw-dropping T-1000 moments where he slips through metal bars, pausing only to retrieve the pistol that he's carrying. Such small but devastatingly effective moments singlehandedly shaped the future of Hollywood filmmaking.

One of the reasons why T2 resonates is that it's not just a brainless shoot-em-up. Instead, it's a somewhat melancholy story of humanity on a collision course with the future, as we prepare to be wiped out by machines that we've designed. Threaded in with this is the redemptive character arc between the estranged Sarah and John, who must learn to reconcile their differences and work with the T-800 to destroy Skynet designer Cyberdyne Systems.

The human focus amidst the action sequences gives T2 a real emotional pull. This is clear during the pivotal Cyberdyne attack sequence where the efforts of the central trio, plus Cyberdyne chief Miles Dyson (Joe Morton) are interrupted by hordes of policemen. The cops are, of course, only doing their job, and don't understand that the destruction of the company is in humanity's best interests. That sets up the classic Arnie "trust me" moment where he whips out a minigun... and proceeds to kill no-one at all. Just a load of cop cars. It was further proof of how Schwarzenegger sought to change his image at the start of the 1990s.

T2 is undoubtedly one of the most ambitious action movies ever made. Cameron's desire to push the envelope is demonstrated in the jaw-dropping van/helicopter/tanker stand-off towards the end of the movie, as the T-1000 (flying the chopper, naturally) closes in on his quarry. Five and a half miles of strip lighting adorned the Long Beach Freeway that was used in the sequence, and when the helicopter flies beneath an overpass, you'd better believe it was done for real.

In fact, Cameron had originally conceived this entire sequence as taking place in a tunnel. However, logistics demanded that an open freeway be used instead. Nevertheless, the aforementioned chopper stunt is audacious in its bravery. Stunt pilot Charles A. 'Chuck' Tamburro (who earlier leaps from the vehicle when the T-1000 tells him to "get out") was the pilot, and he flew beneath the overpass at a rate of 60 knots.

The fearless Cameron stepped in to capture the close-up shots himself when the stunt crew refused to participate. Are we sure he isn't a Terminator himself?

5. Farewell in the foundry

One doesn't simply come to T2 for popcorn thrills and existential musing about the future of the human race. Everyone knows that the movie pulls an emotional right-hook during its final moments, which reinforces how much we've bought into the idea of the heroic T-800.

As Arnie's valiant cyborg says goodbye to both Sarah and John for the sake of the bigger picture (the chip in his head needs to be destroyed), composer Brad Fiedel does a marvellous job with his signature Terminator theme. It's underpinned with the signature mechanical/robotic percussion, but for the first time it takes on a melancholy air as the T-800 slips into the molten metal with a final thumbs up. It's a sign of how effectively music can invest us in the personality of a non-human character.

The question is: how prepared are you for the impact of this scene on the big screen?

Are you planning to experience T2 all over again on the big screen? Let us know @Cineworld. 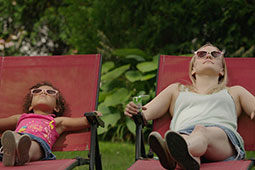 Saint Frances: what you need to know about the acclaimed indie drama