Home Cineworld Blog The Phantom of the Open: director Craig Roberts talks golf, The Big Lebowski and Kanye with Cineworld 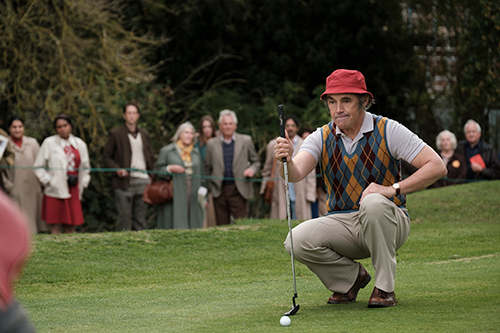 The maxim, 'It's not the winning, it's the taking part," is taken to heart in the sweet-natured and inspirational The Phantom of the Open. Oscar-winner Mark Rylance portrays the real-life Maurice Flitcroft, a dockyard worker from Barrow-in-Furness who managed to enter the 1976 British Open Golf championships – despite never having played a game in his life.

What then transpires is a quintessential underdog tale as Maurice is pilloried by the media, dubbed "the world's worst golfer." However, his loyal wife Jean (Oscar nominee Sally Hawkins) never doubts his tenacity and, against the odds, Maurice begins to emerge as something of a heroic figure.

With the movie on release from March 18th, we caught up with director Craig Roberts to discuss his influences for the movie, plus the unexpected impact of Coronation Street and Kanye West on the story.

The movie focuses on a man playing golf, Maurice Flitcroft, but would you describe it as a golfing movie?

I would say it's not a golfing movie to me. Really, the protagonist could be chasing after anything. But Maurice decided that golf was his calling card or his destiny.

In the same way, Raging Bull isn't really about boxing. Not that Raging Bull was necessarily an inspiration for this movie. The film is really about love and about family. It's about community and people getting behind more. It's our intention to make something that's hopeful and inspiring, and makes people go after what they want.

It really is one of those movies that confirms truth is stranger than fiction. I didn't know the story beforehand and I found myself thinking, on several occasions, 'That can't be true.' But it is, as confirmed by the end credits.

You really need those end credits! When I first read the script, I also thought, 'There's no way this is true.' And if it is true, how has it not been made into a movie already? But once I did the research and watched videos of Maurice being interviewed by Anne Diamond and stuff, I was blown away. I felt like I had to make it.

Did you have to romanticise the true story in any way or did you play it straight down the line?

There's some stuff that's been stretched a little, some of the drama. But in terms of him being banned and going back and donning disguises, all of that is really true. He was a real character. He really wanted to play golf! [laughs]

There are surrealistic flourishes as Maurice imagines himself marching towards golfing greatness. Do you think that we all tend to view our lives and destinies in this grandiose, cinematic way?

I think so. Everybody feels like the main character in their own story. That made its way into the iconography of it all and how we shot it. The opening title of the movie says, 'Maurice Flitcroft IS The Phantom of the Open.' He's starring in his own story. Those surreal moments were in the script anyway.

Simon Farnaby, the writer, devised moments like the one where Maurice goes through the TV and gets hit by the golf club. That's what really attracted me to the script. It reminded me of Billy Liar or almost The Big Lebowski. That's what makes it special. It's nice to really be there alongside the character.

You starred in Submarine, and some of the grander flourishes in The Phantom of the Open reminded me of Richard Ayoade's direction on Submarine. Has he influenced you as a filmmaker?

He's definitely helped my transition to become a filmmaker and he's helped me discover what I wanted to do in my life. I want to tell stories.

I love the way Richard makes movies. It's fantastic and I wish he would make more of them. He's incredible. I can't really replicate Submarine because it was really his own thing. He knows films so, so well.

In The Phantom of the Open, you balance out the comedy with the darker elements, particularly the conflict with Maurice's eldest son, Mike. Was that an important element in humanising the story even further?

Yes, 100%. When we all sat down to discuss how the movie would look and feel, I really loved the drama within it. For me, it feels like a drama in terms of the way it's shot. I think that if we'd shot it like a complete comedy, we wouldn't have allowed the audience to cry or feel the emotions that they hopefully do by the end of it.

To be honest, I go so into the drama of it all that my first cut of the movie wasn't that much of a comedy. It was more of a drama and I had to work to bring the comedy back in. That was a good journey to go on.

"The script reminded me of Billy Liar or almost The Big Lebowski. That's what makes it special. It's nice to really be there alongside the character."

That must reinforce the power of the edit in shaping our emotional response to the material?

Moreso, I was temping the movie with Paul Thomas Anderson and Jon Brion music, which immediately made it feel more serious. It was a long first cut as well. It was three hours long and pretty depressing. Thankfully, nobody will see that version of the movie!

On the subject of the music, I loved the way you incorporated the classic needledrops with the score by Isobel Waller-Bridge. How do you decide when to use music to accentuate the humour and the emotions?

It really is a challenge. It's very easy to go music very quickly when you can't figure things out. Certainly, in the edit where things might not be working, the temptation is to put some music on it, put wallpaper over it.

It's also a challenge when you've got so many source tracks. They're diegetic, as in, originating within the movie as tracks that the characters themselves are listening to. It's then hard to connect that with the score. But that's why Isobel is fantastic. It feels like she's got Maurice's theme throughout, and it really sets the tone of the movie. One of the biggest references for the score was the opening music of Coronation Street. I loved it so much and I asked Isobel if her score could sound like that.

Mark Rylance, of course, completely inhabits the character of Maurice. There's humour and pathos, and lots of subtle mannerisms. How closely did you work with him to construct this singular individual?

Well, when we talked about the comedy of it all, I mentioned Punch-Drunk Love by Paul Thomas Anderson. I love the tone of that movie. The stakes are high and the characters are being thrown loads of stuff. PTA takes social anxiety and flips it so that we're with the character throughout, and that's the funny experience of it. I mentioned that a few times with Mark. But we did the rehearsals and read through the script. We didn't do too much prep.

I knew that Mark would be doing his own stuff and it would work out absolutely. What I love about his performance is his physicality. He's almost Bill Murray-deadpan in a lot of it. He's also got the physicality of a Jacques Tati or a Buster Keaton. That's what works and almost makes it feel like an Ealing Comedy, in a way, although the Ealing movies weren't a reference for this film. We're very lucky that Mark decided to come and play.

Much of the film's emotional heart resides with Sally Hawkins as Maurice's wife, Jean. You starred with her in Submarine and directed her in Eternal Beauty. What do you think is her skill in bringing light to seemingly unassuming characters?

When I was acting a bit more, I felt like I had a limited amount of mannerisms to draw on. Most of the success of acting is found in reacting. The reactions to someone saying something. I used to look at people like Ben Stiller and lift elements from his performances.

Sally, however, pulls new mannerisms out every time. She's just got so many ideas. I'm blown away every time I work with her. I know it's going to be a new experience and that we're going to have a good time. For me, she really is the best. She's also a lovely person and that really helps.

The movie posits that solidarity and perseverance will always win out over mere technical skill. There's heart in that philosophy. Did you find elements of Maurice's character that you related to in your capacity as a director?

Having gone on the journey with Maurice, now, I'm blown away by how much he believed in himself. It's amazing. People should be allowed to be dreamers as much as possible.

In the current climate, do you feel that this is a story that people need to be aware of?

Whenever, really. We love underdog stories because we can see ourselves in people who are trying to do more. Such characters break the box, they break the mold. And Maurice certainly did that.

I've been referencing Kanye West a lot with regard to Maurice. I felt that he was the Kanye West of golf. At the beginning of Kanye's career, he wouldn't take 'no' for an answer and he was trying to convince people that he could do something. It didn't work out for Maurice as it did for Kanye but the moral of the story is, 'What do you see as success?' Is it winning the competition or the taking part and proving to yourself that you can do it?

"I'm blown away by how much Maurice Flitcroft believed in himself. It's amazing. People should be allowed to be dreamers as much as possible."

If our interview has inspired you, then click here to book your tickets for The Phantom of the Open. The movie is released in Cineworld cinemas on 18th March, so don't forget to tweet us @Cineworld with your thoughts on both the movie and the interview.