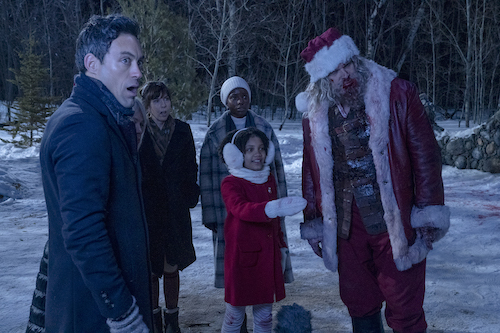 Let us say it: this week's new release Violent Night is an absolute blast of anarchic festive mayhem. Stranger Things' David Harbour inverts our expectations of Father Christmas, sledgehammer in hand, as he puts a host of homicidal baddies firmly on his naughty list.

Tired of Christmas films that make you feel like you want to hurl? Allow Violent Night to act as the riotously entertaining antidote to the twee schmaltz that dominates this time of the year. (Truthfully, this is more Gremlins than It's a Wonderful Life.) Here are our reasons why you shouldn't miss the movie at Cineworld.

1. This Santa is in tune with his berserker rage

We won't give away specifics. Suffice it to say that there is a very good reason why David Harbour's Santa is efficient at killing people. The route toward discovering how fleshes out the character's backstory and also provides a historic, near-mythical backdrop to the otherwise contemporary story of Crimbo bloodletting.

Harbour's Saint Nick is introduced downing pints at a bar. He's the original Father Christmas and has become progressively disillusioned over the increasingly cynical, materialistic nature of the festive season. However, his mission to save a young girl and her family from a gang of hideous crims is exactly what this Santa needs to restore his faith and save the day.

2. It melds a load of your favourite Christmas flicks together

We're used to Christmas movies referencing stone-cold staples like Die Hard and Home Alone. In fact, Violent Night's tribute to the latter movie provides one of its most outrageously entertaining moments, a textbook exercise in escalating absurdity and comic gruesomeness.

It's pleasing to note that Violent Night doesn't rest on its laurels with the Die Hard aping. In fact, there are whole tranches of visual references that pay particular homage to the snowmobile-laden action of Die Hard 2. Plus, the presence of National Lampoon's Christmas Vacation star Beverly D'Angelo, here playing a foul-mouthed, horrible and filthy-rich matriarch, is bound to get fans smiling.

3. The gore and kills are insane

Again, we don't want to spoil the surprise. Let us say that it's best to experience Violent Night with a large crowd – all the better for soaking up the visceral and shocked reactions to Saint Nick's increasingly inventive killing methods.

We've already mentioned the sledgehammer (and there's a backstory to that as well). When you throw ice skates, wood chippers, nails, bowling balls and more into the mix, rest assured that the movie hits the morbid sweet spot and then some. It's exactly what you would expect from the producers of Atomic Blonde and the relentless Bob Odenkirk bus fight movie, Nobody.

There's an enjoyably biting undertow about the haves and have-nots as related to Christmas excess. It's not laboured but adds a bit of spice to the usual Christmas cinnamon flavour.

The writing of the baddies is also sharper than most. John Leguizamo's lead baddie undergoes an amusing journey as he and his henchman are forced to reconcile with the fact that Santa is, in fact, real.

5. ... But it also preserves a sweet message

Buried beneath the limb-lopping and carnage is a genuinely stirring ode to the importance of belief. What does it mean when children grow up to become cynical adults and completely lose sight of Christmas magic?

The contrast between innocence and anger, as relayed through David Harbour's central Santa figure, means that Violent Night is poised to hit you in the feels – in every conceivable way.

Convinced? Then click here to book your tickets for Violent Night, opening at Cineworld on December 2nd.