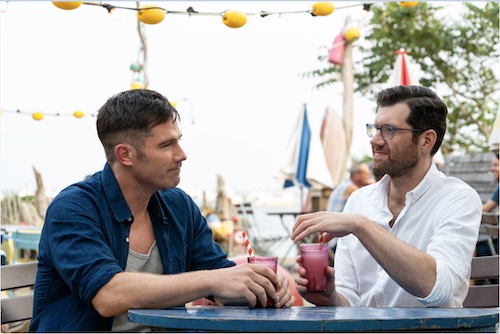 Say it loud, say it proud: new rom-com Bros salutes the LGBTQ community with hilarity and conviction. It arrives on Cineworld screens this October and it has previewed in advance for Cineworld Unlimited members.

Writer and star Billy Eichner translates his sharp insight and stand-up persona into his role as Bobby. He's the curator of a newly opened History of LGBTQ Museum in New York, except no one on the board of directors can quite decide what to emphasise.

However, Bobby's real problem is a lack of intimacy in his personal life. He's avowedly single – until he meets Aaron (Luke Macfarlane) at a club night. Sparks immediately fly, so can Bobby come to terms with his status as a gay man in the modern day and make a relationship work?

The movie combines Eichner's talents with that of comedy institution Judd Apatow (Knocked Up; Bridesmaids) to deliver a progressive and crowd-pleasing hit. We've rounded up a selection of the Unlimited reactions, so scroll down to check them out and discover why Bros needs to be on your must-see-at-Cineworld list.

Bros was absolutely amazing, it was a really sweet film but also absolutely hilarious, I've not laughed like that in ages, the script was so well written and some gags had me and my mate howling!! Might just be my comedy of the year!⭐️⭐️⭐️⭐️⭐️ #cineworldunlimited @cineworld https://t.co/gz5Pi5v2Im

It was really good. A lot of it works because the romance here is really endearing and the film throws so many jokes at you that you’re bound to laugh at something.

It’s also so unapologetically queer and you really have to admire that.

Unapologetically queer, touching and laugh out loud HILARIOUS! I haven’t laughed like that in a film in a long time.

A hilariously funny yet brutally honest film and told in such a real and relatable way. I laughed, cried, gasped and laughed lots more. #loveisloveislove #loveisuniversal #lovenotlove #lgbtq+ #BrosMovie @UniversalPics

As a trans person and part of the target audience, I thought it was largely good. It took a while to get going and it had a far stronger second half than the first, but a solid 7/10

If you missed the Unlimited screening, then you can take the journey with Bobby and Aaron later this month. Click here to book your tickets for Bros, which opens at Cineworld on October 28.