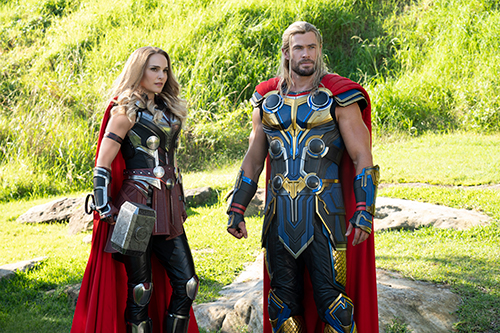 Marvel's Thor: Love and Thunder is on course to be one of the studio's greatest movies. At least, if early reactions from the world premiere are anything to go by.

Chris Hemsworth's brawny, beefy Thor has turned his back on Asgardian duties. Tessa Thompson's Valkyrie is now overseeing the new Asgard, the old one having been destroyed in Thor: Ragnarok. And Natalie Portman's Jane Foster is now cemented as the Mighty Thor, Mjolnir firmly in hand.

However, upon the arrival of Christian Bale's fearsome Gorr the God Butcher, Thor realises he can't put the past behind him so easily.

Taika Waititi's second Thor movie, after 2017's Thor: Ragnarok, has been singled out for its typically irreverent humour. Praise has been reserved for Portman and Thompson's performances, and critics have also pointed toward the film's surprisingly poignant undercurrents. However, Waititi fans will know his knack for finding emotion in humorous situations (Hunt for the Wilderpeople et al).

Deriving influence from Jason Aaron's Mighty Thor comics, Waititi has described his new Marvel epic as a mash-up of a love story and Conan the Barbarian. And Cineworld is the arena to soak up the movie's glorious eccentricities, romantic overtones and thunderous action set pieces this July.

Scroll down to discover what preview audiences made of the latest Thor extravaganza.

#ThorLoveAndThunder might be my favorite Marvel movie and it also might be their very best. A sublime mixture of extreme silliness, dreamy surrealism and genuine emotion, with some of the most visually inventive set pieces in the MCU. Full of delightful surprises. Just great.⚡️ pic.twitter.com/7Dvku7F9yF

#ThorLoveAndThunder is electric! A wacky, high energy delight with a cast full of aces crushing one scene after the next. LOADS of laughs (my face legit hurts), menace of Christian Bale’s Gorr is chilling, but most of all loved that it’s a film brimming with good vibes & heart. pic.twitter.com/CjVHkxAprC

The best parts of #ThorLoveAndThunder are Tessa Thompson as King Valkyrie, Natalie Portman as Jane Foster/Mighty Thor and Christian Bale as Gorr.

Thompson and Portman have a buddy cop-esque dynamic I loved, and Bale's Gorr is definitely one of the better villains in the MCU. pic.twitter.com/92SVUj54XX

Another classic Thor adventure! #ThorLoveAndThunder is everything I wanted it to be. Big, colorful, weird Guns N' Roses-fueled battles to go w/ a hopelessly romantic story about discovering love in unexpected places. Christian Bale & Russell Crowe are especially great. And Korg! pic.twitter.com/fu0gTUuMRj

Are you worthy enough to claim your Cineworld seat for Thor? Of course you are.

Click here to book your tickets for Thor: Love and Thunder, opening in Cineworld cinemas on 7 July.