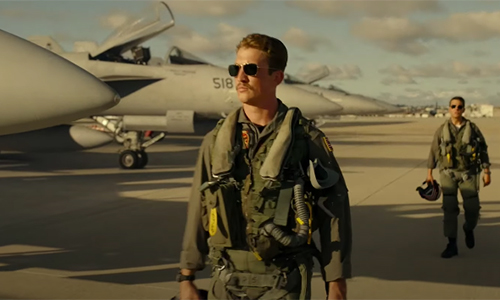 The 2022 Cannes Film Festival is now underway, and the event has nailed its colours to the mast with a thrilling Tom Cruise/Top Gun-themed fly-by.

As if that wasn't enough, there's also a diverse host of movies playing inside and outside of the main competition. Scroll down to find out more.

Playing out of competition at Cannes, Tom Cruise's Top Gun sequel lit up the Croisette during its spectacular premiere screening. It also garnered a five-minute standing ovation, which should tell you something.

Tom Cruise returns to the role of Pete 'Maverick Mitchell', the hotshot fighter pilot now turned reluctant Naval trainer. The twist this time is one of his charges is Rooster (Miles Teller), the son of Maverick's late wingman Goose (Anthony Edwards).

Director Joseph Kosinski keeps the aerial action, laughs and outsized emotion coming in this spectacularly entertaining sequel. Lensed in IMAX for maximum impact with dynamic in-cockpit footage captured by the actors, it's bound to have viewers caught between gripping their seats and fist-pumping the air.

From its backlit sunset beach sequences to the synth-laden score from Harold Faltermeyer, Hans Zimmer and Lorne Balfe (with a cracking end credits contribution from Lady Gaga), this is guaranteed to blow away the pandemic cobwebs.

Click here to book your tickets for Top Gun: Maverick.

We know that this won't have a happy ending, but it's all about the journey, not the destination. And what a journey it promises to be, tracing the unassuming young Tennessee boy from his Gospel-loving origins to worldwide rock and roll colossus.

Austin Butler is said to be transformative as Elvis Presley with the latter's widow Priscilla Presley claiming him worthy of an Oscar. Tom Hanks is waiting in the wings as Presley's calculating manager Colonel Tom Parker while the dynamic re-enactments of classic Presley concerts are bound to get us all shaking our hips.

Talking of directors who don't do things by halves, George Miller is another. The Mad Max: Fury Road helmer gravitates towards the realm of the love story in this adaptation of A.S. Byatt's short story The Djinn in the Nightingale's Eye.

Said djinn is played in the movie by Idris Elba, and he grants a series of wishes to Tilda Swinton's bookish scholar. This is the jumping-off point for Miller's typically fertile imagination – let us not forget that, as a filmmaker, he's jumped from writing the script for Babe to staging the ghoulishly comic The Witches of Eastwick.

One can expect the kind of sweep that we saw in Fury Road, but presumably with less flame-throwing guitars.

Oscar winners Anne Hathaway and Anthony Hopkins star in a movie that's described by Variety as 'a personal drama based on Gray's childhood.' More details as we get them.

The high prince of body horror, David Cronenberg, makes his long-awaited return to the big screen in this grisly-looking and provocative account of a truly dystopian future.

In his fourth collaboration with the director, Viggo Mortensen plays a sideshow artist who, in keeping with the rest of society, sports and flaunts his artificial organs as part of a bizarre evolutionary upgrade. Lea Seydoux plays his on-stage sidekick and Kristen Stewart plays a suspicious investigator in a movie that, in the words of Cronenberg himself, is bound to provoke more than a few walk-outs.

There's no trailer and plot details are thin on the ground, but Showing Up is said to revolve around an artist seeking more inspiration from her life.

Given the strength of Williams and Reichardt's past collaborations, ranging from Wendy & Lucy to Certain Women, we're imagining this to be a typically stimulating and engrossing affair.

She now turns her sights towards an adaptation of the 1986 novel The Stars at Noon by Denis Johnson. The story involves an illicit romance between an English businessman and an American journalist that is beset by the eruption of the Nicaraguan revolution.

Japanese director Hirokazu Koreeda is a master of understated observational drama. The critically acclaimed Shoplifters, released in 2018, was preceded by the equally perceptive likes of I, Wish and Still Walking, movies that embody the maxim 'still waters run deep'.

His new movie, Broker, is based around the real-life concept of donation boxes in which people place their unwanted infants. As ever with Koreeda, one imagines that a relatively straightforward conceit will ultimately ripple with multifaceted levels of emotional complexity.

South Korean director Park Chan-wook famously provoked viewers with his octopus-eating spectacle in 2004's Old Boy. That movie, a twisted, Jacobean revenge odyssey, was at the vanguard of the recent South Korean movie explosion, which has encompassed the Oscar-winning likes of Parasite.

His new movie purports to be a mystery thriller in which a detective falls for a murder suspect. So far, so Basic Instinct, but Park Chan-wook isn't one to court conventionality. Rest assured, this is bound to unsettle and enthrall in equal measure.

Which Cannes 2022 movie are you most excited about? Let us know @Cineworld.