Itching to get back to the big screen? Well, we've got some terrific Cineworld news for you. Scroll down to discover all of the classic movies that you'll get to enjoy when Cineworld re-opens on 31st July.

Already announced on the blog, we're delighted to be hosting the 40th-anniversary screening of this Star Wars classic. It's widely considered to be the best in the saga, and this is your chance to witness that Luke Skywalker/Darth Vader twist on the big screen where it belongs.

As far back as we can remember, we've wanted to bring you Martin Scorsese's mob masterpiece. And it will soon be roaring its way towards Cineworld in a blaze of energy, violence and rock and roll, as Ray Liotta, Robert De Niro and an Oscar-winning Joe Pesci go to work.

Frank Darabont's engrossing Stephen King adaptation never fails to move with its story of friendship forged within the walls of a maximum-security prison. Revisit Shawshank and its litany of eye-widening, heart-rending scenes on the big screen.

Best movie trilogy of all time? For many, the irresistibly energetic and optimistic Back to the Future series is up there. Revisit each of Marty McFly's (Michael J. Fox) adventures in Cineworld, and rekindle the wonder you felt when watching them for the first time.

Ridley Scott's unforgettable depiction of a dystopian Los Angeles set a new benchmark for science-fiction cinema. And you can experience the majesty all over again when Blade Runner returns to Cineworld, shimmering and nightmarish in its depiction of an android-riven future.

It's time to break out the truffle shuffle as the classic kids' adventure returns to Cineworld. Helmed by Richard Donner and produced by Steven Spielberg, this irreverent treasure hunt story made stars out of Sean Astin, Josh Brolin and more.

Director James Cameron upgraded his lean, mean 1984 thriller into an altogether more spectacular beast in T2. With its revolutionary liquid metal morphing effects, plus the contrast of good guy Arnold Schwarzenegger with devious villain Robert Patrick, it remains one of the defining blockbusters of the 1990s.

Which of these classic movies will you be watching in Cineworld? Let us know @Cineworld. 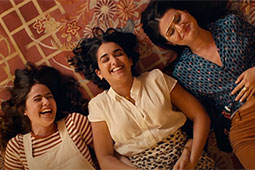