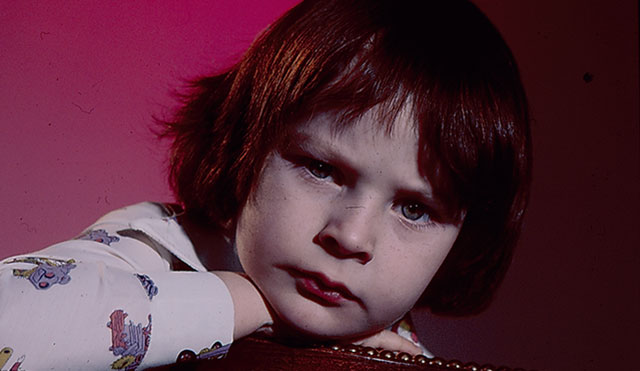 Halloween is almost upon us, and that means it's the perfect time to indulge in your favourite scary movies. If you're looking for inspiration, we're here to help with our blog list of the creepiest horror movie kids.

This has long been a favourite trope of horror filmmakers – there's something about an apparently innocent child being used as a tool of evil. Here are 10 movies that pulled off the trick especially well.

John Wyndham's novel The Midwich Cuckoos famously relates the terror that befalls a sleepy English village. When the local community's children are supplanted by blonde-haired, preternaturally adult and otherwordly beings, it sets in motion a chain of chilling events. The atmosphere of the novel is well preserved in the black and white film adaptation from director Wolf Rilla, who effectively juxtaposes the recognisable surroundings with the extraordinary events at the story's centre.

Horror movie children don't come more famous than Linda Blair's possessed, pre-adolescent Regan in The Exorcist. William Friedkin's adaptation of William Peter Blatty's novel was a horror sensation, causing lines around the block and inducing hysteria in those who saw it. Little wonder that the movie was propelled to blockbusting grosses of more than $700 million – remarkable for its day. But it's Blair's frighteningly plausible depiction of an ordinary girl beset by demonic evil that resonates, pea soup vomit, spinning heads and all.

Regan has competition in the creepy child stakes from the deceptively cherubic Damien. He's better known by his official title of The Antichrist, and he wreaks havoc at various stages of his life throughout the successful Omen trilogy. However, it's in Richard Donner's original that he's most effective, a seemingly innocent young boy unaware of the Satanic destiny that rests on his shoulders. However, Jerry Goldsmith's Oscar-winning, choral-led score tells us all we need to know about the child's dark origins – and what he means for mankind.

He may be best known in his adult form, complete with an inverted white William Shatner mask (seriously, we're not making that up). But slasher icon Michael Myers started his evil odyssey at a chillingly young age. This is evident from the celebrated opening shot of John Carpenter's seminal 1978 horror, Halloween. A subjective experience, we're firmly in Michael's point-of-view as he commits his first murder. And the blank-faced lack of motivation comes to embody the evil killer that will stalk Haddonfield, Illinois decades later on Halloween night.

How scary can a pair of girl twins be? In Stanley Kubrick's hands, they are blood-curdlingly terrifying, made all the moreso by disquieting, floating camerawork and a discordant soundtrack. Living at the isolated Overlook Hotel, young psychic Danny Torrance (Danny Lloyd) is attuned to the supernatural menace within its walls. When he skirks the corner on his tricycle and runs into the murdererd Grady girls, it's enough to send shivers up anyone's spine. That it occurs in bright light is further testament to Kubrick's genius.

Stephen King has unleashed any number of horror icons upon the world, from Carrie White to Annie Wilkes. Even so, the malevolent Gage Creed takes some beating. Resurrected by the power of an Indian burial ground, Gage comes to embody that famous maxim, 'be careful what you wish for'. In the 1989 film adaptation, as per the novel, all his bereaved parents want is their son back. What they get is a malevolent entity who has been dragged back from the other side, spelling doom for everyone involved.

Hideo Nakata's Ringu was a true Japanese blockbuster, setting in motion a craze for spooky supernatural tales populated by lank-haired spirits on a crusade of vengeance. Few, however, matched the unsettling atmosphere of this, the story of a cursed tape that kills its viewer within seven days. It all culminates in one of horror's most terrifying finales, as the spectral child Sadako crosses from the realm of TV into real-life to wreak havoc. It's been teased from the start, and the imaginatively frightening end result does not disappoint.

Here's a horror movie kid of a more sympathetic ilk. Young Haley Joel Osment got an Oscar nomination for his incendiary performance in M. Night Shyamalan's supernatural thriller. As the quavering, vulnerable child who can "see dead people", Osment's Coel is heart-wrenchingly believable, investing the scenario with as many tears as scares. The Sixth Sense knocked us sideways with its final twist, but it's Cole's profound sense of fear that makes the film resonate.

Backed by Guillermo Del Toro and directed by J.A. Bayona, The Orphanage is a richly atmospheric haunted house movie in the tradition of The Innocents. When Belen Rueda's mother and orphanage owner loses her son, she's utterly bereft. But signs of what might exist on the other side begin to manifest, primarily in the form of a sinister child wearing a sack mask. The ultimate reveal of the child's fate, and how it ties into Rueda's character, lends The Orphanage an emotional hammer blow, reminding us that great horror centres on character.

We finish up with this fine Swedish vampire tale, adapted from the novel of the same name. Director Tomas Alfredson cloaks the movie in a suppressed, wintry atmosphere of perpetual snow, against which dashes of bright red vampiric blood are contrasted. Let The Right One In is primarily, however, a story of solidarity and outsiderness, as bloodsucker Eli, forever trapped in a young body, makes an alliance with young bullied kid Oskar. It's a superb melding of the fantastical and the believable.

Which horror movie kid really creeped you out? Let us know @Cineworld. And happy Halloween!