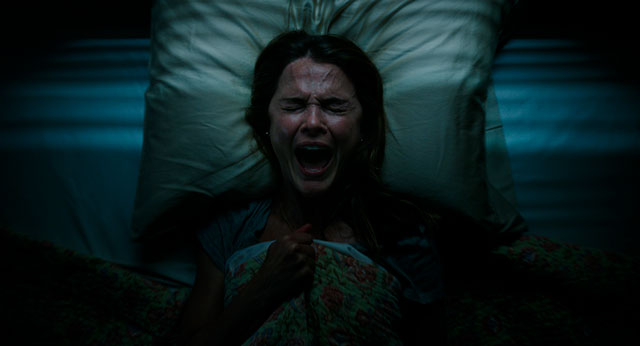 Are you looking forward to 2021? Let's face it, we all are. So, we thought we'd help you Cineworlders with our blog round-up of upcoming horror movies, set to chill the blood and get the heart racing in the best possible way.

From creature features to stories of masked maniacs on the loose, these movies are set remind us why being scared is very fun indeed. Scroll down to discover our list. Release dates are accurate at the time of publication as per the Film Distributor's Association. (Also, don't forget to check out our lists of 2021 comic book movies, 2021 family movies and 2021 action movies.)

In 2018, A Quiet Place scared up a storm at the box office, bringing us the story of a family beset by sound-sensitive monsters. Behind the camera, John Krasinski demonstrated his flair for inventive set-pieces, all the while transforming every creak and groan into the equivalent of a doom-laden thunderclap.

We're now going to be on tenterhooks all over again in A Quiet Place: Part II, which reunites us with Emily Blunt's Evelyn Abbott and her family (this time absent Krasinski's Lee, although he will appear in flashbacks). The Abbotts must now look for a new home, but Cillian Murphy's survivalist character Emmett is set to complicate things. Could this possibly be more imaginative and scary than the first movie?

2. The Conjuring: The Devil Made Me Do It

The blockbusting Conjuring Universe continues to grow with the third Conjuring movie. Back in 2013, James Wan's ghostly chiller proved a sleeper hit at the box office, bringing us the fraught and jumpy tale of a 1970s Rhode Island haunting. The movie set in stone many aspects of the eventual Conjuring mythology, including the dreaded Annabelle doll. And it also introduced us to Patrick Wilson and Vera Farmiga's ghostbusters Ed and Lorraine Warren (real-life individuals who were known to tackle paranormal activity).

After several spin-off Annabelle movies, The Nun and more besides, we now alight on another terrifying case for the Warrens, directed by The Curse of La Llorona's Michael Chaves.

Dare you say his name five times? 1992's Candyman was a superior slasher movie, drawing on the power of urban legends and racial tension in its tale of a black hook-handed serial killer (played to unforgettable effect by Tony Todd). Is Candyman apocryphal, or actually real? In the first movie, it was Virginia Madsen's grad student Helen who paid the price for her curiosity.

Decades later, it's Chicago artist Anthony (Watchmen's Yahya Abdul-Mateen II) who fails to heed the warnings. In this 'spiritual sequel', Anthony returns to the now-gentrified Cabrini Green in Chicago, Candyman's old stomping ground, to interpret the ghoul's backstory, which proves to be a big mistake. Top Boy's Nia DaCosta directs, Get Out's Jordan Peele writes and produces, and Todd returns to the role that made him a horror icon.

2021 is set to be a physical workout for horror fans. Once we've caught our breath in the wake of A Quiet Place: Part II, it's time to hold it all over again for Don't Breathe 2. Back in 2016, the first Don't Breathe, directed by Fede Alvarez, emerged as a ruthless and relentless suspense story, in which a group of robbers find the tables turned by their blind target.

The mark in question was played by Avatar's Stephen Lang, on fearsome form, and when Don't Breathe proved a hit at the box office, it was expected he would return. And he soon will in Don't Breathe 2, with Alvarez stepping back into a production role and the original film's writer Rodo Sayagues taking over as director.

The reunion with both masked serial killer Michael Myers and his main target Laurie Strode (Jamie Lee Curtis) was a nostalgia-tingling sensation at the box office, and the mythology continues in Halloween Kills. As before, three different generations of women are forced to grapple with the fall-out from Michael's killing rampage, and Carpenter himself is promising a bloody, spectacular escalation.

British institution Edgar Wright has always had an affinity for horror, going right the way back to his zombie-themed episode of cult TV series Spaced. That episode famously inspired the plot of rom-zom-com Shaun of the Dead, but despite trace elements of horror in that film, plus the likes of Hot Fuzz and The World's End, he's never made an all-out chiller. Until now, that is.

Last Night in Soho channels the paranoid spirit of Roman Polanski, Nicholas Roeg and other genre masters to bring us a sixties-set story of psychological madness and apparent time travel. The Witch's Anya Taylor-Joy leads the excellent cast (including Dame Diana Rigg in her final role) and 1917's Krysty Wilson-Cairns co-writes the screenplay.

Nick Antosca's eerie short story 'The Quiet Boy' forms the basis of this spine-tingling chiller from Black Mass director Scott Cooper. Antlers centres on the mythology of the wendigo, a feared demon from Native American folklore. When a troubled young boy forms a pact with such a monster, it brings terror down on his local community.

Cooper brings the rustic atmosphere that marked his acclaimed Christian Bale drama Out of the Furnace while producer Guillermo del Toro is clearly no stranger to monster outings, having helmed the likes of Hellboy and The Shape of Water. The Rise of Skywalker's Keri Russell plays a concerned teacher and Jesse Plemons plays her policeman brother.

Initially set for a February 2021 release, Antlers has now been postponed and is awaiting a new date.

Which of these 2021 horror movies are you most excited about? Let us know @Cineworld.