Home Cineworld Blog House of Gucci: Lady Gaga threatens to burn it all in new trailer for Ridley Scott's latest 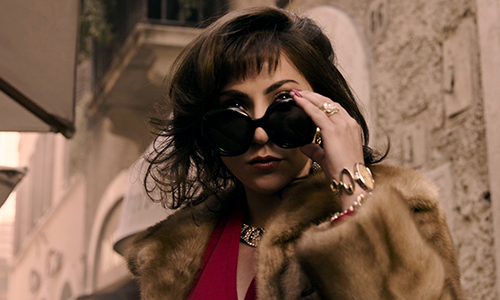 Lady Gaga adopts her best poker face in the operatic new trailer for Ridley Scott's House of Gucci. The director's lurid new melodrama is based on true events, focusing on the internecine scandal and murderous betrayal that ensued within the fashionable Gucci ranks during the 1990s, setting off a chain reaction that resulted in the death of Maurizio Gucci.

Scott peels back the layers of one of the world's most iconic fashion houses, exposing us to a world of avaricious greed. Gaga plays the conspiratorial Patrizia Reggiani, the woman responsible for plotting the death of her husband Maurizio (Adam Driver), scion and heir to the throne of the Gucci empire.

The insane cast also includes Al Pacino, Jeremy Irons, Salma Hayek and Jared Leto (the last of whom is almost outacted by his comedy prosthetic nose). The accents are ripe and the tensions are high in this adaptation of Sara Gay Forden's book 'The House of Gucci: A Sensational Story of Murder, Madness, Glamour, and Greed'.

Scott adapts the text with help from Seven Years in Tibet writer Becky Johnston. The movie comes hot on the heels of Scott's sword-clanging, morally disturbing historical epic The Last Duel, starring and co-written by Matt Damon and Ben Affleck with memorable turns from Adam Driver and Jodie Comer.

The Last Duel proved to be a box office bomb, so we're curious to see how audiences will respond to the mercurial Scott's latest movie. He's always skipped between genres, from sci-fi (Alien and Blade Runner) to road trip movies (Thelma and Louise) and Ancient Roman epics (Gladiator). The ripe-looking modernity of House of Gucci doesn't call to mind many recent Scott movies (maybe All the Money in the World?), so we'll see how it goes down. It's set for release in Cineworld on 26th November.