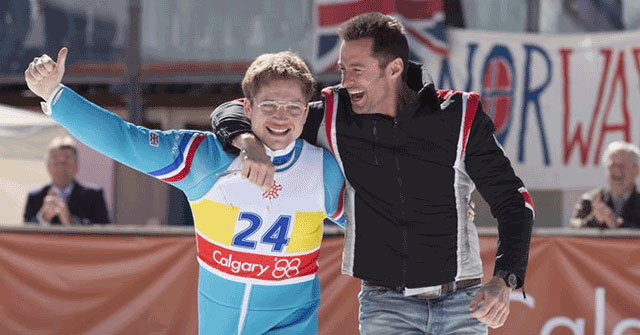 Happy Friday! It's time to turn that frown upside down because today is International Day of Happiness, and boy do we need some of that at the moment.

To brighten your mood, here are 19 feel-good movies that can always effortlessly lift our spirits.

Who could resist Kingsman star Taron Egerton's winningly infectious turn as plucky British ski-jumper Eddie 'The Eagle' Edwards? Wild Bill director Dexter Fletcher's movie is the quintessential underdog story, one that compels us to do nothing less than cheer from our seats and good about the world.

Factor in X-Men's Hugh Jackman as Eddie's no-nonsense trainer Jackson Peary and it's a done deal. Plus, that Hall and Oates montage is a real winner.

Before he brought us the jaw-dropping comic book thrills of Kick-Ass and  the X-Men universe with 2011's First Class, director Matthew Vaughn delivered one of the greatest feel-good movies of the 2000s. And we can't help but feel it's pretty underrated.

How much feel-good spirit is it possible to pack into one movie? British comedy institution Richard Curtis refuses to hold back on either the laughs or the tears in his star-studded directorial debut, a sprawling anthology of emotional that criss-cross London (and beyond) in the run-up to Christmas.

Even so, we still think it's Bill Nighy's hysterically funny turn as an rocker that warms the heart the most – check him out below.

4. The Perks of Being a Wallflower

Logan Lerman, Emma and Ezra Miller make for one of the most irresistible trios in recent memory in this uplifting and indie charmer. Seriously, who can resist the David Bowie 'Heroes' moment, or indeed any other for that matter?

Filled with memorable characters and a refreshing lack of sentimentality, it earns the 'feel good' label and then some.

Who can resist the power of Tom Hanks' Oscar-winning performance as loveably slow-witted Forrest?

It's an underdog story through and through as our title character relays his epic, and sometimes tragic, life from his early childhood in leg braces to his epic running across America and the ups and downs his great love Jennie (Robin Wright). Even so, it's the spirit of disabled Vietnam veteran Lt. Dan (Gary Sinise) that really gets us smiling.

6. Back to the Future

Is there a single scene or second that you can remove from this time-travel masterpiece? No, we thought not.

Right from the off it carries us on an infectious air of fun and adventure as Marty McFly (Michael J. Fox in a career-defining role) travels back in time to save his parents' marriage, all with a little help from wacky Doc Brown (Christopher Lloyd). performances, special effects, music – it all comes together perfectly.

The spirit of rock and roll courses through this classic Jack Black comedy, in which he plays a rebellious musician posing as a teacher at a posh prep school who inspires his pupils to cue the music. We can't help but fall in love with Black's anarchic attitude and it's huge fun watching these kids transform into music gods in front of our eyes – rock on!

Whenever we want to have the time of our lives we stick on this timeless eighties staple, one in which the heat between stars Patrick Swayze and Jennifer Grey radiates from the screen.

With the former playing the put-upon Baby and the latter playing her hunky dance instructor Johnny Castle who compels her to get out of the corner, it's the stuff feel-good dreams are made of.

It's hard to resist a rags-to-riches story, and this one catapulted Julia Roberts from watchable actress to full-blown A-listers.

She plays a hooker who is transformed, ugly duckling-style, into a high society figure by suave Richard Gere – a ridiculous story for sure, but who says that everything has to be based on reality? In truth, the formula for movie happiness is right here.

Movies were never the same again after Pixar unleashed their first CGI adventure. A wondrously imaginative, hilariously funny and heart-wrenchingly emotional feast, it plays on idea: what if our toys were able to come to life?

Let's face it, this is something that has crossed all of our minds when we were kids, and watching the glorious end results is nothing less than happiness distilled in movie form.

We've all had that urge to bunk off school – and John Hughes' timeless eighties comedy brilliantly plays on this wish-fulfillment fantasy. It's a movie that brims with a sense of youthful freedom, and that's exactly what we need to feel happy.

it wouldn't work at all without Matthew Broderick's effortlessly charming central performance as Ferris, the wise- teenager that we all want to be.

Director Amy Heckerling brilliantly moved the work of quintessentially English author Jane Austen over to sun-baked California in this hit comedy, one that made a superstar of Alicia Silverstone (albeit briefly!)

It makes us laugh in recognition of our high school days and it makes us finally fall in love with its smart-mouthed characters – exactly what we expect from a movie that makes us feel a million dollars.

In 2016, we marked the centenary of the legendary Roald Dahl's birth, and adaptations of his work don't get better than Danny De Vito's heartwarming family classic, in which Mara Wilson won our hearts as the book-loving title character.

As Matilda learns to defy both her horrid parents and fearsome headteacher The Trunchbull (Pam Ferris), we positively find ourselves glowing with happiness.

14. Guardians of the Galaxy

Marvel's movies are lots of things – exciting, adrenaline-pumping, spectacular – but can they ever be described as 'feel good'? this one can.

Far kookier, more unpredictable and joyously lighthearted than its other blockbuster brethren, Guardians soars off the back of a soundtrack and an utterly winning central performance from Chris Pratt as . Truly, this is a blockbuster that puts the biggest of smiles on our faces.

We all love a klutz and they don't come klutzier than hapless singleton Bridget Jones, wonderfully played by Oscar nominee Renee Zellweger who nails the English accent and mannerisms of author Helen Fielding's character.

However bumbling Bridget is, we can't help but fall in love during her quest to find true happiness, which may reside in the form of sleazy Daniel Cleaver (Hugh Grant) or pompous Mark Darcy (Colin Firth). In 2016, Bridget Jones's Baby resolved her story in fine style.

This true story of the world's first Jamaican bobsled team always tops our list of the greatest comedy movies. Not only a hilarious fish-out-of-water story but also an inspirational one of sticking true to your dreams, it contains everything needed for raising one's mood and also features the late John Candy in one his greatest roles. Sorted.

It still pains us to think that Robin Williams is no longer here – but we can take solace in the unforgettable movies he left behind. One of his biggest hits brings the laughs and plays on the tear ducts as his divorced father poses as a Scottish nanny in order to spend more time with his kids. It's the kind of wholesome enjoyable experience that the movies were made for.

Colin Firth won his first Oscar – and the hearts of people all over the world – with his stirring portrayal of stammering King George VI, who must overcome his impediment whilst Great Britain into World War II.

It's always a treat to watch 'Bertie' grow in stature to become the king we know he can be, and the hilariously prickly scenes with therapist Lionel Logue (Geoffrey Rush) are a delight.

we've cheated a bit here – but who doesn't love Disney? And the really great news is that we're getting new live-action remakes of two classics in the next couple of years - The Lion King AND Mulan. Will they even begin to bottle the wide-eyed, feel-good spirit of the original animated classics? Well, at least we can go back and repeatedly watch them whilst we decide.

What are your feel good movie hits? Tweet us your choices @Cineworld and using #InternationalDayofHappiness.