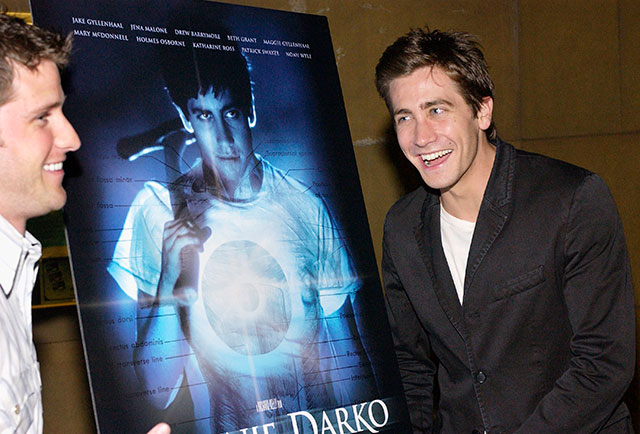 On 19th January 2001, Sundance Film Festival audiences came face to face with a truly bizarre adolescent odyssey. Donnie Darko, directed by Richard Kelly, launched Jake Gyllenhaal into stardom, and unleashed a truly nightmarish persona in the form of Frank. The latter is a demonic rabbit who compels the titular, tormented Donnie (Gyllenhaal) to destructive acts of wanton abandon. Oh, and there's the slight issue of the impending apocalypse, ominously signalled by Frank and further reinforced by a jet engine that crashes into Donnie's house.

This David Lynch-style fantasy is mixed with all manner of recognisable adolescent angst. Donnie finds himself attracted to his new classmate Gretchen (Jena Malone), he clashes with his sister Elizabeth (Gyllenhaal's real-life sibling Maggie) and is compelled to take therapy lessons with a shrink, Lillian (Katherine Ross). This plays out to a woozily addictive soundtrack of 1980s hits, from The Church's 'Under the Milky Way' to Echo and the Bunnymen's 'The Killing Moon'.

The movie (produced by Drew Barrymore, who also stars) was a box office disaster on its eventual release in the USA in October 2001. Audiences were confounded and critics alienated by Kelly's surreal, elliptical time travel rites-of-passage movie, one that also throws in Patrick Swayze, in a revelatory role as a sleazy self-help guru. However, it garnered a warmer reputation in the UK when it arrived in October 2002, buoyed by the moodily arresting Gary Jules cover of Tears For Fears' 'Mad World'.

In the years since Donnie Darko has only pierced further and further into the consciousness. It's now established as a cult classic, although Kelly's much-maligned director's cut some years later was lambasted for explaining away the mystery. The movie may discard narrative logic, but its emotional core speaks to the alienation felt by teenagers the world over. Disruption of logic, mistrust of authority and burgeoning rage, all of which are experienced by Donnie, fashion a powerful connection with the adolescent audience.

Nostalgia was stoked on Instagram when Jake Gyllenhaal dug out his script for the movie. He thanked all the fans who had stood by the film in the last 20 years, while confessing that its overall message continues to elude him.

So, what does Kelly think about the wider message of the movie? On the subject of Donnie being dead the entire time, he told NME in 2017 that he "didn’t have an answer to that question". Kelly then added: "I think the film argues that life and death can perhaps coexist, that time is not necessarily a purely linear thing."

And the possibility of a sequel? (This is disregarding the forgotten movie S. Darko, based on Donnie's youngest sister.) Speaking to HMV, Kelly said: "I think there’s something much bigger and more ambitious to do in that universe. It’s big and expensive and I think there’s time to get to that. I want to make sure we’ve got the budget to do it justice and not to compromise anything. Another story in this world needs resources and we need to have that in place. I need to get my next film out of the gate and then we can go back and look at it.”

When the movie was first doing the rounds after Sundance 2001, it was perceived as so strange, no studio was willing to purchase it. Director Christopher Nolan then stepped in, fresh off the indie success of his critically acclaimed non-linear drama Memento. He attended a screening with his producer wife, Emma Thomas, and suggested that Newmarket Films, who'd distributed Memento, back Donnie Darko.

In a Collider interview, Kelly recalls: "When the lights came up, Chris and his wife both turned to the Newmarket executives, Chris Ball and Will Tyrer, and they both looked over at them and they nodded. They were like, 'You guys should distribute this."

As if we didn't have enough to thank Christopher Nolan for. With Donnie Darko now celebrating its 20th anniversary, tweet us your favourite moments from the film @Cineworld.