We've got a thrilling slate of Marvel movies to look forward to in the coming months and years. The Marvel Cinematic Universe (MCU) is about to conclude its Phase Four stage, so stay on top of what's coming with our blog list of the upcoming films in order of release.

Created by Stan Lee and Jack Kirby, African superhero Black Panther broke new ground for Marvel upon his debut in 1966. The character was the first representation of a black superhero in comic book lore, a noble prince (named T'Challa) living in the vibranium-rich country of Wakanda.

The pressure was on the 2018 movie adaptation to get everything right – after all, Black Panther has been embraced as a progressive pop culture symbol, not just a comic book figure. Fortunately, in the assured hands of Fruitvale Station and Creed director Ryan Coogler, Black Panther emerged as a stirring, spirited tribute to Lee and Kirby's creation.

Anchored by the late Chadwick Boseman's noble performance as the title character (but stolen by Michael B. Jordan as insurgent villain Killmonger), this was a Marvel movie with brains and brawn. Coogler is set to return for Black Panther: Wakanda Forever, although story details are being concealed from view – not unlike the way Wakanda treats itself.

Letitia Wright, Danai Gurira and Martin Freeman will all be back, playing Shuri, Okoye and Everett Ross, respectively. Marvel Studios president Kevin Feige has indicated that there are "ideas and a pretty solid direction on where we want to head with the second one".

In the wake of Chadwick Boseman's death in August 2020, Disney has confirmed they will not recast the role of T'Challa. Coogler says that he wants to "focus on trying to make something that has some type of meaning". Fingers crossed that our return to T'Challa's kingdom will live up to our lofty expectations and honour Boseman's memory.

What is the story of Thor: Love And Thunder?

We only know the most general details, namely, that Jane Foster from the first two Thor movies will return to lift hammer Mjolnir. She will, effectively, become the incarnation of Mighty Thor. Meanwhile, our title character has left his godly duties behind, after initially teaming up with the Guardians of the Galaxy at the close of Avengers: Endgame. Meanwhile, the new King of Asgard, Valkyrie, will be searching for a Queen to rule by her side.

Taika Waititi is back as director, having galvanised the Thor character with 2017's riotously entertaining Thor: Ragnarok.

Who stars in Thor: Love And Thunder?

Chris Hemsworth returns as Thor, alongside Natalie Portman as Jane and Tessa Thompson as Valkyrie. Former Batman Christian Bale will be playing the film's villain, Gorr the God Butcher. And Chris Pratt will be reprising his role as Star-Lord.

Hemsworth has praised the film's script: "One of the best scripts I’ve read in years. It’s Taika at his most extreme, and at his best. If the version I read is the one we get running with, it’s going to be pretty insane."

2. Doctor Strange In The Multiverse Of Madness

What is the story of Doctor Strange In The Multiverse Of Madness?

Evil Dead and Spider-Man helmer Sam Raimi directs the Doctor Strange sequel. He takes over from the first film's Scott Derrickson, who departed over "creative differences".

With its overt horror elements, it fits perfectly in Raimi's ballpark. In fact, Doctor Strange in the Multiverse of Madness picks up the multiverse thread introduced in Spider-Man: No Way Home. This means dark and ominous times for Benedict Cumberbatch's title character as he must contend with a dangerously unravelling time-space continuum.

Doctor Strange in the Multiverse of Madness introduces Patrick Stewart's Charles Xavier into the MCU. This is almost certainly anticipating the arrival of the wider X-Men collective in the MCU for the first time. There are also fleeting cameos fro multiverse alternates including John Krasinski's Mr. Fantastic and Hayley Atwell's Peggy Carter. However, these characters meet a grisly fate, so it remains to be seen if this thread will be continued in a future multiverse epic.

Who stars in Doctor Strange In The Multiverse Of Madness?

However, Strange and the rest of the Avengers were triumphantly resurrected for the final battle in Avengers: Endgame. Since then, he's posed as a reluctant mentor to Tom Holland's Spider-Man, and had to untangle the latter's mess after casting a spell to wipe everyone's collective memories of Peter Parker being Spider-Man.

The new Doctor Strange movie grapples with the ongoing aftermath of these actions. It also places Wanda Maximoff/Scarlet Witch (Elizabeth Olsen) front and centre as she seeks her own measure of redemption following the events of WandaVision.

The possibilities of the multiverse also result in the introduction of the dimension-spanning character America Chavez (Xochitl Gomez).

What is the story of Black Widow?

In between the events of Captain America: Civil War and Avengers: Infinity War, Avengers team member Natasha Romanoff takes a journey back into her past. She returns to Soviet Russia to confront her own history, the history that turned her into a feared and deadly assassin.

She then comes face to face with the deadly Taskmaster, who can imitate the abilities of all those around him. Taskmaster is training a squadron of assassins within the mysterious 'Red Room', with which Natasha is familiar. She must team up with her extended family to take Taskmaster down. The director is Cate Shortland, who helmed the claustrophobic thriller Berlin Syndrome, starring Teresa Palmer.

Who stars in Black Widow?

Scarlett Johansson reprises her role as Black Widow/Natasha Romanoff, in an origin story that takes us back to the time before her death in Avengers: Endgame.

4. Shang-Chi And The Legend Of The Ten Rings

What is the story of Shang-Chi And The Legend Of The Ten Rings?

Again unknown, but Shang-Chi will make MCU history by being the first movie in the series to be centred on an Asian character. The titular Shang-Chi is a revered martial artist, proficient in numerous fighting styles and also adept with weaponry.

The film re-introduces the character of the dreaded Mandarin, previously portrayed (to controversial effect) by Ben Kingsley in 2013's Iron Man 3. The latter was controversially introduced as fake Mandarin actor Trevor Slattery, and makes a scene-stealing appearance in Shang-Chi when he helps guide our hero towards his ultimate goal.

Who stars in Shang-Chi And The Legend Of The Ten Rings?

What is the story of Eternals?

Eternals centres on the eponymous beings, a group of all-powerful, humanoid aliens created by an ancient race known as the Celestials.

The movie spans over 7,000 years, and introduce the war between the Eternals and their enemies, the Deviants. The film is directed by Chloe Zhao, who scored an Oscar-winning hit in 2021 with Nomadland.

Who stars in Eternals?

Meanwhile, Game Of Thrones' Kit Harington plays human character Dane Whitman who, judging from the Eternals post-credits scene, is set to play an important role in the MCU moving forward.

What is the story of Spider-Man: No Way Home?

Tom Holland returns as Peter Parker in his third Marvel Cinematic Universe (MCU) solo movie, and director Jon Watts is back behind the camera. It's continues the shock developments of the 2019 blockbuster Far From Home, in which Spidey's identity was exposed to the wider world.

Spider-Man: No Way home has made MCU history as the first-ever live-action multiverse movie, the possibilities of which are set in motion by Doctor Strange (Benedict Cumberbatch). The highly emotional multiverse union between Holland and ex-Spider-Man Tobey Maguire and Andrew Garfield united audiences in nostalgic celebration. It has since become one of the most successful superhero movies ever made at the box office, grossing more than $1.8 billion worldwide.

Who stars in Spider-Man: No Way Home?

What movies fall under Phase Five of the Marvel Cinematic Universe?

Click here to discover the Marvel Phase Five movies on their way to Cineworld.

Has Marvel Phase Six been confirmed?

Which Marvel Phase 4 movie are you most excited about seeing? Let us know @Cineworld. 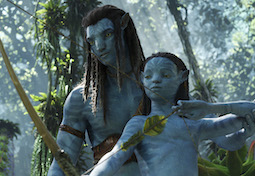 Watch the new trailer for Avatar: The Way of Water