Home Cineworld Blog Mulan: 5 massive changes you can expect to see in the Disney reboot

Mulan: 5 massive changes you can expect to see in the Disney reboot

Disney enjoyed a record-breaking year in 2019 with Frozen II, The Lion King and Toy Story 4 each earning over $1 billon worldwide. And the gargantuan Avengers: Endgame became the most successful movie of all time, overtaking Avatar with global returns of more than $2.7 billion.

And the all-conquering studio are kicking off the new decade with their new live-action reboot of Mulan, arriving on the 24th of July.

Disney have undertaken several reboots of their classic animated properties in recent years. Besides the aforementioned The Lion King, they’ve also put new twists on Beauty and the Beast, Aladdin and The Jungle Book. However, while these new visions of timeless tales still follow the same general premise, they often depart from their predecessors in significant ways.

And that leads us to Mulan, poised to be the most radical Disney remake so far. The new movie still follows the premise of the 1998 animated classic: a young Chinese woman disguises herself as a man to take her father’s place in the army. But this rendition of the story goes in bold new directions from the Oscar-nominated animation.

Here are five massive changes you can expect to see in Mulan when it hits the big screen.

The 1998 original contained several fan favourite songs, including ‘Reflection’ and ‘I’ll Make A Man Out Of You’. So, it’s a surprise to learn that the remake, directed by Whale Rider filmmaker Niki Caro, isn’t a musical; this follows the approach of The Jungle Book and Dumbo. However, the classic tunes may be heard as sweeping orchestral versions, with the trailer giving us a taste of the two aforementioned favourites.

While Mulan may not be a full-blown musical, it’s set to lean heavily into the Chinese ‘wuxia’ film – essentially a blend of martial arts and fantasy. Therefore, the new Mulan will surely be bursting with enough spectacular and stylised action to establish its own place in the hearts of fans.

One can’t have a Disney movie without a sidekick, right? In the original Mulan, our courageous hero (voiced by Ming Na) was accompanied by a fast-talking dragon named Mushu (Eddie Murphy) who was tasked with keeping Mulan safe. With his fiery personality and knack for hatching comical schemes, this little dragon was an integral and beloved part of the original film.

However, don’t expect to see him appear in the live-action film as the character has been cut. Although Murphy was reportedly offered the chance to reprise the role, there is no official word on why the beloved character has been scrapped. While some online rumours suggest it has to do with a backlash against the character in China, it’s more likely that a comical talking dragon just won’t fit the tone of the new film.

Mushu isn’t the only character to be axed from the new version. The dashing Li Shang has also been removed. In the original 1998 movie, he was the captain of the Chinese army (voiced by B.D. Wong) who formed a romantic attachment to Mulan, although, refreshingly, she was not at all reliant on him to save the day.

This time round, Shang’s role has been split into two. Firstly, we have Commander Tung (Ip Man star and martial arts icon Donnie Yen) who’s described as being a mentor figure to Mulan. He’s set to train her and her comrades (including returning characters Ling, Yao, and Chien-Po) as they seek to become fearsome warriors. Then there’s Chen Honghui (Mortal Engines’ Yoson An), a fellow soldier under Tung’s command who’ll take the place of Mulan’s love interest.

It’s unclear how these new characters will influence the narrative or whether Honghui will be as good a match for Mulan as Shang was. But we can’t wait to find out and see if the extra characters can provide more depth to Mulan’s journey.

4. There are two new villains

Hun leader Shan-Yu (Robocop's Miguel Ferrer) has also been replaced. Although possessed of a piercing gaze and imposing presence, this villain barely had any screen time in the original. To make up for this underused villain, the remake will be giving us two brand new antagonists.

Jason Scott Lee (Dragon: The Bruce Lee Story) will play Bori Khan, a bloodthirsty leader of the Hun army seeking to avenge his father’s death. Another new addition to the film is shapeshifting witch Xiang Lang, played by Memoirs of a Geisha’s Gong Li. The character’s magical yet malevolent presence will likely fuel the mystical and fantastical side of the film, while increasing the sense of threat.

We don’t know much more about these characters, but we can’t wait to see them face off against Mulan this March.

5. Mulan now has a sister

Mulan’s family has grown in this modern retelling. Whereas in the original Mulan was an only child (save for her dog named Little Brother), in the remake she has a younger sister named Hua Xiu. She’s played by newcomer Xana Tang, although we’re not sure how the Kiwi-born actor’s role will influence the course of the new film.

However, the themes of family are integral to the story of Mulan, in both its animated and live-action forms, so we expect she’ll play a significant role. Other new characters joining the ranks include con artist duo Skatch (Utkarsh Ambudkar) and Ramtish (Chum Ehelepola), and Sergeant Qiang (Ron Yuan), the second in command under Commander Tung.

Mulan is released on the 24th of July. Excited? Let us know @Cineworld. 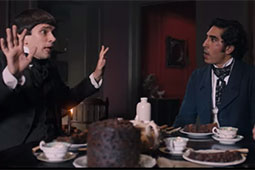 BBC Children in Need previews of David Copperfield at Cineworld