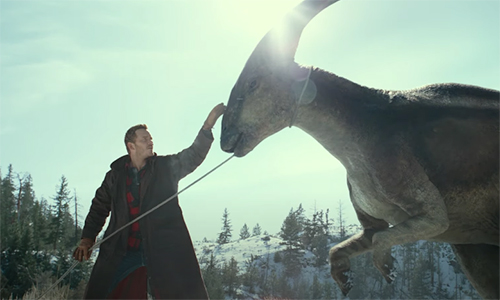 Life finds a way in the spectacular new trailer for Jurassic World: Dominion. The series, itself spun off from the Jurassic Park timeline, is set to come to an end by re-establishing a host of fan-favorite characters and one scary new dinosaur.

Said carnivore is the gigantosaurus, or 'giga' for short. You'd think that these InGen scientists would have learned from their past cloning experiments, not to mention that continental America is now overrun by our prehistoric ancestors.

Chris Pratt and Bryce Dallas Howard both return as Owen and Claire, the reluctant dinosaur wranglers who have a front-row seat to a new stage in dino evolution. But the biggest cheers are reserved for the return of the original Jurassic Park trio of Sam Neill, Laura Dern and Jeff Goldblum, playing Alan Grant, Ellie Satler and Ian Malcolm, respectively.

Director Colin Trevorrow is back, having sat out 2018's Fallen Kingdom. Teasing set-pieces including a velociraptor versus motorbike pursuit, this new movie takes the notion of a Jurassic World to a new level.

Plus, hero raptor Blue, familiar from the previous two movies, now has a child of her own, which is subject to the usual sinister scientific kidnap and conspiracy. Check out the trailer below.