It wouldn't be awards season without a little bit of controversy here and there. And, true to form, the 2020 Oscar nominations have generated as much attention for what they've left out as for what they've included.

While the likes of Joker and Jojo Rabbit are celebrating (the former is now the most-nominated comic book movie of all time with 11 nods), there are several other movies, actors and filmmakers that have been left licking their wounds.

Here are the surprise omissions from this year's Oscar nominations...

First up, the one that's really upset a lot of people, including the film's stars. Gerwig's adaptation of Louisa May Alcott's novel has been celebrated for the way it splices the timeline, leaping back and forth between the older and younger incarnations of the March sisters.

Rather than descend into incoherence, this draws out the latent themes of the story, particularly the brewing rivalry between siblings Jo and Amy (Saoirse Ronan and Florence Pugh, both deservedly nominated).

Gerwig's faithful yet bold handling of the story, both traditional yet infused with contemporary zest, should surely have made her a lock for Best Director. After all, putting a fresh spin on a novel that's been adapted countless times before is no mean feat. Sadly, it wasn't to be.

Even so, we can hope that her nomination for Best Adapted Screenplay will be converted into a win, even if Best Picture is a tougher fight. (The latter category includes the likes of Joker, The Irishman, Parasite and Once Upon a Time in Hollywood.)

2. Lupita Nyong'o for Us

2020 will be remembered as the year of dual nominations for Scarlett Johansson (Marriage Story and Jojo Rabbit), but none for what was arguably the year's best performance.

Lupita Nyong'o gives us two fully rounded characters for the price of one in Us, differentiating them through marvellous physical touches that are both overt and subtle. Although she gets to chew on plenty of meaty Jordan Peele dialogue, this is a performance that owes more to the movement of classic silent cinema stars, conveying more with a glance or a gesture than a rambling monologue could ever do.

Nyong'o's absence is especially disappointing when one considers the attention foisted on Peele's Get Out a couple of years ago. That movie was released in the midst of the #OscarsSoWhite campaign, and a combination of that controversy and the film's inherent strengths powered it to victory. This included a Best Original Screenplay win (the first ever awarded to an African-American filmmaker), a Best Picture nod and a Best Actor nomination for Daniel Kaluuya.

So what gives? Is it a case that the Oscar voters went through their Jordan Peele phase and now they've moved on? Either way, Nyong'o's performance stands as a fabulous achievement.

3. Lulu Wang, Awkwafina and Zhao Shuzhen for The Farewell

Released last September, The Farewell is a sublimely sensitive story of a family split by a simple culture clash. It's the second feature film from Chinese-American writer-director Lulu Wang, who draws on her own memories of how her family lied to their grandmother to conceal a terminal diagnosis.

In the wrong hands, this could have been a queasy and uncomfortable experience. But thanks to Wang's determinedly non-sentimental approach, it is instead an honest look at how Chinese families absorb guilt and lies in a different way to Americans.

Much of the film's success rests on an introverted and moving performance from the usually extroverted Awkwafina, often more famous for her comic roles. She won the Golden Globe and it was expected that she, and indeed Wang, would be recipients of Oscar nominations, not to mention the terrific Zhao Shuzhen as grandmother Nai Nai. Unfortunately, they all gave way to the competition, although we can still celebrate South Korea's first nominations for Best Picture and Best International Picture for Parasite.

Here's another shocker: the absence of Jennifer Lopez for her role in tough-talking, pole-dancing drama Hustlers. When the movie was released, Lopez's performance was acclaimed as a career best: tenacious, gritty and never asking for easy sympathy. The achievement was all the more profound considering it had been a long while since we'd seen a Lopez performance of any substance (in all honesty, that was probably 1998's Out of Sight, co-starring George Clooney).

The omission of Lopez in both the Best Actress and Best Supporting Actress fields (the latter was perhaps more likely) is a missed opportunity for the Academy to recognise a sensational comeback performance.

Like Awkwafina, Taron Egerton walked away with the Golden Globe but, sadly, no Oscar nomination. The rising British star sings, dances and performs a wholesale physical transformation in Rocketman, in which he portrays troubled British pop supremo Elton John.

The film scrambles the timeline of John's achievements, applying certain songs to unrelated contexts to craft a fantastical, rather than plausible, depiction of the singer's life. It is, however, Egerton's believable performance that grounds us, particularly during the uglier, more turbulent years when John's hard-earned success turns him away from those who helped him achieve it, including Bernie Taupin (Jamie Bell).

Just as Lupita Nyong'o's physical acting in Us was overlooked, so too has Egerton's command of body language and vocal range. If we were hoping for another Rami Malek/Bohemian Rhapsody-style breakout success, this wasn't it.

6. Daniel Craig for Knives Out

Now, this was perhaps hoping for too much. This year's Best Actor field is a fiercely competitive one, and dominated by Joaquin Phoenix's mercurial performance as Joker. (The latter's nomination is perhaps the least surprising of this year's batch, and it's looking increasingly likely he will win.) When pitted against the so-called 'dramatic' contenders like Phoenix, Daniel Craig's relatively breezy performance in Knives Out might, mistakenly, have been perceived by Oscar voters as less deserving.

If so, that's a poor reason to exclude one of 2019's most entertaining turns. In the form of wry detective Benoit Blanc, Craig fashions a character who hoodwinks both the film's cast of suspects and us the audience, seemingly on the backfoot with his "CSI, KFC" accent, but who is in fact one step ahead at every turn. The thrilling final summation in which Blanc reveals the culprit requires expert, precision-tooled dialogue delivery from Craig, portraying a character who both relishes the experience and wants to see justice done.

Knives Out, for all its critical acclaim, walked away with just one nomination: Best Original Screenplay for Rian Johnson. Was it asking too much for Craig, or equally brilliant co-star Ana de Armas, to be recognised as well?

Finally, we get to the Best Original Score Oscar, and it's as closely fought as every other category. In truth, we can expect it to go to Hildur Gudnadottir for Joker – she's got the Golden Globe and a host of positive publicity on her side. That said, composer Thomas Newman has picked up his 15th nomination for Sam Mendes war drama 1917, and veteran John Williams signs off from Star Wars: The Rise of Skywalker with another nod. (With 52 in total, he's the second most-nominated individual in Oscars history, following Walt Disney.)

However, was it too much to acknowledge Alan Silvestri's superb work on Marvel movie Avengers: Endgame? In 2019, the Oscars awarded the first-ever Best Original Score prize to a comic book movie, Marvel's Black Panther, and it was, perhaps prematurely, perceived as a sea change in the industry.

Were the Oscars committed to this train of thought, they surely would have acknowledged Silvestri's mammoth interweaving of musical themes, all cathartically paying off as we reached a pivotal milestone in the franchise's history. Tony Stark's funeral scene alone is one of the best-scored sequences from a movie in 2019, yet not even that was enough to carry Silvestri's work over the line. Still, both the movie and the score will endure, with or without Oscars.

8. The entire cast and crew of Waves

Here's an underdog movie that deserved a lot more love from the Academy Awards. Waves is released in Cineworld on the 17th of January, and focuses on an African-American family in Florida who are steadily pulled apart by tragedy. The movie is directed by Trey Edward Shults in a bold, invigorating blast of colour, energy and overlapping musical genres, before carefully subsiding to leave us contemplating on themes of grief, despair and redemption.

The movie's technical aspects are more than worthy of serious awards attention, and the performances are superb, not least from Kelvin Harrison Jr. as troubled teenager Tyler.

Which movies did you want to see nominated at the 2020 Oscars? Let us know @Cineworld. The 92nd Academy Awards gets underway on the 9th of February. 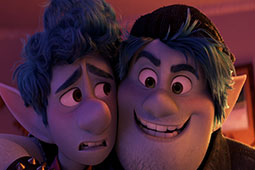