We chatted exclusively to Howard about the film's inception, what attracted him to the script and his feelings about F1. Hold on tight!

How did Rush come about?

“Peter Morgan and I did Frost/Nixon together and we became friends. I heard he’d written this script about the rivalry between James Hunt and Niki Lauda and was immediately envious that it could wind up going to someone else. He’d really just written it on spec, so I told him I was interested in reading it and left it at that. And then when I had my chance at it, it didn’t take me very long to say yes.”

What made you want to direct this film?

“It was the characters – the dynamic between James and Niki. The period was also very interesting because things really have changed since then and while that’s not central to our story, it certainly does have a real influence on the flavour of the movie."

How much do you know about Formula 1 now?

“I’ve learned quite a bit about the sport. I’m still learning, but I suppose I’ve mostly learnt how to ask the right questions. That said, I probably knew a lot more about Formula 1 going into this movie than I did about going to the moon before Apollo 13!

What made you choose Chris to play James Hunt?

“Honestly, he auditioned for it and was dazzling. Physically he’s right and I spoke to people who had worked with him and who were very complementary of his talent and his potential. Just from this little audition tape you could see that he had a relaxed, athletic, cool masculinity.

Has this got you in the mood for Rush? Watch the trailer below and share your thoughts on the eagerly awaited racing drama. Rush is released on 13 September. 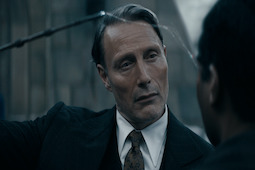 Grindelwald: everything you need to know about Fantastic Beasts villain