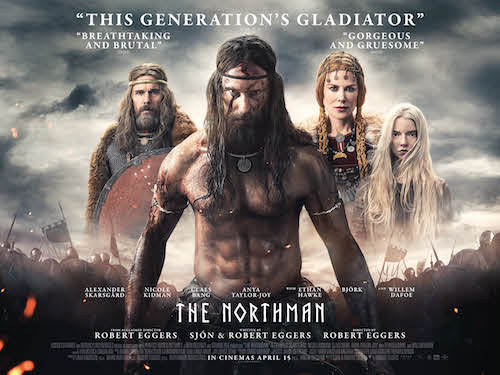 The verdict is in: director Robert Eggers' Viking movie The Northman is a no-holds-barred historical extravaganza. Replete with memorable performances, gory set-pieces and a commitment to 8th-century reality, critics say the movie grips like a vice.

The story centres on Amleth, the Norse prince who, as a boy, is betrayed by his uncle Fjolnir (Claes Bang). When the latter murders Amleth's father (Ethan Hawke), kidnaps his mother (Nicole Kidman) and seizes the kingdom for himself, it sets in motion a path of vengeance forged by the older Amleth (Alexander Skarsgard).

Eggers draws on the very period texts that allegedly inspired the creation of William Shakespeare's Hamlet. Hollywood cheese, this ain't – The Northman is bathed in blood and phantasmagorical visions that very much earmark this as a product of Eggers' mind.

The filmmaker has, in the past, seized our attention with the critically acclaimed psychological horror films The Witch and The Lighthouse. Here are a selection of scenes from both movies that will adequately prepare you for the full-on experience that is The Northman.

WARNING: VIOLENT AND DISTURBING SCENES AHEAD

Young actor Harvey Scrimshaw is alarmingly convincing as the afflicted Caleb in this eerie sequence from Eggers' breakout movie. The film focuses on a 17th-century puritanical family that comes to believe it is under the influence of a malign presence.

The evidence appears to stack up in this sequence as Caleb, who has seemingly been seduced and discarded by the eponymous witch, appears to invoke a heavenly power to save his own soul from damnation.

The period-authentic dialogue, not to mention the exact attention to detail in the costumes and production design, create a sense of verisimilitude and accuracy, further immersing us in this world of heretical mania and apparent supernatural occurrences.

Little wonder The Witch was so acclaimed: there's a deep-seated sense of conviction running through the heart of the movie that elevates it far above and beyond your standard demonic chiller.

The Witch acted as a showcase for breakout actor Anya Taylor-Joy, here marking her first collaboration with Eggers.

She is superb as Thomasin, the eldest child of the apparently persecuted family whose imminent entry into adolescence and adulthood may well be calling down evil upon her own family.

The domestic psychodrama of The Witch is what gives the film its edge, as Thomasin's mother (the excellent Kate Dickie) allows her superstitions to get the better of her, in the process accusing her own child of witchcraft.

There is a nice sense of dark, delicious irony come the end of the movie. Her family now all dead, Thomasin's apparent liberation from dogmatic mania coincides with her entry into a coven of witches.

Or does it? Nothing in Eggers' brilliantly ambiguous movie can be taken at face value. But it is certainly true that Thomasin believes she is destined for greater things, regardless of whether these occurrences have an actual physical grounding.

The climactic conversation with the transformed Black Philip, the demonic goat turned Satanic manipulator, is a masterclass in eerie disquiet. The hushed tones of the dialogue better emphasise Eggers' research into the period's vocal idioms, and it demonstrates that an uncanny sense of atmosphere is always more effective than gratuitous gore or cheap jump scares.

It's remarkable how much Eggers' second movie The Lighthouse anticipated the lockdown conditions during the pandemic. A crazed, darkly humourous mash-up of Nosferatu, The Shining, and Steptoe and Son, the film throws Willem Dafoe and Robert Pattinson against one another as warring 19th-century lighthouse keepers.

Dafoe's seasoned sea salt Thomas Wake dynamically contrasts with Pattinson's ambiguous young loner Ephraim Winslow. The clash of accents and ideologies is but one part of the film's rich tapestry as Eggers and cinematographer Jarin Blaschke cloak the movie in chiaroscuro atmosphere and a narrow aspect ratio to evoke the feel of classic horror-thrillers from cinema's nascent period.

The movie also has a very funny, absurdist edge to it as the two men steadily go mad together. The transition from a wounded Wake moaning about Winslow's hatred of his cooking into a full-bore invocation of the sea gods is ridiculous and alarming by turns, hinging on Dafoe's remarkably powerful delivery.

What's a man to do when he's cohabiting with an ex-sailor in an isolated, wind-battered lighthouse? The answer is of the perverted, phantasmagorical variety as the increasingly fractured Winslow begins to lose his grip on his own sanity.

As with The Witch, Eggers is too skilled to spell everything out in a literal manner. What matters is that we end up feeling as discombobulated and repelled as Winslow is, a fine example of how visual texture and careful period research can bring to life the paranoias of a bygone age.

One of the key aspects is the fluctuation in his accent, which one may put down to inconsistency in Pattinson's actor. However, it is more likely a deliberate ploy as Winslow begins to doubt his own identity, which is further spurred on by Wake's observations.

Are Winslow and Wake the same person? Does this account for how the former's vocal inflections morph at will? Once again, Eggers realises that it's a lot more compelling, and a lot more fun, to leave us guessing.

Indeed, by the end of the movie, we find ourselves as scrambled as the characters themselves, the film having brilliantly assimilated a sense of cabin fever as related to the superstitions of the time.

Will The Northman measure up to the menacing atmosphere of Eggers' previous movies? Find out when the movie hits Cineworld screens on April 15th. 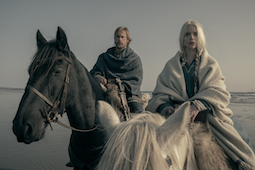