Spike Lee movies: 8 essential 'joints' that you need to watch

In Lee's usual confrontational style, it tackles issues of racial injustice head-on. Black Panther's Chadwick Boseman stars as a Vietnam war veteran who returns to the country in search of hidden treasure. American foreign policy and the stench of entrenched racism meet the framework of a thriller in the latest movie from one of our boldest directors.

To mark the release of Da 5 Bloods, here's our blog list of Lee's eigh greatest movies so far.

Lee's breakout movie cemented his signature style, one pulsating with energy and brimming with impassioned anger about the state of racial politics in America. This story of one woman and the three men in her life defies its low budget via the conviction of the acting and the insight of Lee's witty screenplay.

In what would become another signature move, the director also cast himself in a supporting role. Interestingly, in 2018, Lee adapted his feature film debut as a Netflix series, to acclaimed effect.

Widely considered the director's masterpiece, Do the Right Thing consolidates everything that is great about Lee's cinema. It's a fiercely driven story, focusing on the slowly broiling racial tension that comes to a head during one sweltering Brooklyn day, drawing power from its fine ensemble cast and refusal to cast judgement on its various African-American and Italian-American factions.

Rivalling Do the Right Thing for sweep and ambition is Lee's account of the iconic Civil Rights activist, and, admirably, it doesn't shy away from the often contentious nature of X's politics. A lot of that is down to the presence of regular Lee collaborator Denzel Washington, always an actor adept at finding humanity in the most complicated of individuals.

Tracing X's life from his early days to his conversion to Islam and eventual assassination, it's hard not to get swept up in the account of a man whose personal story is bound up with that of America itself.

One of Lee's lesser-known films is, atypically, a lovely and tender insight into the life of a black Brooklyn family in the 1970s. The director leaves the anger and explosive violence at home to trace an autobiographical account of growing up in the city, insight no doubt gleaned from the fact he co-wrote the script with his sisters.

With an excellent soundtrack of soul and funk classics, the movie also features superb performances from Alfre Woodward and Delroy Lindo as the parents, although the show is quietly stolen by young Zelda Harris, through whose eyes the story unfolds.

An overlooked strand of Lee's career is his documentary filmmaking – in fact, the discipline required in this particular realm often focuses him to a greater degree than his dramatised projects. One of his most searing films is this account of the 15th September 1963 murder of four African-American girls, which occurred during the 16th Street Baptist Church bombing in Birmingham, Alabama.

Lee's characteristic rage is the all-the-more palpable by virtue of this being ripped from the pages of history, a movie that acts as a lament for race-riven America.

Post 9/11, the world of cinema found itself in something of a daze as filmmakers scrambled to make sense of the appalling terrorist attack. One of the finest offerings was Lee's ferociously angry drama, in which a superb Edward Norton stars as a man enjoying his last 24 hours before going to prison for seven years.

Along the way, his odyssey exposes the contradictions and tensions inherent in the Big Apple, with a scene-stealing onslaught of supporting performances including Philip Seymour Hoffman, Rosario Dawson and Anna Paquin.

Lee's standing as a chronicler of contemporary black American life hit the mark again with this powerful look at the impact of Hurricane Katrina. The 2005 disaster hit the black community of New Orleans particularly hard, and Lee's obvious contempt and anger about how the aftermath was handled courses through this Emmy-winning documentary.

It's one of his most personal and affecting movies, not least because it involves the family of his regular composer Terence Blanchard, whom we see returning to their flooded home.

After several years of underachieving films, Spike Lee roared back into the public consciousness with this scabrous thriller, based on a true story. John David Washington (soon to appear in Christopher Nolan's Tenet) gives a breakout performance as Ron Stallworth, the first-ever African-American detective in the Colorado Springs police department.

He makes a name for himself by posing, over the phone, as a white member of the Ku Klux Klan. That means that Stallworth's partner, Flip Zimmerman (an Oscar-nominated Adam Driver) must pose as him in person. Both uproariously funny and uncomfortably topical, the film criss-crosses the buddy movie with a withering examination of the entrenched nature of American racism. The film was a critical and box office hit, and won Lee his first Oscar, for Best Adapted Screenplay. 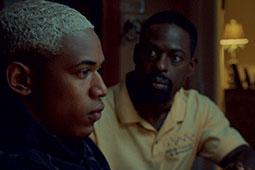