Home Cineworld Blog Star Wars: The Rise of Skywalker – 10 times John Williams ensures the Force is with us

Veteran composer John Williams is in the Oscar race again this year for his ninth and final Star Wars score, The Rise of Skywalker. Williams is synonymous with the sound of the franchise, having been there since its inception with 1977's A New Hope. And the plethora of location and character-specific themes penned by the composer in the last 40 years is nothing short of astonishing, surely comparable to Wagner's Rings Cycle in its achievement.

It remains to be seen whether Williams will convert his nomination for The Rise of Skywalker into a win. Maybe the Oscar voters will give it to him on the basis of nostalgia, recognising his sheer body of work within the Star Wars saga? Or maybe they'll give it to one of the competition?

Also in the running this year is Thomas Newman, a perpetual Oscar bridesmaid with 15 nominations but no wins to his name. He's recognised for his alternately brooding and inspiring score for World War I drama 1917, and is surely Williams' closest competition. That said, we must also recognise Hildur Gudnadottir for her despairing Joker score – she already won the Golden Globe, and an Oscar may very well be in sight.

While we await the 92nd Academy Awards ceremony on the 9th of February, here are 10 thrilling tracks from the score for The Rise of Skywalker, tracks that ensure the Force is with us – always.

Pounding percussion accompanies Kylo Ren's (Adam Driver) journey to the far-reaches of the galaxy. This is where the evil Palpatine (Ian McDiarmid) has been hatching his evil plan, and it allows Williams to showcase the threatening tri-tone of Ren's theme. The alternating timpani and trombones establish a foreboding yet thrilling atmosphere, immediately pulling us into the fight to end them all. And those subtle iterations of Palpatine's theme from Return of the Jedi, not to mention Darth Vader's Imperial March, are brilliantly done.

2. The Rise of Skywalker

Already, we've mentioned three Williams themes present within the fabric of The Rise of Skywalker. Given the multitude of ideas he has to incorporate, it's perhaps understandable that only a couple of new themes are crafted for the latest movie. But what themes they are. The main one is a beautifully stirring, noble piece that could mean any number of things – it may symbolise unity between the film's valiant heroes. Or it may well be Williams' triumphant summation of his work on the franchise as a whole. Either way, 'The Rise of Skywalker' is another stirring piece from a composer who has long specialised in them.

Here's an album cue that's very different to the presentation of music in the movie. As Rey, Finn (John Boyega), Poe (Oscar Isaac), Chewbacca (Joonas Suotamo) and C-3PO (Anthony Daniels) are pursued on the desert planet of Pasaana, Williams unleashes one his characteristic action tracks. Whereas the music in the film gets somewhat drowned out by the sound of jet packs and blasters, as a separate listening experience, it's propelled by a joyous little theme that alternates between trumpets and horns. One senses Williams is celebrating the collective unity of our central ensemble, who in this film are working together, rather than being dispersed to all corners of the galaxy as in The Last Jedi.

The other primary theme in the movie is a vocal corruption of Rey's delicate theme. Williams underscores the key battle between the light and dark sides of the Force, allowing, via his music, emotional insight into her conflict. The Star Wars saga has often used choir to add mystique, for both awe-inspiring and menacing purposes, and the sweep of this piece joins the classic tracks from the saga. And Williams' interlinking of his own musical heritage is, as always, magnificent: listen out for statements of The Imperial March and Duel of the Fates (from The Phantom Menace) contained therein.

5. Destiny of a Jedi

It's back to a more optimistic tone in this attractive track, which places Rey's theme front and centre as her mission gets underway. Past and present collide as the beautifully melancholy theme for Leia (Carrie Fisher) melds with that for Rey, showing how the Star Wars veteran continues to be a guiding moral compass in the franchise. And that sense of legacy only heightens with the reprise of Yoda's theme from The Empire Strikes Back (one of Williams' personal favourites), another sign of how past Jedi masters continue to live on in Rey herself.

The latent menace of the 'Imperial March' is again present in the scene on the wrecked Death Star, located on the wave-lashed planet of Kef Bir. The ghosts of the past are continually encroaching on Rey's present day quest, and Williams has us questioning whether she will indeed succumb to the dark side of the Force. Within the movie, we hear the same sombre reprise of the 'Imperial March' present during Darth Vader's death scene in Return of the Jedi; sadly, it's absent from the soundtrack album.

Another of Williams' strengths is his ability to spot a scene; spotting refers to the points where music enters and exits a sequence, where it's present, and where it's absent. In collaboration with writer-director J.J. Abrams, Williams leaves the first half of Rey and Kylo Ren's Kef Bir duel unscored – all the better to feel the impact of the pounding waves and the swish of their lightsabers. This, in turn, heightens the impact of the music when it does finally appear, with the heartwrenching reprise of both the Force theme and Leia's theme bidding farewell to a Star Wars icon. It's another profound example of how Williams not only scores the films but invests us fully in the fate of each character.

8. The Force Is With You

Williams' music steps up a notch during the final battle on Exegol. Everything centres around Rey's physical and psychological battle with the cackling Palpatine, and with the fate of the entire galaxy at stake, the Force theme takes centre stage. During the point when Rey is seemingly out for the count, only to be greeted by the voices of old Jedi masters, Williams' music takes on a magical, crystalline sheen, practically shimmering with hope as choir and piano indicate her underlying Force abilities. And that rapturous climax is a pitch-perfect musical depiction of good conquering evil.

The Star Wars franchise, even during its weaker moments, has always been underpinned by a devotion to character. Much of that emotional impact can be credited to Williams, whose ability to introduce, reinstate and morph individual character themes is nothing less than miraculous. At the end of the score for The Rise of Skywalker, everything comes full circle, back to where we started in The Force Awakens, with gorgeous closing statements of Rey's theme, as she buries the lightsaber on Tattooine, before one final reprise of 'Binary Sunset' from A New Hope. For a soundtrack so full of bold and brash moments, it's perhaps these understated, heartfelt interludes of humility and homeliness that speak to us the most, allowing us to relate to those in a galaxy far, far away.

This track is where it finally sinks in: this is the final Star Wars end credits piece we'll hear from Williams. A monumental sense of history therefore underpins the 'Finale' cue from The Rise of Skywalker, which in the manner of all the past Star Wars scores, wraps up a mammoth amount of themes in one spine-tingling package. The composer first achieved this in 1977, and now he resolves his achievement, with one final crescendo that likely leaves even the most casual of fans teary-eyed.

Has our list made you want to watch the movie again, and to hear the music in context? Then click here to book your tickets for Star Wars: The Rise of Skywalker.

Let us know @Cineworld if you think John Williams will walk away with the Oscar for his score. 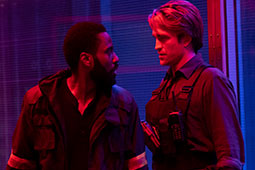 Why Christopher Nolan’s Tenet could be this decade’s Inception