Normality may have been disrupted in 2021, but the annual American Super Bowl continues to run like clockwork. And, as per Super Bowl tradition, we've got a glut of new movie trailers has dropped for your viewing pleasure. Scroll down to check out the exciting previews of major upcoming releases.

(Note: the dates in the following trailers pertain to the USA. Be sure to check out our list of UK and Ireland movie release dates.)

The Sixth Sense and Split filmmaker M. Night Shyamalan returns with another high-concept thriller. The Motorcycle Diaries star Gael Garcia Bernal plays a father whose family falls victim to a mysterious ageing disease while vacationing on a luxury beach.

Coming hot on the heels of Shyamalan's Glass, the spiritual sequel to his moody comic book drama Unbreakable, this sounds like traditional territory for the director. What will the twist be this time? It's based on the graphic novel 'Sandcastle' by Pierre Oscar Levy and Frederik Peeters, so no spoilers from those who've read it. The supporting cast includes Vicky Krieps (Phantom Thread) and Thomasin McKenzie (Jojo Rabbit).

There's no time to pump the brakes on the Fast & Furious franchise just yet. Following 2019's spin-off movie Hobbs & Shaw, we now reorient ourselves around Vin Diesel's beefy carjacker Dominic Toretto and his crew (sorry, "family").

In Fast & Furious 9, Dom must confront his long-lost brother Jakob (Bumblebee's John Cena), which acts as the cue for all kinds of insane-looking set-pieces. It promises to be a rogue's gallery of familiar faces with Tyrese Gibson, Ludacris, Michelle Rodriguez, Jordana Brewster, Charlie Theron and Helen Mirren all featuring. Just don't go expecting Dwayne Johnson to turn up – it appears that the infamous feud he shared with Vin Diesel on the set of Fast & Furious 8 has had a lasting effect. And, in case you hadn't heard, Fast & Furious 10 is on the way soon.

3. Raya and the Last Dragon

Walt Disney Animation Studios presents its first original story since 2016 blockbuster Moana: Raya and the Last Dragon, a stirring fantasy-adventure exploring the relationship between humans and dragons. Star Wars actor Kelly Marie Tran voices brave warrior Raya who must seek out firebreather Sisu, the last dragon, to re-establish harmony between the different species. Should she fail, Raya's kingdom of Kumandra will fall into war.

Promising eye-popping animation and classic scene-stealing Disney supporting characters (we're besotted with baby con-artist Little Noi), we can surely expect great things. Completing the package is the presence of Crazy Rich Asians' Awkwafina who brings her comic chops to the role of the fabled Sisu.

Never Call Saul and Breaking Bad's Bob Odenkirk is in over his head in this blackly comic crime thriller. Odenkirk plays Hutch, a seemingly mundane family man who, after failing to respond to his home being burgled, taps into ferocious reserves of violence. It's written by John Wick scriber Derek Kolstad, and the eclectic supporting cast includes rapper The RZA and Back to the Future's Christopher Lloyd.

Which of these upcoming movie titles is getting you amped? Let us know @Cineworld. 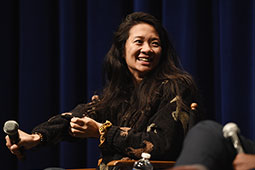