Home Cineworld Blog The Batman: what we learned from Robert Pattinson and the rest of the film's stars 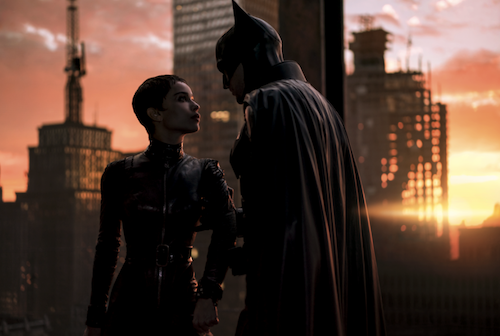 The Batman arrives in Cineworld this Friday (4th March) and promises to sweep you up in a richly Gothic superhero odyssey. The DC movie stars Robert Pattinson as Bruce Wayne, here restored to his comic book mantle as the world's greatest detective. Working the beat on the corrupt and scuzzy streets of Gotham City, Wayne, now in his second year as Batman, finds himself on the trail of an elusive serial killer named The Riddler (Paul Dano), who has disturbing plans to bring the Gotham elite to its knees.

The movie is directed by Matt Reeves who spun atmospheric wonders from Cloverfield and the last two of the recent Planet of the Apes movies. Zoe Kravitz is Catwoman, Jeffrey Wright is Jim Gordon, Colin Farrell is The Penguin and Andy Serkis is Alfred in this all-star, moody reinvention of the Batman template. (Click here to discover the reviews for The Batman.)

We were lucky enough to attend the recent press conference in which Pattinson and several more of the movie's main stars held forth. Scroll down to discover the highlights, including Pattinson's interpretation of the Batman character, Dano's unexpected inspirations to get into The Riddler's mindset and a lot more.

1. Robert Pattinson on... the movie's reinvention of Bruce Wayne

"The first time I read the script, it seemed like a radical departure from the usual depiction of Bruce as a society playboy. Usually, he's very much in control of the three aspects of his personality, as in, Bruce Wayne the playboy, then the Bruce at home, and then the Batman. But in this movie, Bruce has let his Bruce persona wither, almost. Since the death of his parents, he hasn't worked on himself at all.

"The only way Bruce can survive is via this alter-ego, which he wants to live inside more and more. He doesn't have an enormous amount of control over what's happening to him. When he puts that suit on, he genuinely believes he is another person. And he's addicted to it. So, when The Riddler comes along and calls him out, Bruce is almost more afraid of his identity being leaked than dying.

"I love the relationship between Batman and Jim Gordon because, at this point, he's not even known as Batman in the city. He's just some guy with an outfit on, and Gordon is really out on a limb. Batman has some advanced, futuristic technology in this movie but not really. He's just a guy who Gordon believes in. Bruce values this because, at this point in the story, not even Alfred believes that the Batman persona is a good idea."

"The fact that the character has been reinterpreted so many times shows there are so many different ways one can play it, even when one's face is half-hidden. You can put Batman into so many different genres and contexts. And given the legacy of the people that have been involved... it's a massive privilege. When you put on the suit for the first time, you can feel it. I could see my shadow falling across the parking lot as I was walking. It was really strange."

2. Zoe Kravitz on... conveying the essence of Selina Kyle

"It's rare to have a character whose physicality is equally important as anything else you're going to do. We had an incredible stunt coordinator named Rob Alonso who was so interested in who these people were, and where they were emotionally. He found ways to incorporate that into the stunt choreography.

"I did watch plenty of cat videos, and I loved the mystery behind the way they moved. I wanted to bring that elegance and confidence to the role of Selina. Rob Alonso was actually my taekwondo teacher when I was eight years old. I actually have a photo of me and Rob. It's crazy that he was once teaching me that, and now we've made The Batman together."

3. Paul Dano on... his love of Jim Carrey's Riddler

"Jim Carrey was one of my favourite actors growing up. I was obsessed with him when I was in late elementary school. Incidentally, Jack Nicholson was my other favourite actor when I was younger, and like Jim Carrey, he's also part of Batman history.

"I didn't really have to think about it, but maybe, subconsciously, [Jim Carrey's Riddler] informed me somehow. Those performances are indelible to me. The key to making it one's own, or to finding a singular approach, is to make it as personal and emotional as possible. I don't mean this in an egotistical way but, at the end of the day, it's about what you have to offer this character. You can't really go where others have gone."

4. Jeffrey Wright on... the relevance of this new Batman movie

"Every Batman movie has come before has been a film for its time. What really excited me about this script and Matt's vision was that he was making a Batman for now. Really honouring the entire history of the franchise, from 1939 to today, while infusing it with relevance to a 21st-century Gotham. It will be thrilling for fans because it's modern, it's now and yet it's also based on the mystery origins of the characters.

"Yes, it's a Batman movie and infused with all this kinetic energy. But Matt also wanted to create something that was really layered and plot-driven, something that was focused on mystery. Batman's detective work being central to the storyline allowed Matt to do that. Matt also wanted to pay homage to the movies that he loved growing up, as did I. We're about the same age. You know, the Sidney Lumet stuff and all that. The French Connection. All the President's Men. That golden age of American cinema in the 1970s."

5. Zoe Kravitz on... finding the real character behind the icon

"It was intimidating. Half the battle is putting to one side the notion of these being iconic characters. In order to honour who these characters are, and to play them as three-dimensional people, you have to play them as human beings in a given situation. The wigs were so fun, and the idea of Selina working in this industrial, underground club was really cool. We're meeting Selina really early in her story, so we're hinting at the latex Catwoman suit that we know and love. She is playing this character all the time.

"What's amazing is that this film really works even if you remove the iconography. It really flows together. It's a testament to Matt Reeves' genius."

6. Paul Dano on... getting into the mindset of The Riddler

"Matt gave us a real gift with a beautifully realised script that was the entire foundation. He offers us the chance to do something more grounded and psychological while also serving the archetypal duty towards the mythology.

"There was a lot there on the page and Matt certainly had real-life influences such as the Zodiac killer. We did work together very closely on the costume because that's extremely important. You try to imbue it with the energy. I needed that mask to carry some of the character for me, like Rob has been explaining about the Batman suit. Finding the right mask, that allows something powerful to come through. It's a powerless character who is allowed to be made powerful. I think it's an effective costume. It's fairly upsetting.

"Matt wrote the Nirvana song 'Something in the Way' into the script. I found that to be incredibly potent and powerful, the lyrics and the vibration. Later in the film, Matt also used an Aaron Copland cue called 'Fanfare for the Common Man,' which has this deeply ironic, quintessentially American, and heroic sound. That allowed me to bring something extra to the character. I will say that my relationship with 'Ave Maria' is permanently scarred!"

7. Jeffrey Wright on... the relationship between Batman and Jim Gordon

"There's a scene that we shot on the very first day, the one where the two characters walk into the crime scene and it's filled with cops. The cops are all looking at Batman through a strange lens and wondering not only who he is but why Gordon is aligned with him.

"Immediately, these two characters are isolated together, I think, out of a type of desperation and a utility, and we drive on from there via the detective work, which again goes back to the detective origins in the comics. That's what Matt wanted to celebrate, the notion of Batman as the world's greatest detective."

8. Robert Pattinson on... the moment when he truly became Batman

"They built eight blocks of Gotham out at Leavesden Studios. There was one day when there were a lot of extras playing American cops and civilians. I was walking across the imitation street and the cape was blowing in the wind. It was interesting because they were all English extras, and all I was hearing was: [adopts Cockney accent] "Alright, Batman?" I was just like, "SILENCE, English peasant!"

Click here to book your tickets for The Batman, opening in Cineworld cinemas on 4th March.