Sometimes, a hero is only as good as their sidekick, and this is clearly something that Harrison Ford understands. The veteran A-lister has stood alongside some outstanding sidekicks over the years, with his canine co-star from the upcoming family adventure flick The Call of the Wild, Buck, looking to place highly on the list.

Buck is a family dog whose blissful domestic life gets turned upside down when he is suddenly uprooted from his California home and transplanted to the snow-blasted wilds of the Alaskan Yukon. As the newest rookie on a mail-delivery dog sled team, Buck experiences the adventure of a lifetime as he ultimately finds his true place in the world.

The movie is adapted from Jack London’s classic 1903 story, and stars Ford as John Thornton, Buck’s new owner and eventual best friend. Before we enjoy the partnership of Buck and Thornton, here are a few other stand-out Harrison Ford sidekicks…

Much more than a walking carpet, loveable Wookie Chewbacca (originally played by Peter Mayhew) is Han Solo’s (Ford) best friend in the entire galaxy. Throughout the Star Wars series, Chewbacca and loveable rogue Solo have a bond tighter than any other. Han can even inexplicably understand the roars and growls of Chewbacca, presumably because they also share the universal language of friendship.

That makes it all the more tragic when Chewie is witness to Han’s death at the hands of son Kylo Ren/Ben Solo (Adam Driver) in 2015’s The Force Awakens; however, we did get the spirited origin story of how the two characters first met in 2018’s Solo: A Star Wars Story. In that movie, Chewie was played by Joonas Suotamo, and the younger Han by Alden Ehrenreich.

Archaeologist adventurer and cinematic icon Indiana Jones needs all the help he can get when he comes up against the Nazis. Thankfully, he has John Rhys-Davies’ Sallah by his side on the quest for the Ark of the Covenant. The two first formed an inseparable bond in classic adventure Raiders of the Lost Ark, the first movie in Steven Spielberg's rip-roaring Indiana Jones series.

Described by Indy himself as "the best digger in Egypt", Sallah is apprehensive about taking on the mission, but as with all the best sidekicks, he cannot let Indiana do it alone. Sallah may be loud and brash but he is a fierce friend, saving Indy from numerous scrapes, as well as being very handy in a fistfight.

Whether Indiana Jones should be taking an 11-year-old Chinese kid on dangerous adventures is open to debate, but Short Round (Ke Huy Quan) certainly proves himself to be a useful sidekick in the second Indy movie, The Temple of Doom.

The pair are tasked with tracking down a powerful, ancient stone that has been stolen by evil sacrificial priest Mola Ram (Amrish Puri), and secreted in the subterranean Temple of Doom. Short Round provides ample assistance to Dr Jones throughout, proving to be a more than capable driver and fighter, and saving Indy’s life on more than one occasion.

Comic book adaptation Cowboys & Aliens stars Harrison Ford as the grouchy Colonel Woodrow Dolarhyde. A powerful cattleman, Dolarhyde is in desperate need of his Native American right-hand man Nat Colorado (Adam Beach), after his son is kidnapped by the titular extra-terrestrials. And is Nat ever useful.

Essentially a Native American cowboy/detective, Nat is able to track, hunt and kill the technologically superior aliens, all while bearing the brunt of Dolarhyde’s gruff, dismissive and frankly rude demeanour. In the end, though, the cantankerous cattleman does come to realise how special his sidekick really is.

Although acclaimed sci-fi sequel Blade Runner 2049 focuses on Ryan Gosling's Blade Runner character K, the movie also sees the return of original Blade Runner character Rick Deckard, played by Ford. With his incredible detective skills and enhanced strength, K’s help is crucial in tracking down Deckard’s mysterious replicant child, and, like many of Ford’s silver screen sidekicks, he saves his life more than once.

Click here to book your tickets for The Call of the Wild, opening in Cineworld cinemas on the 19th of February. Tweet us your favourite Harrison Ford sidekicks @Cineworld. 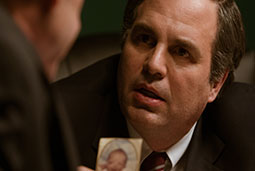