Top Gun: a maverick's guide to the Tom Cruise blockbuster

2020 is set to bring its fair share of highly anticipated releases. One of those at the top of our list is Top Gun: Maverick, the long-awaited sequel to one of Tom Cruise’s most famous films.

It’s been 34 years since Top Gun was released, so people might need a little bit of a beginner’s guide. So whether you’ve never seen the original movie, or you’re simply looking for a little bit of a refresher in anticipation of this December, keep reading because we’ve got you covered…

Based on an article of the same name published in California magazine three years prior, Top Gun centres on a group of students at the elite United States Navy Fighter Weapons School, and the reckless but daring young pilot who defies the teachings of the class at the hands of a civilian instructor.

Cruise plays Pete “Maverick” Mitchell, the hotshot pilot in question who angers his superiors at Top Gun Academy. Following the death of his wingman Goose (Anthony Edwards) during a training exercise, Maverick is overcome with guilt and considers retiring from flying. With the help of the rest of the team, he eventually regains his confidence and ultimately proves his bravery when he and Iceman provide support to a stricken ship in a high stakes operation.

Top Gun was directed by the late Tony Scott (Ridley Scott's brother) from a screenplay written by Jim Cash and Jack Epps Jr. The cast rounded up a clutch of eighties newcomers and veterans, including Val Kilmer as Maverick’s rival Iceman, Meg Ryan, Tom Skeritt and Tim Robbins. The film's enjoyably cheesy macho air gave rise to any number of classic lines ("I feel the need... The need for speed!") and much-parodied moments, including the infamous, shirtless beach volleyball scene.

Produced by Jerry Bruckheimer and Don Simpson, who were the kings of the eighties/nineties high gloss action movie, Top Gun launched Cruise into one of the most successful Hollywood careers of any actor, transforming the cocky kid from 1983 comedy Risky Business into a bonafide star who could carry his own film. The blockbusting likes of the Mission: Impossible franchise owe themselves to Top Gun.

Despite mixed reviews upon its initial release, Top Gun was an enormous hit with the general public and went on to make over $350 million worldwide against a budget of $15 million. Along with the commercial success, the film’s theme 'Take My Breath Away' by Berlin won the Oscar for Best Original Song.

The soundtrack (also including ‘Danger Zone’ by Kenny Loggins) was one of the best-selling albums of 1986 and remains one of the most popular movie soundtracks to date, achieving Platinum record status. The film’s slick visual style and inescapably eighties music continues to resonate as an emblem of the MTV pop video era.

Although it’s more than 30 years old, Top Gun still remains popular in our culture today, and was even re-released in IMAX 3D back in 2013. In 2015, it was selected by the United States Library of Congress for preservation in the National Film Registry, an honour granted only to films that are believed to be “culturally, historically, or aesthetically significant”.

Not much is known about the plot of Top Gun: Maverick, despite the release just being a few months away. It is, however, directed by Joseph Kosinski, who worked with Cruise on 2013 sci-fi action movie Oblivion, and will be getting an injection of energy from composer Hans Zimmer, who collaborates with the first film’s Harold Faltermeyer.

We do know that 34 years after the events of the Top Gun, Cruise’s Maverick has become an instructor to a group of new cadets at Top Gun Academy. This time around, he comes face-to-face with one Bradley Bradshaw, the son of his late best friend, Goose. The character is played by Whiplash scene-stealer Miles Teller (Whiplash), and we cannot wait to see him go toe-to-toe with Cruise, as all that anguished family history bursts out more than three decades later.

Little is known about the roles the newcomers are playing so far, although actor Glen Powell (best known for Richard Linklater’s Everybody Wants Some!) initially auditioned for Teller’s role. Powell reportedly impressed Cruise so much during his auditions that his role was enlarged.

The Top Gun sequel has been in development since 2010 before official confirmation came along in 2017. Originally scheduled for release in July 2019, it was ultimately pushed back to 2020. The first trailer was revealed at San Diego Comic-Con in July 2019 to rave reactions, and with the rumours that Kenny Loggins is recording a new version of the iconic “Danger Zone” to be featured in the film, July just cannot come soon enough.

Top Gun: Maverick is released in Cineworld cinemas on 23rd December. Let us know @Cineworld if you feel the need for speed. 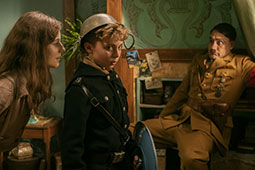 6 Cineworld movie releases to get you through Blue Monday