Home Cineworld Blog What's on at Cineworld this week: The Menu and more 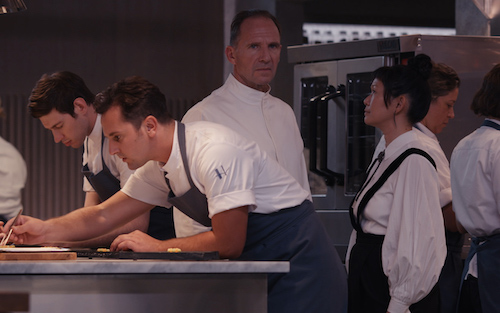 ON RELEASE AT CINEWORLD THIS WEEK

Ralph Fiennes is on diabolically entertaining form in this darkly comic skewering of the pretentious gastronomy scene. Fiennes plays a well-regarded yet mysterious chef who invites a cadre of snooty individuals and critics, each with their own skeletons in the closet, to a remote island restaurant experience that turns increasingly interactive and shocking.

Anya Taylor-Joy, Nicholas Hoult, Hong Chau, John Leguizamo and Janet McTeer round out the excellent cast in a movie that will have you thinking twice about Michelin-starred extravaganzas.

Click here to book your tickets for The Menu.

Suave Mad Men star Jon Hamm demonstrates his comic chops in this affectionate and funny adaptation of Gregory McDonald's novel. (It is, in fact, the third movie in the Fletch series, which helped propel Chevy Chase to stardom in the 1980s.)

The charming and troublesome Fletch becomes the prime suspect in a murder case while searching for a stolen art collection. The only way to prove his innocence? Find out which of the long list of suspects is the culprit—from the eccentric art dealer and a missing playboy to a crazy neighbour and Fletch’s Italian girlfriend.

Click here to book your tickets for Confess Fletch.

Acclaimed director James Gray (The Lost City of Z; Ad Astra) delivers his most personal work to date. Gray adapts his own childhood in New York, bringing us the story of two young friends who are torn asunder by the harsh realities of racism and bigotry.

Click here to book your tickets for Armageddon Time.

Knebworth 22 is a new feature-length documentary that traces Liam Gallagher back to the site of his former band’s defining performances, including all-new interviews, behind-the-scenes and concert footage captured from 20 camera positions.

The film also goes a little bit further, seeking out stories and perspectives from collaborators and fans of different generations from around the world, transposing the emotional and social context of the 90s’ shows versus the tumult of our current era.

Click here to book your tickets for Liam Gallagher Knebworth '22.

How many times have you watched the Black Panther sequel already? You can always fit in another journey to Wakanda, right? All the better for soaking up this mega-budget celebration of the late Chadwick Boseman's legacy, one that rounds off Phase Four of the Marvel Cinematic Universe while anticipating bold new horizons in the franchise.

Letitia Wright's Shuri and Angela Bassett's Ramonda now take centre stage, compelled to balance a sense of grief with a brand new threat in the form of Talocan leader Namor (Tenoch Huerta). Don't miss your chance to soak up the massive action sequences and pathos-laden character moments in the latest onslaught of Marvel spectacle.

Don't forget that with a Cineworld Unlimited membership, you can feast on all these films, and lots more besides, from just £10.99 a month. Find out more about Unlimited here.