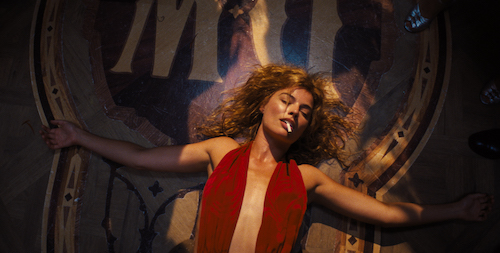 When a ghoulish-looking Tobey Maguire with yellowed teeth isn't the maddest thing in a movie, you know you've got a heck of a trip on your hands. So it goes with Babylon, the no-holds-barred, bacchanalian onslaught from Oscar-winning La La Land filmmaker Damien Chazelle.

The movie throws us in at the deep end at a pivotal moment in cinema history. As silent cinema prepares to transition to talking pictures, a rogue's gallery of oddball characters is finding its true expression both on and off camera.

Brad Pitt's Jack Conrad has helped embolden the status of actors in Tinseltown, even as his own career threatens to stare into the abyss. Margot Robbie's coke-sniffing, hard-drinking party animal Nellie LaRoy goes hog wild and prepares to fight snakes. And Diego Calva's relatively (we stress, relatively) innocent outsider is simply attempting to navigate the blitz while emerging with his morals intact.

As one would expect, Chazelle's camera is lively and restless, turning a grotesque circus of human behaviour into a virtuoso display of cinematic flair. The pounding jazz soundtrack from Justin Hurwitz (Oscar winner for La La Land) is nothing less than a symphony of excess, blasting away any preconceived notions we might have had about early Hollywood being polite and genteel.

Jean Smart, Jovan Adepo, Samara Weaving and Li Jun Li round out the intriguing cast. Check out the new trailer below and prepare to head to Babylon on January 20, 2023. You can now book your tickets here.

Will it be a contender at the Academy Awards? Be sure to keep up to date with our Oscars 2023 coverage.