Stuck in limbo awaiting the arrival of your favourite films? Well, we've rounded up all the new blockbuster release dates in one place, including the newly re-arranged Marvel Phase Four slate.

Stretching from 2022 to 2028, here's how your movie calendar is shaping up. (The following dates are subject to regular changes owing to the shifting release schedule. UK and Ireland release dates are accurate at the time of publication, as per the Film Distributors' Association. Certain dates indicate US releasing where UK has not yet been confirmed.)

And here's a breakdown of each individual movie in greater detail.

The much-loved Crawley aristocracy once more throws open its doors in this follow-up to the blockbusting Downton Abbey movie. Scripted, as before, by the creator of the original ITV series, Julian Fellowes, A New Era is crowned by a series of familiar faces, including Maggie Smith's splendidly acidic Dowager Countess.

2. Doctor Strange In The Multiverse Of Madness

Tom Cruise feels the need for speed once again, reprising his role as cocky fighter pilot Maverick in the long-overdue Top Gun sequel. This time, Maverick is older and schooling a group of new Top Gun cadets – but he's still got that rogueish twinkle in his eye. Watch out for Miles Teller as Bradley, son of Maverick's late wingman Goose (Anthony Edwards).

Colin Trevorrow returns to the director's chair for the third and final instalment of the Jurassic World trilogy. Picking up where 2018's Fallen Kingdom left off, we're now about to be presented with a vision of the future where human and dinosaur have been forced to co-exist. Chris Pratt and Bryce Dallas Howard are back as heroes Owen and Claire. Even better, the original Jurassic Park trio of Sam Neill, Laura Dern and Jeff Goldblum will be returning to the arena of prehistoric mayhem.

The versatile Ethan Hawke makes a rare pivot into villainy in this chilling tale from Sinister and Doctor Strange director Scott Derrickson. When Hawke's masked psychopath kidnaps a young girl, he underestimates her tenacity, not to mention her apparent psychic connection with his previous victims...

The life story of The King of Rock and Roll is sure to make for an eye-popping, hip-shaking cinematic experience, especially when it's marshalled by Moulin Rouge! director Baz Luhrmann. Once Upon a Time in Hollywood's Austin Butler portrays Elvis Presley, and Tom Hanks plays Elvis' controversially controlling manager Colonel Tom Parker.

8. Minions: The Rise Of Gru

We could all do with our own handy lockdown helpers at the moment. But we wouldn't want to rely on those mischievous minions to keep our homes in order. Following the 2015 blockbuster spin-off movie Minions, the cheeky sidekicks return alongside a youthful Gru (Steve Carell), in a family adventure exploring the title character's rise to world domination.

Oscar-winning director of Get Out and Us, Jordan Peele, has made his mark with two coruscatingly funny yet scary horror-comedies. Both of Peele's movies have spoken of racial intolerance and hypocrisy, packaging them up in audience-friendly, spine-tingling narratives. In 2022, he returns with his mysterious new project, another collaboration with distributor Universal (who are also working separately with Peele on a remake of Wes Craven's cult classic The People Under the Stairs).

11. Where the Crawdads Sing

You may know Superman – but what about his beloved canine companion? Meet Krypto, the lead character of the animated adventure DC League of Super-Pets, and voice by the ubiquitous Dwayne Johnson. Krypto must team up with fellow mutt Ace (voiced by Johnson's Jumanji co-star Kevin Hart) to save the day when the Justice League members are kidnapped by the nefarious Lex Luthor (Marc Maron).

Back in 2019, actor Olivia Wilde turned director for the first time, with spectacular results. The movie, Booksmart, was acclaimed for its incisive and hilarious look at high-school relationships, but Don't Worry Darling is a different kettle of fish, a creepy story of fragmenting domestic unease set in the 1950s. Florence Pugh and Harry Styles star.

14. Spider-Man: Across the Spider-Verse

Best Spider-Man movie ever? For many fans, Spider-Man: Into The Spider-Verse netted the perfect balance between gorgeous animated visuals, heartfelt characters and razor-sharp, self-referential nods to Spider-Man lore. That's the kind of thing we've come to expect from producers Phil Lord and Chris Miller, the bods behind The LEGO Movie, and they're returning to steer Miles Morales (Shameik Moore) though another surreal Spider-Verse odyssey.

Dwayne Johnson leads and produces this DC Comics adaptation. He plays the eponymous Black Adam, best known as the nemesis of Shazam. According to Johnson, the Black Adam film, directed by Jaume Collet-Serra, will introduce us to the Justice Society of America. In DC terms, this band of characters pre-dated the Justice League, and initially consisted of Doctor Fate, Hour-Man, Spectre, Sandman, Atom, Flash, Green Lantern, and Hawkman.

Released in 2018, Black Panther was not just a movie but a cultural event, re-setting the balance for portrayals of black superheroes the world over. (Don't forget, however, that 1998's Blade was the first.) Of course, in the wake of Chadwick Boseman's death, we wait to see what Marvel will do with the role of T'Challa, although in more positive news, Ryan Coogler is returning as director.

In 2019, DC comic book origin story Shazam emerged as a delightful surprise. Asher Angel delivered a star-making turn as the young orphan teen who finds he can transform into a superhero, played with exuberance and verve by Zachary Levi. There isn't much word on the sequel so far, but the cast and director David F. Sandberg are all set to return.

More than a decade after the world-conquering success of Avatar, director James Cameron transports us back to Pandora. The pioneering CGI motion capture technology will once again be out in full force, as we're introduced to the planet's underwater realm. New tribes of the indigenous Na'Vi will be introduced, along with new cast faces Kate Winslet and Michelle Yeoh. Somehow, Sigourney Weaver is returning from the dead as Dr. Grace Augustine – we can't wait to see how they explain that one. Meanwhile, in the lead roles, Sam Worthington and Zoe Saldana are back from the original movie, which grossed more than $2 billion worldwide.

Brie Larson's Marvel superhero made her solo movie debut in 2019, having been teased in 2018's Avengers: Infinity War. She helped save the day in 2019's Avengers: Endgame, working to bring down the evil Thanos (Josh Brolin), so surely everything after that is going to be a walk in the park? Candyman's Nia DaCosta directs.

20. Aquaman and the Lost Kingdom

Do we have permission to board the DC Aquaman sequel? You bet we do. Having reclaimed the throne of Atlantis in 2018's Aquaman, Jason Momoa's hunk out of water now returns for his follow-up adventure. James Wan's movie reunites all of the original property's cast members including Amber Heard, Willem Dafoe, Patrick Wilson, Dolph Lundgren, Yahya Abdul-Mateen II, Temuera Morrison, and Nicole Kidman.

Stash away those pencils and library books, because Keanu Reeves' sartorially stylish badass is back for another dose of violent action. The first three John Wick movies mixed arresting visuals with kinetic action sequences, adding another classic anti-hero to Reeves' roster. The third and most recent movie ended with the thought-to-be-dead Wick returning to the Bowery King (Laurence Fishburne) to seek revenge against the High Table. There will most certainly be blood...

James Gunn marshals our favourite rag-tag mob of intergalactic misfits in their third adventure. Chris Pratt's Star Lord, Zoe Saldana's Gamora, Bradley Cooper's Rocket Racoon and Vin Diesel's Groot are all set to return, in a storyline that picks up after the events of Thor: Love and Thunder. Can we expect Chris Hemsworth's brawny god to make an appearance?

If the next Fast & Furious movie isn't called Fast-ten Your Seatbelts, then we give up. Vin Diesel's Dominic Toretto once again fires up the nos in what's rumoured to be the final saga instalment of the blockbusting automotive franchise.

IT director Andy Muschietti is set to bring us the solo feature film movie about Barry Allen, aka The Flash. The DC superhero, who can move faster than any of us can comprehend, has been embodied on the big screen by Ezra Miller in 2017's Justice League. And he's set to reprise his role in a movie that shows us how The Flash came to be.

Harrison Ford cracks the whip again as the world's greatest archaeologist adventurer. Significantly, this is the first Indy movie not to be helmed by Steven Spielberg – instead, Logan and Le Mans '66 director James Mangold takes over. Mads Mikkelsen and Phoebe Waller-Bridge co-star.

Mission: Impossible - Fallout had us hanging onto our seats, courtesy of director Christopher McQuarrie and star Tom Cruise's astonishing stunt work. That final helicopter chase/barrel roll sequence is one of the most impressive action sequences in many years. Goodness knows how they'll top it in the seventh instalment of Ethan Hunt's adventures, but Cruise will no doubt be finding many more ways to give his insurance company the sweats. Simon Pegg, Rebecca Ferguson and Vanessa Kirby are all returning, as is Henry Czerny, reprising his role as Kittridge from the first Mission: Impossible movie.

28. Ant-Man and The Wasp: Quantumania

The Marvel Cinematic Universe returns to the Quantum Realm as Paul Rudd and Evangeline Lilly's shrinking superheroes team up once again.

Having fought off the megalodon in 2018's The Meg, our favourite hardman Jason Statham is back to lay another smackdown on the pesky Carcharodon carcharias. Meg 2: The Trench makes the mainstream Hollywood debut of idiosyncratic British director Ben Wheatley, best known for his twisted, blackly comic horrors such as Kill List. This will be interesting...

Dune star Timotheé Chalamet transports us into a world of pure imagination in this Willy Wonka prequel movie. We'll discover the origins of the beloved Roald Dahl character in this sure-to-be-magical movie from Paddington director Paul King.

Hot on the heels of Ethan Hunt's seventh world-saving adventure comes his eighth. Details are currently thin on the ground, but we do know that the seventh and eighth instalments were due to be filmed back to back. Circumstances surrounding the pandemic have now changed the game, so we wait to see how the blockbusting Mission: Impossible franchise will evolve.

You can never have too much Gru in your life. Steve Carell's baldy baddie and his ever-loyal Minions will return for a fourth instalment of madcap mayhem, so can we hear a 'nee naw' in response?

The original superhero family finally, finally falls under the umbrella of the Marvel Cinematic Universe, with Spider-Man director Jon Watts in charge.

Disney's live-action remake of their 1989 animated masterpiece has confirmed its cast. Halle Bailey is Ariel, Melissa McCarthy is Ursula, Javier Bardem is King Triton, Daveed Diggs is Sebastian, Jonah Hauer-King is Eric, Jacob Tremblay is Flounder and Awkwafina is Scuttle.

Which of these movies are you most excited about seeing on the big screen? Let us know @Cineworld. 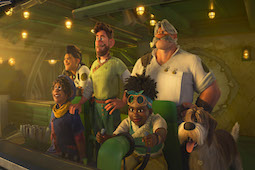 Experience our premium formats for less: watch any movie in 4DX, ScreenX or RealD 3D at a reduced price 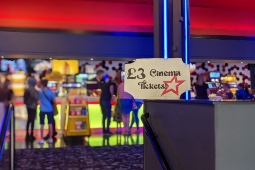 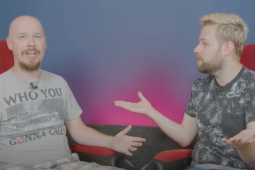 What's On At Cineworld: Luke and Dan discuss what to watch on National Cinema Day 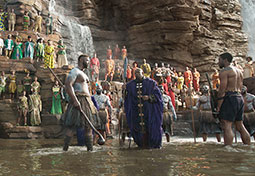 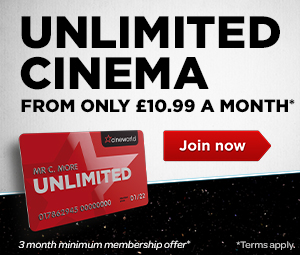