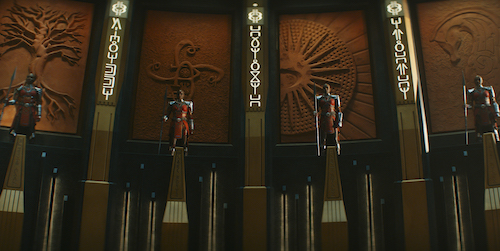 Marvel Studios' Black Panther: Wakanda Forever is almost upon us. The spectacular-looking follow-up to the sensational Black Panther (2018) bids farewell to Chadwick Boseman and concludes Phase Four of the Marvel Cinematic Universe (MCU).

The review embargo has ended and the critical verdict is in. Does Ryan Coogler fashion a worthy sequel to his original movie? How successfully do Letitia Wright, Angela Bassett and the other cast members step up in light of Boseman's absence? And what kind of threat is posed by the Atlantean king Namor, played by Tenoch Huerta?

Find out all this and more in our curated sample of reviews below.

How does the movie address Chadwick Boseman's passing?

Kambole Campbell, Empire: "For all of its blockbuster bombast and globe-trotting conflict, Black Panther: Wakanda Forever is, in a sense, framed around just one person: Chadwick Boseman. The loss of the Black Panther star, who tragically died in 2020, isn’t just taken as a logistical problem for the franchise to fix. There’s real pain behind this film. In addressing Boseman's passing, returning director/co-writer Ryan Coogler and co-writer Joe Robert Cole movingly and tastefully blur the lines between the real and the fictional.

"The tragic circumstances lead to an increased focus on this formerly supporting cast, but the shift feels natural., and there are strong, absorbing performances across the board. In particular, Letitia Wright — stepping up into a leading role — finds compelling volatility for Shuri to take the spotlight. Elsewhere, Winston Duke’s bluster is still a joy to watch; Angela Bassett is commanding and heartbreaking; newcomers like Michaela Coel (as Dora Milaje warrior Aneka) fit in as though they were always there.

"In the same sense, the film can feel overly busy. Coogler’s script sometimes strains at having to stuff it all in, from the fallout of T’Challa’s death, to the geopolitical turmoil between Wakanda and Talokan, to the usual extended-universe baggage. It all sprawls into a messy last act that can feel at odds with the rest of the film. But Wakanda Forever ultimately lands on a poignant note."

How successfully does the movie foreground its women characters?

Leah Greenblatt, Entertainment Weekly: "The most striking thing about the movie, though, may be what a matriarchy it is, both by nature and nurture: Without their king, Wakanda has become a queendom from the top down, overseen by Bassett's regal, ageless Ramonda, the gorgeously daunting Gurira, and Wright, who rises to fill her dramatically expanded role with feline grace and vulnerability. Coogler also stacks his backline with talented women, including production designer Hannah Beachler and costumer Ruth E. Carter, who both won well-deserved Oscars for the first film.

"Their shared vision of Afro-futurism feels lush and joyful and beautifully specific set against the usual white noise of Marvel fanfare, even (or almost especially) in darker moments, like the pristine rituals of a funeral scene. Wakanda is still clearly a Marvel property, with all the for-the-fans story beats and secondary characters its ever-expanding universe requires, but it also feels apart from anyone that's come before."

How does the movie address Shuri's role?

Owen Gleiberman, Variety: "Watching Wakanda Forever, it’s almost unavoidable that we feel the absence of Boseman’s heroic dramatic center of gravity. The movie doesn’t have the classic comic-book pow of “Black Panther,” and it’s easily 20 minutes too long (we could probably have lived without the Talokan backstory). Yet Wakanda Forever has a slow-burn emotional suspense. Once the film starts to gather steam, it doesn’t let up.

"The pivotal character is Shuri, and we’re with her on every step of her evolution from wary, desolate tech-head to underground politician to do-or-die action heroine."

In what way is the movie about the grieving process?

Dylan Roth, Observer: "Throughout the film, their differing processes of grief are touching and sincere without ever veering into treacly or exploitative, and the film is extremely selective about the use of Boseman’s likeness.

"What might be most remarkable about the handling of Boseman’s absence in Wakanda Forever (and I mean this in the most complimentary way) is that it never feels like he is missing from the film. Instead of having one performer take Boseman’s place as the lead of the sequel, everyone steps up. Wakanda Forever isn’t missing a Black Panther; the rest of the ensemble grows closer together such that there is no vacuum left to fill."

Is the movie a visual treat for the senses?

"Together, they present an arresting series of images: a mother cradles her baby in shallow waters, lit by a few rays of sunlight. A house burns, its flames licking the sky. A coat splays out in crinkled shades of yellow and blue, like the sun bleeding into the sea. Although questions of life and legacy are not always explicitly written in Wakanda Forever, they haunt the film in its most poignant vignettes."

How successfully does the movie introduce Riri Williams/Ironheart?

Tom Jorgensen, IGN: "Riri’s personality is infectious, and her appearance certainly sets an intriguing stage for Disney+’s Ironheart series, but Wakanda Forever bends over backwards and burns valuable time on keeping her involved in the action far past the point of believability.

"The saving grace there is that Riri gives Shuri someone to act as an older sibling (or a Tony Stark) for as a means of celebrating T’Challa, something that Coogler takes maybe too light a touch in highlighting."

What about the handling of the new Black Panther?

David Rooney, The Hollywood Reporter: "Of course, any halfway attentive Marvel fan will know that a new Black Panther must emerge as the stakes are heightened and the threat intensifies, and despite Disney urging early audiences to avoid spoilers, the identity of that new protector swiftly leaked out.

"Not that it was so hard to guess. But the process of discovery — which happens via a visit to the ancestral plane, complete with superstar cameo — remains suspenseful and exhilarating, especially once the new, improved Panther suit gets put into action.

"It’s impossible for Wakanda Forever to match the breakthrough impact of its predecessor, but in terms of continuing the saga while paving the way for future installments, it’s amply satisfying."

Where does the movie leave the MCU?

Brina Truitt, USA Today: "Wakanda Forever doesn’t quite live up to its predecessor, a remarkable effort that brought together Boseman’s gravitas and masterful performance with Coogler’s gift for worldly narrative.

"But the sequel offers a similar technical achievement – the costumes and production design are simply awesome – and plot points in the original movie pay off and have consequences in the latest film, which also handles T'Challa's death in a very real and authentic fashion. The new Black Panther celebrates and honors its fallen hero, at the same time showing that this corner of the MCU remains in extremely capable hands."

It will soon be time for you to cast your own verdict on the Black Panther sequel. Black Panther: Wakanda Forever is released at Cineworld cinemas on November 11.