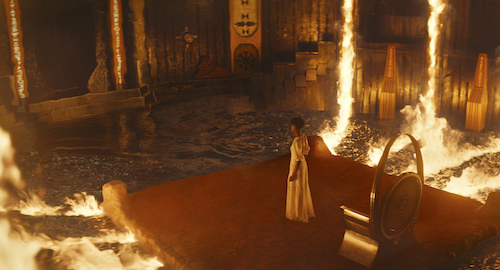 No Marvel movie prior to Black Panther: Wakanda Forever has had to grapple with the death of its leading actor. Following the tragic passing of Chadwick Boseman in August 2020, writer/director Ryan Coogler, who transformed the first movie into a huge cultural phenomenon, was forced to grapple with an acutely difficult and overwhelming situation.

How does one honour the legacy of a much-loved actor while handing his character's mantle over to somebody else? Unsurprisingly, Coogler says that Boseman's absence prompted a wholesale rethink of the Wakanda Forever script, which had been written just prior to Boseman's death.

“I had just finished it," Coogler told The Official Black Panther Podcast (via Collider). "My last conversation with him was calling him and asking if he wanted to read it before I got notes from the studio. That was the last time we spoke, and he passed maybe a couple of weeks after I finished. […] He was tired, bro. I could tell he was tired. I’d been trying to get a hold of him for a few days. […] I could tell something was up.

"But he was joking and laughing, talking about how he was planning a wedding in South Carolina, talking about the people he was going to invite. […] And then he said he didn’t want to read it, because he didn’t want to get in the way of whatever notes the studio might have, so he was like ‘It’s better if I read it later.’ But I found out later that he was too tired to read anything.”

Coogler continued: “The second script was like a T’Challa vehicle. I was like, ‘ok, we set the world up, now we’re going to do the deepest dive into this guy that you can imagine. And that was what excited me even more: I knew Chad[wick Boseman] better as a performer, and I knew him better as a guy, [and] T’Challa as a character after making that first film. So I got to writing that thing immediately.”

In fact, the original script for Wakanda Forever was designed to capitalise on the emotional fallout from Avengers: Endgame.

“The tone was going to be similar,” Coogler told Inverse. “[T'Challa] was going to be grieving the loss of time, you know, coming back after being gone for five years. As a man with so much responsibility to so many, coming back after a forced five years absence, that’s what the film was tackling. He was grieving time he couldn’t get back. Grief was a big part of it."

Although the script was reworked, Coogler stresses that Atlantean leader Namor was "always there" in the original draft. In Wakanda Forever, the ruler of the underwater kingdom (played by Tenoch Huerta) rises up to lay waste to Wakanda after he feels threatened by T'Challa's United Nations disclosure.

Despite the reliable presence of spectacle and several sensational set-pieces, Wakanda Forever's most resonant scenes revolve around Boseman's physical absence. The actor's death has transformed the movie, resulting in a far deeper film that deals more openly with the themes of grief and despair. It has also prompted discussion as to who the new Black Panther is.

Watch Black Panther: Wakanda Forever at Cineworld from November 11 and discover how the filmmakers have done justice to Chadwick Boseman's legacy.